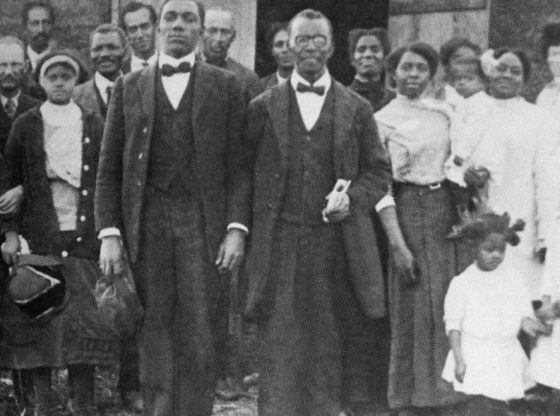 “Learn to do common things uncommonly well; we must always keep in mind that anything that helps fill the dinner pail is valuable.” – George Washington Carver

Freed slaves were among those who headed west in the years following the Civil War—because they wanted a new start, wanted to get far away from the culture that had kept them in bondage, and because, like most Americans, they had a glimmer of the country’s promise: land ownership, stewardship, and legacy.

In the early twentieth century, there were two kinds of homesteading initiatives in the Great Plains regions, also known as the American heartland. The first homesteaders had been drawn there by the Homestead Act(s) of 1862, enacted by President Lincoln, which promised a 160-acre tract of land to anyone who could maintain and improve it. Rich descriptions were created to bring the homesteaders from the East and even from troubled countries in Europe to try to farm and succeed in the goal of owning a piece of the good earth. One promise that dried up pretty fast was that of water supply—there wasn’t any. But in many places, sufficiency farming could keep a family alive, the sod could keep a roof over their heads, and some dry area crops could provide an income. If families grouped together, they could share the acreage and the work.

The second activity involved large-scale ranchers, who might make their fortune pretending to maintain homestead acreage, putting up a shack or two a hut that some hired cowpokes might “occupy” when the government inspectors came around, and use the land solely for grazing. The cattle industry was big and growing.

But the downside to ranching was that it didn’t increase real human population, which had been one of the unstated goals of the Homestead Acts in the first place. Get the eastern cities unclogged, accommodate the surge of immigrants flooding in, get some tax money from the new property owners, and take dominion over the heartland.

So, Congressman Moses Kinkaid from a district in Nebraska—a particularly dry, unattractive region known as the Sandhills that needed inhabiting—proposed a new iteration of the Homestead Act(s): larger plots (640 acres) on specifically arid lands. Yes, these lands were without water and no one was going to try to pretend any different. If this seems outrageous, it was; and yet a local resident reported that, “Two weeks before opening, covered wagons, horsebackers, men afoot, toiled into Alliance, got information at the land office, and vanished eastward over the level prairie” (Mari Sandoz, Old Jules). These hardy souls became known as Kinkaiders.

Among those piling into Nebraska and Kansas to get any land available at the time were the Exodusters (see my Homestead.org article The Exodusters – The Roots of African American Homesteading). Freed slaves had not been able to participate in some earlier acts because of the stipulation that homesteaders had to be citizens. But once they could, they were ready to roll those wagons westward.  Included in their number was the legendary George Washington Carver. These African Americans had multiple causes to impel them. They were celebrating newfound rights and freedoms, setting out on a new way of life that none of them had ever known—self-sufficiency—and many, being Christians, saw themselves as not unlike the children of Israel, shaking off the dust of old Pharaoh’s land, guided by holy scripture.

An early settlement of former slaves was established in Cherry County, Nebraska. Despite its cheery moniker, it was some of the worst land imaginable. Nothing was growing there, and arguably, nothing could. The courage of such settlers was immeasurable, maybe because what they left behind was so inhuman that anyplace might have looked like paradise.

Ava Speese Day was among the occupants of the little burg that was originally named DeWitty (after its first postmaster). Her family—mother Rosetta, father Charles, and eight siblings—started their homestead living in rented quarters, then in their own one-room sod house. Her father and his neighbors soon figured out that crops were not going to survive in the Sandhills, so that if they were going survive as a family, they’d need to raise and sell cattle. The land was giving back for their efforts, but the requirements of stock raising included as much buying as selling.

Why Was the Town Named Audacious?

DeWitty was renamed Audacious when Postmaster DeWitty left, presumably denoting not another postmaster had the guts and pure downright determination that it had taken for such people as the Speese and Day clans to migrate to and stay in such an inhospitable place.

Since little Ava Speese Day had known no other life than homesteading, her recollections of Audacious, Nebraska centered on the daily chores associated with tending animals. Her grandfather was a White man, her grandmother of African slave descent, but she avowed, “Color never made a difference to Grandpa.” Nor, it seemed, to the neighbors in the region. Ava Day records no painful incidents of racism. Neighbors White and Black would ask, “did you need anything from town—and brought it back by your house or left it at your gate.” She grew up with great reverence for education, and her writing, collected in a book called Sod House Memories, provides one of the more intimate pictures of life for African Americans and others on the Great Plains.

The child Ava watched as the sod house was built, the material lid like bricks. It was exciting to contemplate where each piece of furniture would sit and to realize it would be their very own. Curtains sectioned off the sleeping areas and a kitchen was, not surprisingly, the first additional room. Ava had recollections of using burnt corncobs as toothbrushes. And wearing clothes hand-sewn by her mother. The sod enclosure was plagued by dirt from the un-plastered interior. It was also infested with flies that could be gotten rid of by burning their wings off with old newspaper, but that brought a risk of setting fire to the papered ceiling (so the children never told their father they did it). Still, life in the sod dwelling was “heaven” to the young Ava.

She recalls vividly watching “trail herds”—that aggregation of traveling cattle and cowboys so dramatically depicted in the old Western “oater” movies. Sometimes, Ava said, the line of herders and cattle stretched three miles into the distance. Her schooling took place in a one-room schoolhouse, another beloved image from the movies and TV series like Little House on the Prairie. The school, like the community, was racially integrated. In school,she was taught that Knowledge is Power, a lesson she never forgot.

Entertainment was filled with music (Ava’s family had a “cottage organ”), dancing, food, and a local rodeo. The Black community—consisting at its height of forty families—maintained very strong social ties, with parties in various homes being the norm.

The Speese-Day family, about which much information has been gathered from various sources in Nebraska, a state very conscious of its homesteading heritage, was typical of many homesteaders, especially those shunted to the most arid regions of the Great Plains. They were pushed to their limits by the rigors of the prairie environment—freezing winters, blazing summers, a constant need for cash to replenish their businesses in a cashless world, and at times, sheer loneliness. The family left in 1925, moving to Pierre, South Dakota.

Ava makes a wise pronouncement about her childhood, writing retrospectively some years later. She opines that the homestead memoir had taken longer than she had expected, but “a way of life is not short. No, a way of life is not short.” Those words may give us pause. In moving to a homesteading life, we are leaving a “way of life” that we may have lost enthusiasm for; but remnants of it will always be with us. Similarly, if we move away from a homesteading environment, that “way of life” will also linger.

Scholars and academics have correctly pointed out that we lack much information about the experience of African American homesteaders and westward roamers. This is attributable to many factors—a dearth of education among those groups, a lack of a writing tradition among all of the early settlers, no matter where they hailed from, and, in the case of Black Americans, a lack of a welcoming press to which to promote one’s work. In the west, the racial bias was less, as Ava attested, but still existed here and there, then and now.

So, when homesteaders of today have the chance to read the vintage journals and pore through the memorabilia of pioneers like Ava Speese Day (now of course available online) we should take the opportunity to feel a kinship with the past and grow a commonality of purpose.

*Feature Photo at the top of the page is from the book “In Their Own Image” by the Great Plains Black History Museum. Click here to buy a copy.