“The days of wilderness adventure are not past!  The pioneer spirit is not dead!”  These stirring words were written by one of America’s best-known homestead practitioners, and one of its best-known writers on homesteading subjects: Laura Ingalls Wilder.  She wrote them in 1921.  It would be another ten years before Laura began to produce the creative work for which she is so fondly remembered, books about her childhood on the homestead that would be captured in the long-running TV series, Little House on the Prairie.

Laura was born in 1867 on a homestead in Wisconsin.  A replica of her childhood home—a plain, rough-log cabin that must have been cramped at best—is located there in Pepin County.  She was one of five children, with three sisters and a brother who died in infancy.  Her ancestry goes back to the original settlers in the Massachusetts Bay Colony and at Plymouth Rock.  Her father, Charles, was something of a wanderer.  The times were changing during that era; Abraham Lincoln signed the first Homestead Act in 1862, and folks were highly motivated to own a farm.  So the Ingalls family migrated from Wisconsin to Kansas to Minnesota to Iowa to South Dakota where, when Laura was 12, Charles filed for an official homestead claim near the village of De Smet. 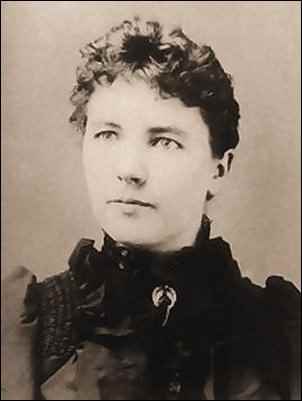 In South Dakota, Laura worked as a teacher starting at age 16.  She met and married Almanzo Wilder when she was 18.  Maybe, like her father, Laura was a bit footloose, because she and Almanzo, whom she nicknamed “Manly,” moved a lot, too.  At first they worked a farm focusing on a single crop—wheat—and endured the harsh northern winters with many disastrous occurrences.  Almanzo was permanently crippled by diphtheria; a fire burned down their grain-filled barn; a son died in infancy; and a daughter accidentally set their house on fire.  They headed to Florida in hopes of easing Manly’s ailments, but they did not take well to the humidity, so they wound up in Missouri in a homestead named Rocky Ridge Farm.  There they diversified their produce and lived in relative comfort, as much as a farming couple can.

At that point, Laura started to write for money, beginning with short articles and then her own column in the local paper.

Illustrative of her independent nature, Laura called her newspaper column “As a Farm Woman Thinks.”  This may have been the first time that many readers realized that a farm woman did think!  Her daughter, Rose, encouraged her in her writing career, and may have helped her by collaborating, polishing her work to some extent.  But for Laura, the big motivator for pushing herself to write anything beyond the occasional article, to begin writing her semi-autobiographical children’s stories, was money.  The family lost everything in the Stock Market Crash of 1929, and like most Americans, they then struggled to subsist on their farm during the Great Depression.

Perhaps it was these calamities that prompted Ingalls to say, “We still have frontiers in our old, settled states where the joys of more primitive days may be experienced with some of their hardships and, now and then, a touch of their grim humor.”  The “grim humor” of the simple, or primitive, life, was never lost on Laura.  She recalled, for example, the winter of 1880-81, when the new town of De Smet was completely blocked off from the world from December to May “by the fearful blizzard that piled snow forty feet deep on the railroad tracks.”  (This would become the focus of one of her Little House books, simply titled The Long Winter.)  During that blizzard, Laura would write, farmers learned to grind wheat in coffee mills to make bread, and because of that “healthful food” and the “generous supply of fresh air,” no one in the community got sick all winter.  As you can see, Laura had a good grasp of irony, possibly from such tough experiences from such an early age: “There is something in living close to the great elemental forces of nature that causes people to rise above small annoyances and discomforts.”

The very title, Little House on the Prairie, originally the name of a single book and eventually the name of the series of books and the TV programs, is redolent of that by-gone era that some of us look back on as the time of our grandparents or great-grandparents. There’s something safe and satisfying in the notion that within that little house, family cohesion was sustained, and life, though simple and often difficult, would go on.  Within the concept is the deeper meaning of homesteading: risk and change, steadied by determination, leading to stability and rootedness.

In the TV series, which is of course still available for viewing in various formats, the fictionalized Ingalls family (Laura, her three sisters, and her parents) live on a homestead in Minnesota.  Melissa Gilbert played Laura, Karen Grassie her mother, and Michael Landon was Charles, her father.  Landon had made a name for himself at that point as Little Joe in the earlier Western-themed series, Bonanza.  His fame was undoubtedly the big draw for audiences of the time.  And according to Wikipedia, Landon recycled episodes from Bonanza for Little House.

In an earlier entertainment epoch, movies and early TV celebrated the cowboy as the great American hero.  Movies featuring made-up ropers and riders like Roy Rogers, the Lone Ranger, and Hopalong Cassidy were immensely popular in local theaters and later on television.  The cowboy phenomenon was not solely aimed at children.  Lots of adults had memories of the days when the West was still being settled, well into the twentieth century, and buckaroos, marshals, and the bad guys they fought were part of the American fabric.

With the Little House series, the frontier of media imagination got a little Wilder (sorry, I just had to say that!)… actually, it became more complex, more nuanced.  The series depicted the tough life behind the scenes, the houses the cowboys rode out from, the daily lives of the people they protected on little farms and cabins dotted across the vast landscape.  I suspect that this more sophisticated, less “shoot’em up” version of the West evolved because Little House gave us the frontier seen through a woman’s eyes.

Still, the TV adaptation is just “loosely based” on the books.  The shows were filmed at a ranch in California, or in the Paramount studios.  There aren’t any tall mountains in southern Minnesota, though these do appear on the exterior shots in the TV show.  The “little house” of boards and a few windows used for the show was burned to the ground after the series ended.

To give some idea of how the TV series sliced and diced Laura’s books, the survival of the aforementioned “long winter” comprises only one TV episode.  Laura, in the books and in the TV series, grows up.  This would had to have happened anyway since the series was immediately and perennially popular and lasted ten years.  Melissa Gilbert, who was already friendly with Landon by association with his daughter, won the role of Laura when she was 11.  The show faded by 1983 but lots of spin-offs and mini-series followed.

The real Laura, who would probably have known about television before she passed away in 1957 but probably could not have imagined the enormous grip it would come to have on American consciousness, always intended to create realistic, autobiographical material.  Family, farm, and home were always her dearest subjects.  She chronicled her life through her numerous books, but particularly in her later work, begun when she was in her 60s, called Pioneer Girl, which includes her courtship with Almanzo, her relationship with her father, and other adult themes.

In her newspaper column, she focused on the factual current events in her Missouri community and in the U.S., before “feminism” existed as a name and concept, she was especially impressed with the greater freedom her daughter, Rose Wilder Lane, enjoyed.  Looking around her, Laura saw that times were changing now for women.

In a 1914 article, she decried the lack of beauty parlors for women even though every town had at least one barber shop: “Oh yes, the barber shop is a man’s beauty parlor!  They have things put on their hair to prevent its falling out and to make it grow; they have soothing lotions and astringents and powder put on their faces.”  Lacking a beauty parlor (a term I still use, as I learned it from my mother), Laura gave simple suggestions for women to improve their appearance: “Washing in buttermilk will whiten the hands and face.  Fresh strawberries rubbed on the skin will bleach it, and rhubarb or tomatoes will remove stains from the fingers.”

Laura wrote in 1916 that “Missouri poultry and eggs… [are] practically all produced by women, as a sideline at that!”  In 1918, she wrote that there was no longer any such thing as an “old maid,” a derogatory designation that had been common when she was a child, because a woman now had more options—her marital status no longer served as her primary form of identification.

Writing during World War I, Laura pointed out that women had become “expert munitions makers” and “are running trains… doing the work in factories… they are clerks, jurors, representatives in Congress and farm help.”  She opined that after the war, women would want to hold on to their jobs, but reminds her reader that farm women had “stayed on the job, our job, during all the excitement.”

Here is one my favorite statements from Laura, made in an essay called “Farmers—Need More Wives?”: “No one seems to want to ‘work like a farmer,’ except the farmer’s wife.  Well!  Perhaps she does not exactly want to, but from the way she goes about it, no one would suspect that she did not.”

Laura praised men’s work, saying a farmer needed to be a blacksmith, carpenter, engineer, veterinarian, agriculturalist, etc; and she praised women on the homestead, who would also need a bundle of diverse skills—cook, baker, seamstress, laundrywoman, nurse, chambermaid… poultry keeper…” and expertise in dairy work, canning, pickling, and preserving.  And, of course, the skill to be “a smiling hostess.”

The two-volume collection called Writings to Young Women from Laura Ingalls Wilder perhaps gives the best picture of Laura as a mature person expressing her serious hopes and ideals, with occasional touches of humor.  These short pieces reveal a woman more humanist than religious, a great lover of nature: “Out in the meadow, I picked a wild sunflower, and as I looked into its golden heart, such a wave of homesickness swept over me that I almost wept.”

The great, wonderful movement we call homesteading, that has its roots in the earliest days of our country’s founding, makes room for many philosophies.  But I would venture to guess that nearly all of us who take that name, that role, to heart, would agree with Laura’s words, written in 1923, nearly twenty years before she completed her Little House stories:

“Because of their importance, we must not neglect our homes in the rapid changes of the present day.  For when tests of character come in later years, strength to the good will not come from modern improvements or amusements few may have enjoyed, but from the quiet moments and the ‘still small voices’ of the old home.”

Preparing for the Holiday Rush on Your Homestead
Sticky and in Your Face: Spiderwebs