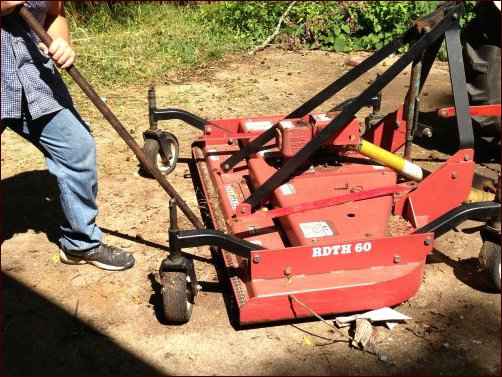 It’s certainly no secret that farm work frequently requires some heavy lifting, but what if you’re not too good at muscle-intensive manual labor?  Well, probably the best solution is to hire some big gorilla to do it for you, but that has its drawbacks, not the least of which is that you have to pay him, and bananas are more expensive than ever.

So instead, let’s investigate what weaklings such as you and I have been doing about conundrums like this since around the time that fire was invented.  Prehistoric man doesn’t have a very impressive record as an inventor of advanced technology, but he did come up with one helpful little app for the common stick that proved to be the Next (and continuing) Big Thing: the lever.

Being decidedly un-gorilla-ish myself, I’ve been using the lever for a long time.  In fact, I even have my own particular favorite.  It’s a 1-1/2-inch diameter hexagonal bar about five feet long.  It weighs about 20 pounds.  My father gave me this particular unit years ago, and told me that it had been made from the front axle of a Model T Ford.  Although I’ve never bothered to confirm this, I expect the hexagonal cross-section would make that fairly simple to confirm.  Both ends of my could-be axle have been sharpened, one to a dull point and the opposite end to a flat blade.

Like a lot of very simple things, the 20# Persuader is one of the most useful things I have on the place.  It’s extremely handy for lining up farm implements with the tractor you want to mount them to, as my protégé is doing in the photo above, but I’ve used it many times to lift heavy planting tubs off the ground, to make a quick cone-shaped hole in the ground to drive wooden fence posts into, and to move dead vehicles a few inches at a time.  It’s great as a forceful battering ram, or if you want a deep, precise hole in the ground with one swift movement, and it has no equal when you really need something very, very heavy to be moved aside.

You can easily make one of these for yourself, or at least you can get a blacksmith or welder to sharpen a long bar accordingly.  (Another alternative would be to wait for the Neil Shelton-autograph model to come out, but that project isn’t exactly on the fast track.)  After seeing how handy this one is, I’ve collected several of different lengths and with different points or heads.  Most of these I’ve found in farm sales and junkyards, just laying there unwanted.  One has a large mushroom head on one end good for pounding with a sledgehammer, another has a point like a pry-bar that can be used to work its way into small crannies that need widening.  There can be lots of variations.

Life without these levers was a lot more effort.

Chains I Love — Using Log Chains on the Homestead