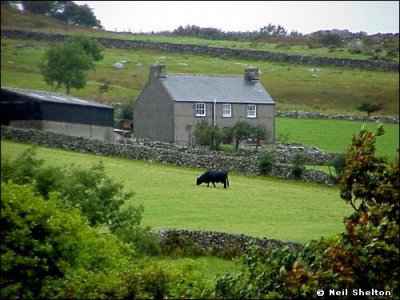 Some people swear by meditation; others tout the virtues of cutting up your credit cards, or joining a cult, but for me simplifying life is all about fence.

That’s because a fence is all about keeping the critters out of your garden, keeping the neighbor’s critters out of your critters, and keeping your critters off the highway. However, merely securing the food supply, staying on good terms with folks up the road, and avoiding lawsuits aren’t the only things that fencing can achieve for you. Fence can mark your property boundaries, and in certain instances even become your boundaries. Keeping these things in mind, you can see that fencing may well be the most important construction on your property.

Fence can also cost a lot of money, but it doesn’t have to. As a rule of thumb, the lower the cost, the more maintenance is required. If you have a small garden spot you want to protect, then you might not mind doing a bit of routine maintenance to keep the groundhogs out of the greens, but if you have a few hundred yards of livestock fencing adjoining a busy highway, animal, and even human lives, can depend on your ability to keep your animals off the roadway 24/7/365.

Of course, there are about as many kinds of fence as there are fencing materials. (We’ve even seen a fence made out of old bicycles.) However, I’ve put together a collection of some of the more significant styles of fencing that might be of interest to the small landowner. The first group is timeless and cheap and the second group keeps your livestock out of traffic about as securely as the current state of the art allows.

When you’re looking for ways to get by cheaply, there’s a lot to be said for looking at techniques that have been in use longer than money. Traditional fence methods make heavy use of the materials most readily at hand.

Arguably the first fencing material, stone endures in fences and walls, even if you have to replace a rock now and then. It’s easy to look at all the stone fences in Europe and New England and conclude that people these days simply don’t work as hard as they used to. That may be the case, or perhaps it’s just because stone fences can last for centuries, so there are a lot of them still around. At any rate, hard work notwithstanding, it’s a wonder to me that more landowners don’t build stone fences in places where rock is abundant.

Dry-masonry—the art of stone construction without mortar—has been practiced since before the time of the Great Pyramids. If you’ll just keep certain givens in mind, such as rain, ice, and frost-heave, you’ll find that you can, without gaining an excessive amount of education on the matter, construct rock walls that will contain sheep or cattle very well without great expense.

Although stone walls seem to be the epitome of immovable strength, they actually offer quite a bit of flexibility in that the shepherd or cattleman, rather than maintain some sort of movable gates, accesses the fields simply (or laboriously) by dismantling the wall where a gate is desired, moving the livestock from—say, the winter pasture to the summer pasture—then rebuilding the fence. When your life is measured in seasons rather than minutes, this would be a workable solution, but most applications require an easier/quicker gate than this.

Wattle fencing is a technique so old and so simple that it has evolved independently all over the world. Over 6,000 years old, wattle fence involves placing stakes in the ground and weaving smaller branches or slats between them. It is the basis of the construction method called wattle and daub, which sounds like a Hobbit law-firm, but is actually wattle fencing covered with mud—concrete, morter, stucco, or whatever.

Wattle fence is basket-weaving in a single plane; it’s particularly handy for containing smaller animals, especially in dryer climates where the upright posts are less likely to rot in a season or two.

If you have lots of brush on your property, and a few crude tools, you can make wattle fencing for little or no cost. You’ll want to use green wood from flexible species like willow, bamboo, chestnut, or hazel for your wattle.

Split-rail is the fence of early America. Long-lasting, flexible in design, and effective, once you’ve done the seriously hard work of splitting the rails, you’ll have an enduring, low-maintenance fence that can be moved about according to your whims.

Rails are split from durable, straight-grained woods such as white oak or hickory. Unlike most of the photos you may have seen, log-splitting is not done with an ax, but with a splitting maul and steel wedges.

The rails are then arranged in a zig-zag pattern with a flat stone placed under each corner. Split-rail fencing has been used to contain all sorts of livestock, even boisterous, destructive, large hogs.

Traditional fencing is certainly unparalleled for low cost, but sometimes cost needs to take second place behind security, as, for example, when your pasture fronts on a busy highway. Not only are you at risk of losing your livestock, but stray animals on the roadway can easily cause an accident, placing you in considerable legal liability. Here are three types of modern fencing that can come as close to worry-free containment as you can probably hope for.

It’s hard to beat a solar electric fence as a way to secure a small area. Theoretically, it needn’t be that small, as a single charger can electrify several miles of fence line. However, since the landowner needs to keep the fence from being shorted-out by weeds or fallen limbs, there is a practical limit to what can be maintained. Of course, how much maintenance is required depends on, among other things, how high off the ground the bottom wire will be. If used to keep livestock in, it doesn’t need to be that low, but if your fence is designed to keep small animals out—of the garden for example—it needs to be only two or three inches from the ground, so running a string-trimmer under the bottom line needs to be done every three or four days. A less-environmentally friendly technique would be to spray herbicide on the grass growing under the wires.

Using a solar fence charger and reusable t-posts means you can locate your fence as far from the house as you want since it makes its own electricity. I’ve had very good luck protecting my garden with three lines of hot wire: first, one about three inches off the ground, or the height of a groundhog’s nose; then another line at about eight inches off the ground, in case the ground-hog, or a rabbit, or squirrel, decide to jump the first line (although it’s true that after one bite from the fence, most critters get and stay far away from the area). Above that, around four feet from the ground, the third wire is about the height of a whitetail deer’s nose. The reason I “aim” for the nose is that the typical animal will first spy the white line of electric tape. His curiosity aroused, then he immediately moves in to investigate, which he first does by touching his nose to the hot tape. When a grown deer touches the tape, he’ll be out of sight and still running only a millisecond later, and most animals won’t be back to test the line again for a long while.

In days gone by, before electrical poly-tape was invented, steel wire was used. Wire works well enough at doing its job, but the poly-tape, besides being much easier to work with, is much more visible both to animals and humans, which is a definite benefit to both.

In case you’re wondering, electric fences are not harmful to animals as some city folks seem to think. If you want a good demonstration of this, simply grab hold of the hot wire/poly-tape yourself. You’ll find that this action will provide you with an indelible memory of your experience, yet you won’t be permanently harmed or altered in any way (other than perhaps deciding to stop taking my advice). Since the electricity comes in pulses, you’ll be able to let it go (and quite rapidly) which is another safety feature.

Once you’ve enjoyed all the direct current you need to come to this conclusion, you can test your fence in the future by pulling a blade of grass and holding it to the line. If everything is connected properly, you’ll feel a slight tingle, but not really a shock.

Here’s a fence design that will contain everything from a (reasonably good-natured) 2,000-lb. bull to baby lambs. The photo below shows one strand of barbed-wire over a 48” woven-wire, but this strong framework will support any sort of wire fencing, and will last for the rest of your life in most conditions. The posts, in this case 5” steel pipe and t-posts, are driven into the ground and braces and caps are welded in place.

After the wire is stretched taut with winches or hydraulics, this results in a very strong fence.

In the past, cattle fences were made with wooden posts and fewer lines of barbed-wire. Some old fences only consisted of two strands of wire, but those were simpler times when a stray animal wasn’t that much cause for concern, and local laws tended to support free range. These days, five lines of barbed-wire is the rule for cattle fence, and six lines and up are used more and more.

Some animals are just naturally hard to fence in, particularly goats who are curious, smart, dexterous, and quite a pain when they learn the weakest points in a fence. But there’s a solution: here’s a photo of a fence that’s designed to hold in both cattle and goats. Goats are a particular problem because their tendency to climb things breaks down woven wire, so if this use of 11 strands of barbed-wire seems pricey, it is less so compared with the welded-wire fence that goats would normally require. Notice the use of rigid hog-panel to keep the goats from climbing over the stone cairn.

Of course, there are lots more types of fence. Many types are suggested by readily available materials; in the American west, where the stone is such that it’s possible, they make fence posts for barbed-wire out of long shards of the native rock. Then there are the living fences fashioned from dense, thorny growing plants like hedge-apple (Maclura pomifera) that can be maintained for generations. Whatever style or type you choose, will be a major improvement to your property, and you’ll sleep easier at night.