Shelter from the Machine: Homesteaders in the Age of Capitalism by Jason G. Strange – A Review

Home /Book Reviews/Shelter from the Machine: Homesteaders in the Age of Capitalism by Jason G. Strange – A Review 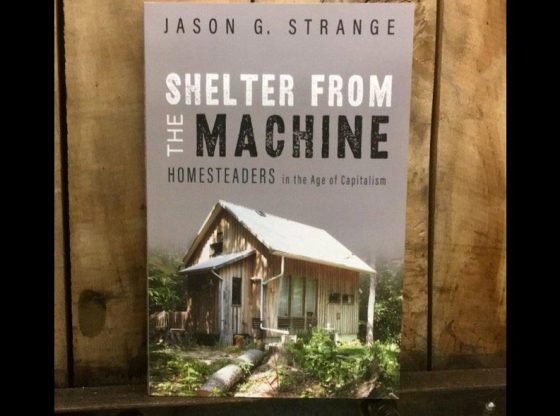 Seen within, and from, a broader perspective, modern homesteaders have much in common, even when they come from different backgrounds. Berea College professor, Dr. Jason G. Strange, explores big questions through his contact with a sampling of Appalachian homesteaders, both the locals and the newly arrived outsiders (whom he sometimes, kindly, refers to as hicks and hippies), in his book Shelter from the Machine: Homesteaders in the Age of Capitalism.

The area Strange has honed in on is the (real, but fictionally titled) region of Bear Lick, Kentucky. He has made a several-year study of this piece of Appalachia and its rugged band of non-conforming farmers, gardeners, and off-the-gridders.

Kentucky is a place that had the imprimatur of Daniel Boone, who imagined the meadows of Kanta-ke as an earthly paradise, open and unoccupied, a haven from the quickly crowding eastern states. But it was not as pristine as Boone imagined it. It had been visited by the Spanish explorer Desoto, whose cohort undoubtedly carried the organisms that would bring new plant life to the meadow while imparting death by disease for its Native American inhabitants. This difference in Boone’s impression and the reality is one of the first of many contrasts examined by Jason Strange in his far-reaching look at those who choose to go “back to the land.” Perhaps inspired by Boone’s vision, a variety of moderns have selected the territory in Eastern Kentucky as a place to subsist, retreat, and live out their ethos.

Some of Bear Lick’s denizens are early arrivals, children of older generations that simply lived in the harsh hills because their people been there for generations. Others—mostly children of the 1960s—came in search of the simple life, the ideal of self-sufficiency, and connection to nature. Both groups have a common vision, too. Both live like peasants in an age when most Americans slavishly crave the latest tech toys and live in crowded cities in search of the almighty dollar to buy them with.

Strange’s book begins with a neighborly pig roast hosted by Nathan, a man living off the grid, who was born in a blizzard, carried on horseback as a baby, and learned to garden, make rocking chairs and forage for wild herbs as a child. Next, the author takes part in a house-raising party hosted by Virginia, a woman who, though a skilled gardener who eschews many conveniences that most of us take for granted, still has included in her homestead some photovoltaic panels that allow her to run a laptop, some lights, and a potter’s wheel. Throughout the book, he returns from time to time to recall both these events, using the occasion and the participants as examples of the many points he seeks to emphasize: social, creative, pragmatic, communal, and spiritual. Nathan, for example, plows in rows and might use a bit of weed killer if absolutely necessary, while Virginia plants randomly and covers everything with mulch. But… both of them raise chickens.

Strange picks apart the principles of capitalism and the industrial age that have driven some apparently sensible people to the homesteading alternative in Eastern Kentucky. He describes his stint in a factory where many locals choose to earn a minimal wage through hard, boring, repetitious tasks. This leads to the conclusion that the back roads and wooded hills of Bear Lick provide, for its voluntary population of homesteaders, a “shelter from the machine.” Though some homesteaders do work from home, the more they can provide for themselves, the less they must live in dread of domination by corporations, which some of Bear Lick’s residents regard as akin to Satan himself.

Dr. Jason G. Strange is the Chair of the Department of Peace and Social Justice Studies at Berea College, the first non-segregated, coeducational college in the South, founded on abolitionist principles. It is still unique, and remarkable, for offering free, four-year education. As a dedicated teacher with degrees in Biology and Geography, Strange was voted “Funniest Professor” by Berea College students in 2014. With regular contact among students from varying economic strata, he is well qualified to compare, in depth, the schooling of the poor to that of the affluent.

He is diligent in pointing out that many unschooled, or lesser-educated, people may read more, and speak more articulately, than their better-schooled fellow Americans, citing what he calls “practical intellectualism”—the ability to apply knowledge rather than simply read and regurgitate information from books. One of his Bear Lick buddies, Cody, still gets mad when he remembers correcting a teacher in his rural school when she said that airplanes fly only to eight thousand feet. Cody had just been on one and the pilot said they were flying at thirty-two thousand. For trying to set his teacher straight on the facts, he was paddled by the principal. This can be seen in contrast to many of the Whole Earth Catalog set, who were sent to the best academies and may have advanced degrees. Yet they learned about living a simple life from the accounts of others—like Wendell Berry and Helen Nearing, who did it and wrote about it—and fell into that lifestyle, took up the homesteading banner, with as much dedication as Cody and other locals.

Shelter from the Machine also takes a hard look at social mores and how, or if, they affect the rationale for homesteading. As is well known, many proponents of self-sufficiency come to that belief through religion: Mennonites, Amish, Quakers. More evangelical faiths have an embedded disdain for the things of this world that makes it easy for folks like Nathan to live in an electricity-less cabin, and for one of his friends to conclude that crude oil is the veritable Beast of the Apocalypse by which we are all infested.

On the other tip of the spectrum, one of Jason Strange’s Bear Creek contacts is a lesbian; is there any connection between the fact that Kentucky passed laws as early as 1973 (since overturned) preventing or forbidding same-sex marriage and her wish to find a peaceful retreat in the backwoods?

Another of the thorny ironies that Strange pulls out is that while the “bohemian” crowd is preparing for a physical collapse brought on by “ecological dislocation,” their devout, traditionalist neighbors are awaiting the “rapturous moment” when Christ returns in glory. Yet Strange sees this issue as another that, paradoxically, seems to bind these two groups—the fundamentalist and the secular or spiritually eclectic—together. Because of their convictions, both are dedicated to the notion of the End Times: the apocalypse, global warming, pandemic, or some version of worldwide politico/governmental catastrophe as predicted and promulgated by scientists, philosophical pundits, and Bible scholars alike. Both groups see themselves as living a kind of constant protest against “the way things are” in factories, government, agribusiness, schools, television, the internet, despoiled wildernesses, blighted cities, and even some churches.

Professor Jason Strange takes a hard look at capitalism, as the title implies, since that system is very often the inimical force providing the motivation for an individual or familial return to Edenic settings like Bear Lick. Capitalism makes good things happen, no doubt. People are pleased to buy cheaper goods or more expensive ones of presumed higher quality. But the capitalist system often operates on the basis of underpaying the worker and undercutting the competition, so people are its victims, too. Strange suggests that even those residents of Bear Lick who depend on “real” jobs are also being shielded from the worst abuses of the system by openly and avidly embracing non-capitalist work, and with it, a vital, if unstated, kind of collective, or some would say Christian, model: sharing without profit, giving back to, and receiving from, one’s neighbors and one’s environment.

All of the aforementioned contrasts and comparisons are examined in notable and scholarly detail by professor Jason Strange, even as he maintains an attraction to, and emphasis on, the warmth of the real people of Bear Lick, people whom he has investigated and interviewed, and with whom he has worked, partied, and communed. His book has many moments of humor and presents a rich array of folk wisdom imparted by real folk.

In both groups—whether one calls them hicks or home people; hippies or nonconformists—Strange finds certain significant similarities. Less protected from and more open to the vagaries of Mother Nature, all must face each day with a willingness to, as my mother used to say, “make do with what have.” Strange concludes with the quiet suggestion that perhaps the important common factor among them is an unspoken wish to live “without a chief.”