So, You Want to Live Off Grid, Eh? 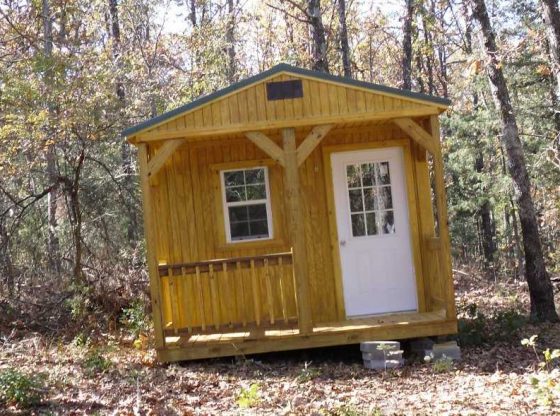 Today’s hottest trend is off-grid living; unplug, disconnect, and get back to your pioneer roots.  Bookstores are full of books on every conceivable aspect from “Homesteading 101” to “Off Grid for Dummies”.  Magazine articles abound and the TV shows… well, you get the picture.  It all sounds so great.  Hard, challenging work, but ideally romantic. 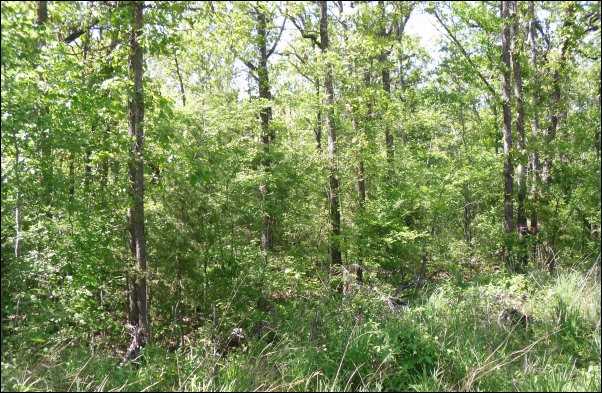 I would like to share my off the grid adventure.  Several years back, Hubby and I purchased a lovely three-acre tract of land in the Ozark Mountains.  Secluded, beautiful trees, and a seasonal creek.  After a year of visiting our “Eden” every two to three months, we decided to put up a cabin.  Since we live twelve hours away and our schedules only allowed brief visits of about a week at a time, we thought it best to purchase a prebuilt cabin.  You know, one of those portable ones you see on every corner.  I’m in love with the tiny house movement, and I was able to convince Hubby that 192 square feet would be just fine for us.

Delivery day was exciting!  November 1st, our cabin had arrived.  Normally we would rent a motel room on our Ozark getaways, but now we had our own cozy cabin.  We didn’t have electricity, water, or sewer but it didn’t matter.  Our ultimate plan was to live off grid anyway. 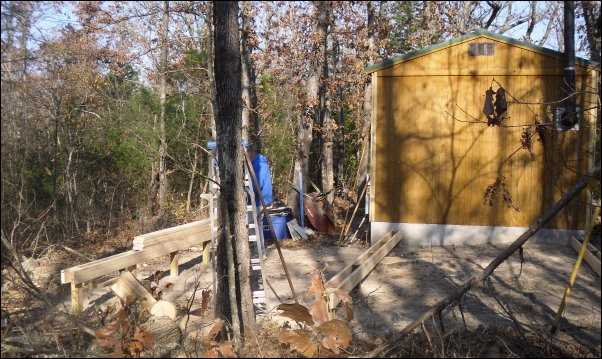 Night one could be compared to trying to sleep in a walk-in freezer.  It was nine degrees!  Yep, nine.  Our cabin had no insulation or heat.  It was just a shell.  Thank goodness for lots of blankets and body heat.    The projected low for the second night was zero.  We rented a motel room.  That 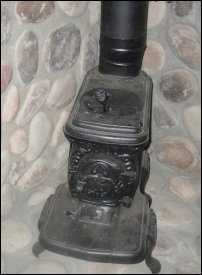 experience convinced us that if we were to visit anytime from late fall to early spring insulation and a heat source had to be our first- priority.

Over the next two years, we came up as often as we could.  We insulated, wired, sheetrocked, painted, put up light fixtures, and most importantly Hubby installed a woodstove.  Cooking was via an old propane RV range.  It was really becoming our cozy cabin in the woods.  During this time, we also planted fruit trees and cleared for the garden area and chicken coop.  With the purchase of a generator, we were able to have lights other than propane lanterns and watch the occasional DVD.

The area residents, for the most part, were friendly and helpful, allowing us to fill our water jugs from their wells and offering helpful advice.  After every trip to the cabin, we would immediately begin to plan a return trip.

Then in the fall of 2016, an opportunity arose that was just too good to pass up.  A job became available in a town close to our cabin that was perfect for me.  But,”What of Hubby?”, you might ask.  After thirty-five years of self- employment he decided that he would semi-retire.  His varied construction experience would enable him to do the odd job here and there.  Family and friends were incredulous.  No one could believe we would be living without electricity, running water or indoor plumbing.  However, we were confident.  It’s not like we’ve lived pampered, privileged lives. We were accustomed to hard work and a certain amount of hardship.  Life’s challenges only served to make us stronger.   We were ready!

Fall in the Ozark Mountains is breathtaking.  Crisp, cool mornings, the brilliant reds and golds of changing leaves, and cool evenings perfect for a fire in our outdoor firepit.  The job was wonderful, the weather was wonderful, and Hubby was finding plenty to do around the homestead.  Of course, we missed our family, but we weren’t so far away that we couldn’t visit.   Getting ready for work each morning was an adventure.  I’m not really what you would call a “morning person”, so getting up at four thirty to heat water on a propane stove to bathe was a bit daunting.  However, applying makeup and doing my hair by lantern light was an even bigger challenge.  I managed, and it soon became routine. 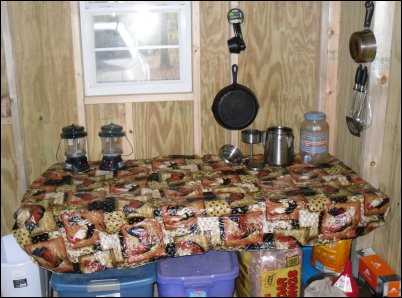 Two weeks passed, and the weather started to change.  It was getting colder, but the cabin was warm and cozy.  A little too cozy at times.  This was the longest we had ever stayed in our tiny 192-square-foot home, and living full-time was a little different than visiting.  It required more stuff.  In order to solve that dilemma Hubby decided to add an extra 190 square feet.  We would have a bedroom, bathroom, and closet eventually.

The weeks passed.  The rains came, the snow came, the ice came.  We hauled water for drinking, cleaning, and bathing.  Laundry was a weekly chore at the local laundromat.  Wood had to be chopped for heating and some of the cooking.  Perishable foods were kept in an ice chest on the front porch; no need to buy ice at that time of year.  All this paled in comparison to trekking out to the outhouse in wet, freezing weather.   Progress on our homestead had come to a halt, and we were starting to get on each other’s nerves. 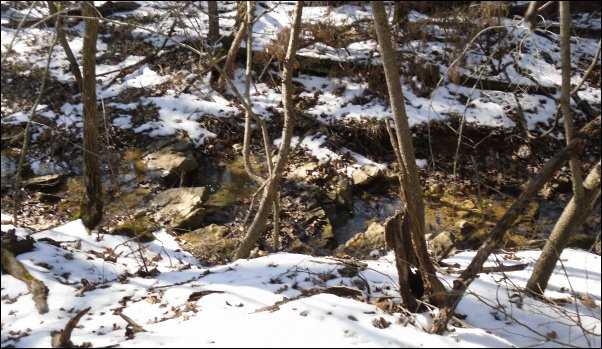 Christmas was just around the corner, so we decided to go home for a visit.  It was amazing!  Seeing our family was great, and the modern conveniences!  Looking back, I can see it was that trip home that was our undoing.  After two weeks of showering and indoor plumbing, we would be hard-pressed to return to our off-grid world.  Return we did, and even managed another four months but the romance had gone out of our adventure.

In early spring we packed up and moved back to the world of flush toilets and lights that come on with a flick of a switch.  Do I feel like we failed?  No, we learned a great deal about ourselves and each other.  We also learned not to believe everything you see on television.  We’re keeping our little homestead and will go back for the occasional visit for now.  That’s right, Hubby and I are regrouping and planning our next campaign.  We’ll try again only next time we will be armed with knowledge and realistic expectations.