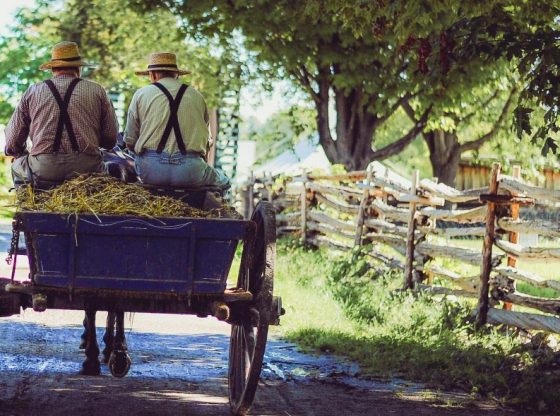 A thoughtful young person in 2019 might ask, “What did people do before they had… [fill in the blank: cellphones, computers, netbooks, smart watches]…” And a grumpy old person might answer, “Well you wouldn’t understand. Life was slower and simpler in… [fill in the blank: 1955, 1980, 2001]…..”

As someone who can remember what it was like to make phone calls with four numbers, before prefixes and area codes, I could be one of those grumpy oldsters. But, like many an oldster, I have had the curiosity to see what life was like way before my time. A lot of homesteaders also have this curiosity. They live in cabins, grow their own food, raise chickens for eggs, and keep a cow for milk, and…have a cellphone hidden away….purely for emergencies, of course.

But looking at life from the point of view of devices is to miss the big picture, like looking for a certain brush stroke in a painting by Rembrandt or Wyeth. The real question—what did we used to do?—is not answered by a negative like “we didn’t have phones” or “we didn’t watch TV.” It’s answered by positives, important positives.

Recently I came across a book that seems to hold a lot of positive, accessible, doable answers to what we did, and what we can still do, when we leave our devices in the drawer for a while. The book—How to Do Things—is a reprint of a book first published in 1919—yes, 100 years ago—a time when about 50 percent of Americans lived in rural areas, when “the grid” was unavailable, and even telephones, though invented and in use, were a rarity in private homes, with small communities perhaps having one or two to share. The “candlestick” telephone often portrayed in vintage movies was invented in 1919. 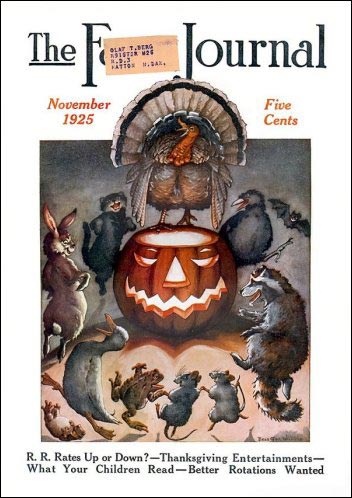 How to Do Things was a collection of short articles gathered by the national magazine, Farm Journal, which began publication in 1877 and is still in business today. The Journal was doubtless an exciting addition to life on a remote farm, bringing its readers in touch with other people, ideas and even moneymaking prospects. HTDT was the brainchild of a Pennsylvania Quaker farmer and journalist, Wilmer Atkinson; the newly minted edition, subtitled “A Timeless Guide to a Simpler Life,” was edited by William Campbell. This description is offered on the book’s back cover:

“Written by farmers and craftsmen, with original text and illustrations from the 1919 first edition, this 100th-anniversary volume presents a new generation with expert guidance on every facet of homesteading.”

HTDT jumps right in with what might have been thought of as a rather more modern activity, “Mailing Lists That Make Money.” For instance, we are told of a farmer who, “using a typewriter”, contacted seed sellers with an offer on his seed corn. Another such agro-entrepreneur made a catalog of his hickory nut crop, thus creating a “parcel-post trade.” Parallels to internet enterprise will not be missed, I am sure, by some of our more ambitious readers, and may remind us that “things to do” can become “ways to make money” as you have often noted in the articles on Homestead.org.

There are innumerable tips in HTDT regarding animal husbandry (funny word, hmm?): these include making a mask for your hog to keep him from eating your chicks. There is a guide for figuring what creatures are killing your chickens and how to deal with them, whether it be skunk, weasel or fox: dig your chicken house foundations underground, surround it with a stone wall, and keep a good guard dog on patrol. Another way to keep avian pests away: tie your cat (gently) to a run near your berry patch to ward off the birds that thrive on berries. (I like this idea after two years of helplessly watching our succulent blackberries disappear in bird beaks. Now I just need to find a cat that my good guard dog will tolerate!) 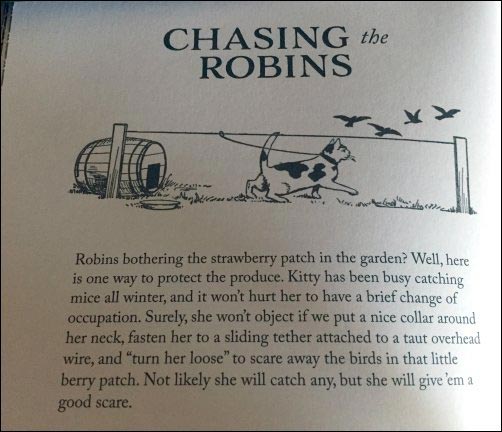 If you’re looking for some indoor activities, HTDT has plenty. There are instructions for canning and cheesemaking, and recipes for holiday sweetmeats, steamed bread, corn chowder, cream soups, Louisiana cornbread, a rather exotic sounding fish flake soufflé, and a specialty called Red Bunny, that simply combines butter, American cheese and tomatoes melted together and poured on toast (gonna try that one!).

Another pleasant, indoor autumn- or rainy-day thing to do is to make a window garden. Full instructions included. Interesting that farmers 100 years ago packed indoor plants in sphagnum moss, which was deemed both useful in retaining water around the plants but also attractive—nowadays we may use colored mulch but the principle is the same.

Our forebears of the last century, lacking insulation, used their “spare” time to fill the space between inner and outer walls with—newspaper. Newspaper was also used for shading plants.

HTDT, some of its contributions written as it was by amateurs in the writing field but doers in the real fields, can be both conversational and amusing, as in one segment about “Planning the Porch” in which a husband and wife “discuss” how to build that important add-on, covering everything from dimensions to breeze-catching (the man wins this one).

Of course, farm children are rarely idle, and our forebears learned from an early age how to cook, sew, clean, “whip rugs” and even “tinker up things now and then.”

But when all the work was done, there were other things to do in 1919. Parties were encouraged and indoor games were popular. HTDT includes many such parlor favorites. One was very simply a smiling contest—the one who can smile the longest is the winner. The opposite was “The Continuous Glum” in which the audience dares the participants not to laugh while making funny faces and telling jokes to force someone to lose. The intellect is tickled with the “Game of Telegrams” in which ten letters chosen at random and players are challenged to make a (preferably silly) sentence in which each letter is the start of a word. The example given is A L P O C R G D E H with the possible answer: “All ladies passing our car receive good dinners eaten hot.” 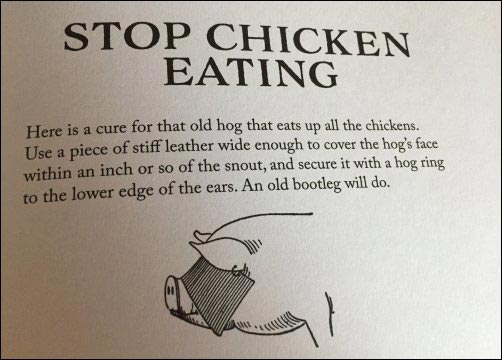 A game that showed up in carnivals was apparently “invented” at home: throwing a ball into a basket. In the carnival, the basket was rigged to bounce the ball back out, but our grandparents undoubtedly played this simply to reward the prowess of those with a good pitching arm. I like the “standing high jump” in which contestants jump for a donut hanging in a doorway. A similar challenge involves eating buns hanging on a gently swaying clothesline—with your hands behind your back. Potato peeling and carving contests were popular, along with a race accomplished while holding a large potato in one hand with a sewing pin (I recall a version of this from my 1950s childhood, holding potatoes in a spoon). There are games, pantomime, and mind-reading. All of these games and party plans would have given your parents, grandparents or greats some things to do, and all would probably be fun to try—if you can put down that device for a while!

Since autos were in use, though, like phones, a relative rarity in 1919, there are a few automotive tips for Farm Journal/HTDT readers. The difference in today’s auto emergencies can be readily grasped in the section on how to make a small fire, with sand and gasoline, to illuminate the work of changing a tire (or repairing a punctured one) at night—nope, no headlights. Another fire-lit farm invention is a barrel for boiling water. It features an iron pipe stuck in the barrel’s bottom, with a plug on the outside end. The pipe is heated with a kindling fire and “you’ll have scalding water in about 30 minutes.” 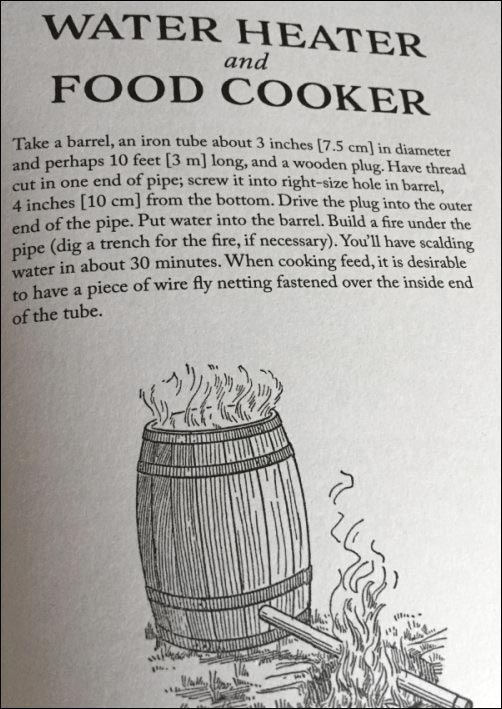 Electricity is mentioned once in HTDT, its virtues extolled as “The New Farm Helper.” Electricity can save on the cost of labor, and save energy on household chores like churning, chopping, watering, pumping, and running machines like an automatic milker. HTDT offers the notion that “we are going to witness—are witnessing—the introduction of this modern force at a rate that foretells great and helpful changes…..” Can—will—the same be said of our internet-driven devices? Well, yes, of course.  We cherish our microwaves, our egg sorters, and our tractors operated by remote control. Like electricity, like the auto, these marvelous new inventions give us more time to…..

…fill in the blank!