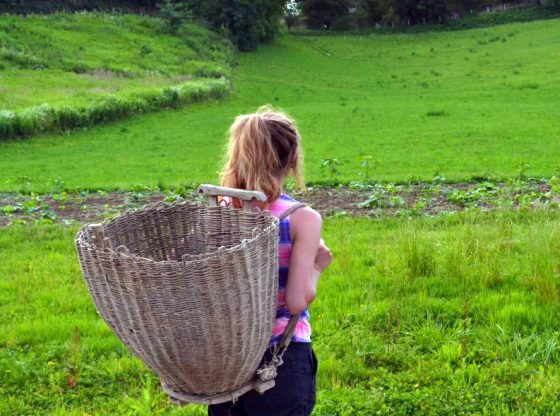 I love the idea of living on a homestead. When my husband and I were looking to purchase our first home, it didn’t even occur to us to look for a house in the city, or even in a small town. We knew we wanted to be in the country. I knew I wanted to be in the country. Yes, I absolutely love the idea of living the homesteading life. I have found though, that there is sometimes some discrepancy between the idea of it and the reality. Let’s face it, homesteading life is wonderful, but it can be messy, smelly, and a lot of hard work.

My dear husband, I would say, loves everything about homesteading life. He spends hours researching ways to simplify things, ways to make things better, new ideas to implement, new animals we could introduce to our farm, new plants to grow, how to make them grow better… You get the idea. When he enthusiastically shares his ideas with me though, I must confess I don’t always receive them with the same enthusiasm with which they are shared.

Like when he read a book about human manure and turned to me asking what I thought of him building a composting toilet to put in our bathroom. What?! You want me to poop in a 5-gallon pail and then cover it with sawdust and then just leave it there! Until the bucket is full!? This was not an idea that I immediately embraced. I was very hesitant! Wouldn’t it stink? What would our friends say when they came over to visit? Would they even want to come to our house if they found out we had this thing?

This just seemed too extreme. I mean, we had indoor plumbing. It’s not like we were building a house and this would be the simplest and most economical way of doing things. Temporarily. No, that was not the case. Why? Why would you want to do this? Since he had just read The Humanure Handbook on how we literally flush away all of this valuable composting material, he was full of answers as to “why” we should try this. And he assured me that he would be the one to empty and clean the pail. He was so enthusiastic about giving it a try… well, I finally conceded. We would try the composting toilet. For a time… as an experiment. But if it smelled bad, he needed to get rid of it immediately! And he WOULD be the one to empty and clean the thing; I was not going to touch it.

The Hesitant Homesteader Gets a Composting Toilet… Really.

So, Dear Husband set about building a simple wooden box from some re-purposed plywood. The top lid was on hinges and had a hole cut in it. He found an old toilet seat and attached it over the hole (for comfort). Then he placed a 5-gallon pail inside the box and sprinkled some wood shavings in it. Next to the “toilet”, he placed a second pail that was filled with wood shavings and a scoop. After a person used the “toilet” they were to sprinkle a scoop of shavings over the top of it. We were all set. I was hesitant, but I would see how it worked.

I was actually quite surprised by it. It did not stink! The wood shavings seemed to neutralize the odor. The only real smell was that of the wood shavings themselves. One win for the hubby! Now, don’t get me wrong, I was not about to tear out our “regular” toilet to replace it with a composting toilet. But this thing had some merit. For one thing, it did not require running water to use it, which is certainly a bonus if the power goes out. And living in the country, that can happen. A lot. For extended periods of time. Having a toilet to use that does not require water was certainly a handy thing to have around.

I still had a tendency to be a hesitant homesteader though.

Like when we had an orphaned three-day-old kid (goat) that needed special care. “What do you mean?” I asked. “You want to bring a goat into the HOUSE!?” I’m all for caring for the needs of our animals, but in the barn, not the house! He patiently explained the need and benefits of caring for the tiny animal inside rather than outside. Yes, I was very hesitant. But, once again, I conceded.

So, down went the tarp in the empty room in the basement. Down went the newspapers over the tarp and the straw for a bed for the little one. I must say, it was easier to give the cute little kid the care she required in the warmth of our basement as opposed to the cold outdoors. And I did quickly become quite attached to the little orphan. We named her Jenny and she most definitely became a pet. Score two for the hubby.

I do love homesteading. I am enjoying the animals. I enjoy being able to produce our own food. I love working in the garden. And I am slowly learning to accept the messiness and work of it all. I have given up on the thought of keeping our entryway clean of mud, hay, and sawdust.

I clean it, but I am now resigned to the fact that it will be dirty again in five minutes, cluttered with barn coats, boots, hats, and mittens. I’m resigned to the fact that when Dear Husband takes off his boots after cutting down a tree (one of his homestead hustles is selling firewood) that sawdust will spill out of his boots and will be clinging to his socks. The socks now go into a bin and when the bin is full, I will curl up on the couch, put on a movie and pick sawdust out of all of his socks. (That stuff does not come out in the wash unless you pick it out.)

Yes, country life is messy. But I know I wouldn’t willingly trade it for anything. I may be hesitant, but I am most definitely a homesteader.

Trials and Travails of a New Homesteader

Why I’m a Homesteader (The Secrets of Homesteading)