"> We're Being Mugged by Mother Nature - Raccoon Wrath at Homestead.org

We’re Being Mugged by Mother Nature

One of the biggest reasons I enjoy living out in the woods is the wildlife.

Not that wild life.  That life gets decidedly less wild with each passing year, and incidentally, it wasn’t all that wild out in the woods to begin with.  (Anything else you may have heard is a vicious lie.)

No, I’m talking about all the fuzzy little woodland creatures that make up our neighborhood.

In the wild, however, animals retain their dignity and beauty.  There are few things any more beautiful in my mind than a whitetail deer in motion; flying through the forest and sailing over fences and streams in a few effortless bounds.  Watching the animals in their native element; watching them carry on their lives, independent of the human race, has been a lifelong fascination for me.

A few years ago Olga and I determined that our lives would be a lot simpler and more elegant without any pets.

I remember this great cartoon I saw in the New Yorker years ago.  In it, an extremely well-heeled couple is sitting in a spotless and elaborate living room, replete with crystal chandeliers, golden candelabras, and classical art, but there are several old hound dogs laying around on the floor and furniture.

The woman is saying, “Somehow, life was more genteel before the dogs…”

Anyway, that would neatly define my former philosophy of pets, so Olga and I determined that we’d prefer not to have any domesticated animals at all, and dogs, in particular, keep the wildlife at a distance.

That worked nicely for three or four years, but after a while, the word got around to all the fuzzy little woodland creatures, as well as all the other miserable little freeloaders within a five-mile radius, that a particularly soft target had been located, and they all decided to move into our attic.

You could hear them up there at all hours of the day and night, scampering back and forth looking for tasty electrical wiring to munch on.  The second time I woke up in the middle of the night to find my spouse trying to chase a flying squirrel out of our bedroom (I am not making this up) I decided it was time to take action.

My daughter gave us two cats.  They are Bengals, which appears to be a breed of unusually weird-headed felines that seem pretty similar to wild cats in that they are not particularly affectionate.

I count this as a plus because I am not particularly affectionate, either.

However, they are world-class hunters, whereas I am an English major.

Two completely identical brothers, our poor Bengals had to live indoors most of their time with my daughter, but here, they have the run of the farm, and they mostly fed themselves that first summer.

They were quite generous in their new wealth, as they frequently left us a share; such as a succulent chipmunk head, or perhaps a nice mouse torso, left in a prominent place on the doormat.

Since then, the mice, rats, pack-rats, chipmunks, flying squirrels, and squirrels have stayed back a respectful distance from our big bruiser cats.

Unfortunately, raccoons have absolutely no respect for anything, perhaps especially cats.

I’ve had a long and tumultuous history with raccoons starting from being bitten on the ankle by a rabid one when I was three.  (Yes, social mores were a lot less developed back then, and as I learned, wild animals just walked up and took a bite out of you, should they so desire.)  Of the many things that attack our garden, these wretched varmints are the only pests that are both smarter and more ambitious than I am.  This makes them a particular menace.

Sometimes Olga will leave a bag of trash out on the porch for me to take away.  On occasions when I have more pressing things on my mind, like always, I may forget to take it for a day or two.  That, I’ve learned, leads to cheerful mornings where I walk out onto the porch to find it strewn from one end to the other with coffee grounds, eggshells, and other things I’d rather not discuss.  Sometimes I hear laughter coming from the woods.

Lately, I’ve been telling O. how she’s been feeding the cats too much.  They’re getting sort of paunchy, and don’t clean up their food right away.

So I was startled, but not surprised, the other day when, coffee cup in hand, I headed out the door to relax in my rocker, and there, just inches from the same puny little ankle that was raccoondalized those many years ago, was a young raccoon, chowing down on the cat food.

The cats were sitting a safe distance away looking petulant.

Recovering my composure, I put my ankles back inside the threshold and yelled at him.  He just looked up at me with neither fear nor anger, but what I took as a certain pragmatism, as if to say, “Look, pal, I’m a raccoon, this is what we do for a living… See? Just give me few minutes here, and neither yer ankles, ner yer pussycats, are gonna get hurt.” 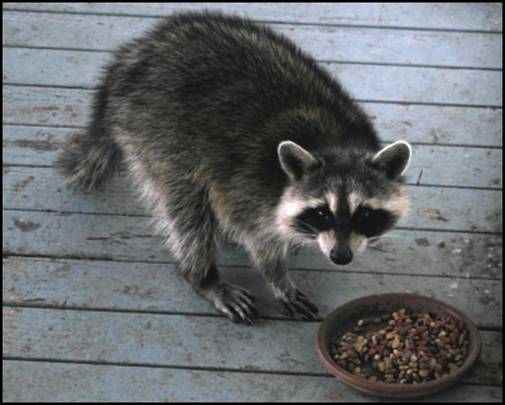 So I got a broom and ran him off the porch.

What am I going to do then, spend the rest of my afternoon guarding a half-eaten plate of cat food?  Well, I guess I could have taken the food inside, but of course, I didn’t do that, so when I walked past the French doors a while later, I could see the raccoon had, of course, returned and was, of course, eating the cat food.

So I walked out on the porch and really, really gave him a piece of my mind.

He looked up at me with this sad, tired look, clearly disappointed that I was going to behave this way.

I stamped my feet and started to yell even louder.

That’s when he took his surprisingly hand-like front paws, scooped up what cat food he could in his palms and, walking on his back legs, took it a few feet away, his back to me, hoping to avoid my wrath.

It was one of the most pathetic things ever I’ve ever seen, this raccoon walking dejectedly on his hind legs, stooped over with a few morsels of cat food in his hands.

I thought of Oliver Twist.  It occurred to me that a whole raccoon’s belly full of cat food probably wouldn’t cost more than a couple of cents.

I sat down in my chair and watched him.  He ate what he had, then he came back a little closer and started using his bony little fingers to get cat food out of the cracks in the floorboards where our sloppy, indulgent cats had let it spill out of their dishes.

Suddenly, our cats seemed like spoiled American teenagers, and the raccoon seemed like some starving Ethiopian child.

What are you gonna do?

So I came home the other day, just as the raccoon was leaving.

When I got up on the porch, I could see that he’d not quite cleaned up the dish.  Apparently, we’re now over-feeding the cats AND the raccoon.