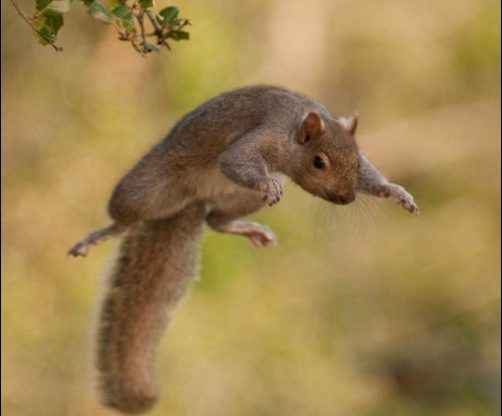 Unfortunately squirrels don’t scream when they fall, not the way people do, but I wish they would.  I say unfortunately because if they did scream, it would give a little warning that a squirrel was “incoming”, and you might then have a chance to take defensive action.   As it is they fall without a sound, stealth falling so to speak, and you don’t know they are “incoming” until after they land, and by then it is too late for a productive reaction.

Before moving out onto the river bank, I had not thought about squirrels falling out of trees.  They are, after all, the world’s foremost acrobats.  They jump from precarious perch to precarious perch continuously without a pause, without a hitch.  Until I moved onto the river bank, I had never seen or heard of falling squirrels.  On the river bank, we live under a spreading overhead canopy of pecan-tree limbs, reminiscent of a rain forest with a complete, lush canopy.  There isn’t a bare spot overhead on our entire place and there are so many squirrels that I don’t pay attention to them unless they do something unusual.

One of the unusual things about squirrels is how they thrive on teasing ground-bound animals.  Squirrels have a wicked and completely unmerciful sense of humor, sort of like the gremlins in that movie.  For instance, squirrels the world over will tease dogs for hours.  They quickly learn how fast a dog is, how high it can jump, and how much attention it is paying to them.  If the dog is tied up, the squirrel will figure out the precise limits of the dog’s restraint.  With that information they commence to pester a dog by getting close enough to entice the dog to take chase, while remaining inside their escape range.

I have seen squirrels jump over our Chihuahua instead of running from it.  Back and forth the Chihuahua will run at the squirrel, and the squirrel just jumped over it and watched it run by.  I have seen a squirrel do the same thing to my banty rooster.  Squirrels are infamous for climbing up a tree trunk, just high enough that the dog can’t reach it.  The squirrel will cling to the tree trunk facing down at the dog and make barking sounds, driving the dog crazy as it leaps at the squirrel that is just a fraction of an inch out of reach.

Then there are the bombardier squirrels that enjoy dropping pecans on people.  They climb around until they get right over a person, carefully aim, and then “bombs-away!” with a pecan they carried out there just for that purpose.  I have seen them do it and been hit, too.  A lot.  But I digress, this is supposed to be about falling squirrels, not pecans.

Not long after moving under the pecan canopy, I was walking across the yard when I heard a muffled “WHUMP” right behind me.  I spun around and there was a puff of dust about five feet away (this was in drought season) and a squirrel streaking from inside that small mushroom cloud of dust towards the nearest tree trunk.  Although I did not see the squirrel fall, and I certainly did not hear a thing until it hit the ground (screaming really would be handy), there was no doubt of what had happened.  I watched that squirrel for the next few minutes and it did not appear injured.  It went back about its business of leaping from flimsy limb-tip to flimsy limb-tip, as though nothing had happened.

At the time I thought it was amusing, although I did have the passing thought that if it had landed on me that I might have gotten a bruise and some scratches.  I figured that the squirrel must have missed its target branch up in the tree when it leaped.  I guess that they are not perfect acrobats after all, and sometimes make a miscalculation.  The law of averages seems to apply to leaping squirrels less than it does to leaping humans, but they still do apply.  So, I empirically learned that squirrels do fall and that it is not a rare occurrence.  Unusual yes, when you see it happen you are startled a bit, but not so rare that you can expect to go an excessively long time without seeing it happen—at least not where I live.

Some of this falling I attribute to my sister who lives next door.  Each year she takes in one or more orphaned baby squirrels, raises them to maturity, and then releases them.  This means that during their most formative years they are not leaping from tiny limb to tiny limb the way their wild cousins are doing.  Instead, they are inside watching TV and getting fat, kind of like today’s generation of kids.

My sister recognizes each squirrel that she raised because they stay around for the free handouts that she gives them.  I am sure that they watch the people below more closely than the completely wild squirrels do.  It is my theory that many of the falling squirrels fall as a result of being distracted by watching the human below and looking to see if a handout is in the offering… and the fact that they spent too much time watching TV in their youth.

Recently my brother came to visit.  He lives in California now and only gets to come out once a year, for about a week.  On his last visit, during Thanksgiving week, his luggage was lost and he arrived with only the clothes he was wearing—certainly enough for a week unless you are as finicky as he is.  He and I are somewhat in the same size range so he borrowed some of my clothes.  His favorite of my clothes were my denim bib overalls which are fairly loose on him, unfortunately.

My other theory on why squirrels fall has to do with breeding season.  During breeding season (around Thanksgiving week) a fertile female will be chased by a long line of anxious male suitors.  First in line behind her is the dominant male of the territory.  This dominant male will breed with her numerous times.  The breeding is a fast and furious action because the suitors are constantly trying to take his place by kicking his butt, and he doesn’t dare take more than a few seconds to complete each procreation mission.

Eventually the dominant male becomes exhausted –  gouged, scratched and bitten in many places from his continuous exertions on the procreation fields and the battlefields.  When he becomes too exhausted and injured to continue, he drops out and the next squirrel in line takes his place.  This continues until the female says enough and chases all of the males away.  She never has a problem chasing the male suitors away, not like the dominant male does.  When she says, “Enough!”—whoosh they are gone.

During this natural process there is a line of distracted male squirrels playing follow-the-female-leader leaping through the tree branches in rapid succession.  This is a situation designed to create falling, or “incoming” opportunities. This, I believe, has to be the explanation for this particular falling.

My brother and I were walking across the yard, under the pecan-tree canopy.  He was wearing the bib overalls that were a bit loose on him and was in front of me by about ten feet.   As we walked I saw a brown blur hit him on the back of his neck and disappear down the overalls, it happened so fast that I had a hard time believing I had seen it.  Immediately, my brother jumped straight up in the air and performed a singularly perfect pirouette—twice—before landing back down on his feet; levitation may have been involved.  During that marvelous aerial maneuver he also performed a complete and operatic rendition of every curse word and curse phrase I have ever heard, plus some new ones he must have learned in California.

Then the “spirit” dancing commenced; somehow he was able to twist his body so that his head was facing completely behind him, while beating the crap out of his back with flailing arms and fists.  He looked like rubber man twisted around like that. Not once during this brava performance did the string of obscenities pause or stutter.  Then he bent forward and over like a contortionist in Cirque De Soleil so that his head was once again facing rearwards at knee-level as he beat the crap out of the backs of his legs.  And still he missed not a beat with the creative cursing.

As he was beating on himself, I could see what appeared to be one lump separate into two lumps as it traveled down his back, inside of the overalls.  Upon reaching the branching of the legs, one lump went down his right leg and one down his left.  These bulges were moving quickly and mostly ahead of his flailing fists, although they each caught a few direct hits.  By the time these bulging lumps reached somewhere around his calf areas the cursing had metamorphosed into a single rising note that became increasingly louder.  It sounded a lot like a tornado warning siren.

Then, out of each pants’ leg, simultaneously popped a dazed and stunned looking squirrel which took off with lightning speed for the nearest tree.  It appears that either a mating pair of squirrels had lost purchase, or perhaps a fighting pair of males had lost purchase, and had fallen while still in each other’s grasp; onto my brother and down his overalls.

My brother recovered fairly quickly from this bizarre occurrence.  He stood there staring at me with an odd and puzzled look on his face.

It took me awhile to explain because I was having a hard time breathing, much less speaking, from my excessive (his opinion only) laughter.  He stared at me, where I was still writhing on the ground, with a rather bemused expression and quietly said, “That would explain it then”.  He also said that he thought he had been bitten and scratched over every square inch of his back, buttocks and the backs of his legs.

After I was finally able to quit laughing, and after he had finally quit hitting me with the stick, he did have one positive thing to say about it all.  He said, “I’m glad they didn’t fall down the front side of these overalls.”

It is kind of funny to see him walking around on a sunny day with an umbrella now.