Matilda Jackson: Making a Home on the Last Frontier 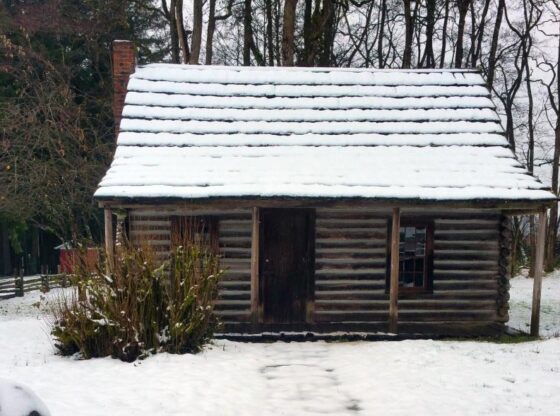 Sometimes the best plans go awry, and for intrepid female Matilda Glover Koontz Jackson, first aspirations of pioneering could easily have ended somewhere along the Oregon Trail. But she survived personal tragedy and, like so many brave women, pushed on to a new life.

A twenty-first-century author, Julie McDonald Zander, tells Matilda Jackson’s story, interweaving available historical facts and vivid imaginative powers. It’s a story that begged to be told and brings to light the resolute daring of all those who left the known eastern states to tame the wilderness of the great northwest—without maps or railways, in wagons bumping along a trail just barely carved out of the vast American heartland. Zander, a dedicated non-fiction newspaper reporter, created Chapters Of Life to highlight family histories. She was attracted to Matilda’s saga because she lives in the region Matilda would eventually call home, the region known in the 1800s as the Washington Territory. The result is a pensive, thoroughly researched biography, Washington Territory’s Grand Lady: The Story of Matilda (Glover) Koontz Jackson.

Matilda Glover was born in Maryland in 1811, when America had yet to be occupied much beyond the east coast. Her parents, opposed to slavery, intended to move Illinois, a new state and at that time not allied with the institution of slaveholding, but a family endowment caused a move to Missouri. There she grew up and married Nicolas Coonse (spelling later changed to Koontz). Times weren’t easy for the young couple. Their first year of marriage was marred by triple upheavals: the economic Panic of 1837, an enormous flooding of the Missouri River, and a cholera epidemic in the state and beyond.

When the Oregon Territory was officially designated, Nicolas, like thousands of other intrepid Americans, resolved to move there. It was hardly a decision to be taken lightly, but the potential gain would, they believed, outweigh the pains and perils of the trip. There was rich agricultural land to be had for homesteading, with fewer restrictions than in the settled east.  Maude and Nicolas had wed in 1837 in Missouri. By 1847, when they started out to join a covered wagon train along the Oregon Trail, they had four sons, and Matilda was probably pregnant with a fifth child.

The Trail was barely established when they joined up, beginning in western Missouri and winding through Nebraska, Wyoming, and Idaho. The Koontz family transport consisted mainly of six pairs of human feet since their six oxen already had a huge burden: a wagon filled with hundreds of pounds of supplies; everything they anticipated they would need to make the journey and arrive well-supplied: “blankets, clothing, flour, sugar, rice, coffee, bacon in brine, and dried peas, beans a fruit.” For advance preparation, they and fellow pioneers read and followed the suggestions of a book entitled Emigrants’ Guide to Oregon and California with the subtitle, All Necessary Information Relative to the Equipment, Supplies, and the Method of Traveling by Lansford W. Hastings, published in 1845. Hastings advised that children would be especially affected by the lack of their usual foods, and that the idea of buffalo hunting, while seeming practical, was actually far too time-consuming. He enumerated the needed provender to include kettles and pans, money for ferries and extra food, and a good gun with at least five pounds of powder.

Undertaking the envisioned 2,000-plus miles by covered wagon, arranging and re-arranging their possessions almost daily to keep the family fed, clothed, and protected from hostile influences, Matilda cooked and cleaned and watched over her sons. Along the way, babies were born, others died, and many graves were sited as the group progressed, so “Matilda kept her boys close.” She found time to bake a pie from foraged gooseberries. The party assayed higher ground and crossed the Great Divide. When they reached a particularly treacherous bend in the Snake River, Nicolas was among the first to attempt the crossing.  He was sucked into oblivion by a whirlpool as his wife and sons watched helplessly on the bank. The sudden overwhelming shock caused Matilda to go into labor early. Two days later her little daughter died and was buried near the site of her father’s passing.

Matilda suffered extreme trauma. Zander, who was determined not to create dialogue when none had been recorded, manages to give us a sense of the depth of her suffering at that crucial juncture. Yet turning back was never an option. Matilda and her sons pushed on to the Willamette region of northwest Oregon. There, despite her sorrows, she was among only a few women in the new territory, and soon attracted the attention of one of the region’s earliest settlers, Englishman John R. Jackson. Their marriage offered an opportunity for her sons, who would work on Jackson’s Highland Farm. Jackson had not only the hard work ethic of a landowner, but an entrepreneurial bent as well.  With Matilda at his side, he set up a little cabin courthouse to try local cases, and, seeing that travelers often passed through or near their modest homestead, they eventually expanded their holding to include “a wayside hotel and trading post.”

It was then and there that Matilda, finally settled and feeling more secure about her sons’ future prospects, gained a reputation as an excellent cook and welcoming hostess, entertaining in Jackson’s various enterprises, such notables as Generals Grant, Sheridan, and McClellan. Her domicile provided her comfort zone, perhaps not surprising after the horrors of her one youthful expedition. At her death, at home on Valentine’s Day, 1901 at age 90, she was remembered as so staunchly attached to home and hearth that she had never ridden a train, and had seen one only once!

Author Zander has employed diligent research to focus sharply on this courageous female, distinguished by her intelligence and her grit in the face of loss and hardship. A few letters exchanged between Matilda and her family are provided, and historical record reveals the dangers of the Oregon Trail at nearly every step. Matilda’s granddaughters later sought to immortalize her, chronicling her daily life on the homestead, stressing that those who came her way were always treated to warm hospitality and simple but memorably tasty cuisine. Through the many letters and papers written to, from, and about Matilda, we learn that she was a woman of Christian faith that never wavered and often inspired those around her. With Jackson, she engaged in patriotic activism—including helping to sew the first American flag for the newborn Territory of Washington. These historic papers, with their archaic spellings and highly formal prose, give a meaningful glimpse into the settler mentality.

Think about it, Dear Reader, especially now, during Women’s History Month. Matilda Jackson crossed the country in its early days, from the quickly urbanizing east coast states, through the disputed lands of the Midwest torn apart in the cruel context of slavery, and, despite suffering the tragic loss of husband and child, pushed onward to homestead on the last frontier. Some hardships she faced were common to all, but as a woman, there were the added burdens of pregnancy, infant and child care, and the need to keep a family fed and clothed while husbands and other menfolk risked, and like Nicolas, sometimes lost their lives in the barely known wilderness marked only by a thin dirt trail to the far ocean.

When I asked Zander about her obvious devotion to her central character in an interview segment on the well-established book review website Feathered Quill, she offered this reply: “Female pioneers are often overlooked in recounting the history of the region. Matilda Glover Koontz Jackson was known throughout the territory—even in the nation’s capital of Washington City—for her hospitality, but most of the books and articles focused on her husband… Matilda’s story struck me because, as a wife and mother, I couldn’t imagine the terror she must have felt watching her husband drown, leaving her a widow with four little ones heading west into an untamed land. What would she do? How would she survive? These questions plagued me, so I decided to find the answers.”

Though a modest Washington state park bears Matilda Jackson’s name, it was Zander’s perseverance that has brought this remarkable woman’s name into the spotlight.  Invoking the issue of Matilda’s place in the pantheon of notable pioneers, Zander told me, “When we launched the book live October 26, 2019, at the historic cabin where Matilda had lived, the Lewis County commissioners declared it ‘Matilda Jackson Legacy Day.’ Matilda’s role in the history of Washington Territory was significant, but she was a humble woman who never sought recognition or accolades. I hope this book stands as a testament to her strength, faith, and courage in the face of adversity.”