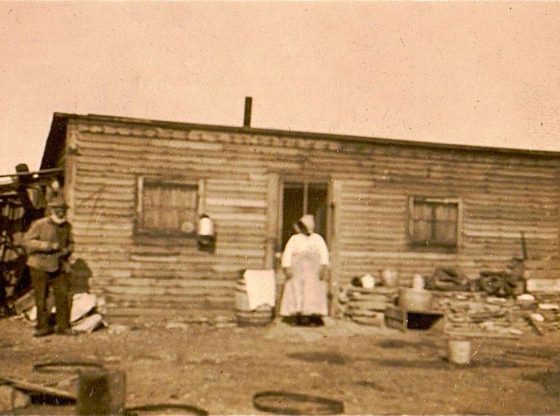 It was tough to be black in the U.S. in the era of “reconstruction” which some people frankly think of as a continuation—for African Americans—of destruction.  The destruction of their newfound freedoms, especially in the hidebound, bitter South. Jim Crow was the unwritten law of that land, prompting those who could to get out.

But the pathways out were equally tough—one immediate path was migration to Northern cities where work was hard but racial bias was less in evidence. Education, for the lucky few, was also a ticket to a better life. But one channel to fuller freedom was the continued reiteration of Lincoln’s Homesteading Act. The Acts gave people with guts and stick-to-it-tiveness the possibility to own a large piece of land in exchange for hard work, which most African Americans did not fear. And the simple ability to go West, to work and save and purchase and own and work some more on one’s own farm—not someone else’s—offered a great lure for former slaves.

The West, beyond the Mississippi, was not an immediate escape from prejudice and poor treatment for Americans of color. There had been limited slavery there, some of it rather surprising: the Mormons became proponents of slavery in their new home in what would become Utah even though their founder, Joseph Smith, a New Yorker, had been firmly against all forms of earthly servitude. The reasoning for approving slave owners for acceptance in Utah was simple: to get more, and more prosperous, residents. A similar issue overtook politically-minded folks establishing other new states: blacks, even freed slaves, could not vote until 1870, and new states needed voters to get representation.

But fortunately, the Homestead Acts did not exclude either blacks or females. The point of the Acts was settlement, pure and simple. So even though the odds were against them on many fronts, and the lifestyle would not be easy, some African Americans made the trek, and among them, some unattached women. As women’s historian, Glenda Riley (“American Daughters: Black Women in the West” as collected in African Americans on the Western Frontier), reminds us, there were more similarities than differences among black and white pioneer women, and this should be an impetus for us to find out more about this rather forgotten piece of Western history.

For this reason, we can be thankful for the diligent research by award-winning writer Ellen Baumler, some of whose writings are featured on the website of the Montana Historical Society. Baumler has authored books, short stories, and produced podcasts about Montana’s settlement years, often from the perspective of its bold women (Montana Moments and More Montana Moments). From her efforts, we have the tales of two indomitable black female spirits, two black women homesteaders who were not afraid to try and try again in a quest for that timeless American ideal: independence.

One was Annie Morgan. She’d been born a slave and set out for the West at the staunch and hardy age of 44. Think of it, my friends. Forty-four now may seem like an energetic, just-getting-started time of life. But in an era when total life expectancy for women was about 46, what could she, a person of color already worn down by poverty and prejudice, hope to gain? I guess the answer was, and still is, “everything.”

Legend has it that her “ticket” was a job as a cook for General Custer, though she was fortunate to drop out of his ranks before the massive defeat at Little Big Horn. She settled in Philipsburg, Montana, a town that in 2010 boasted a population of 820, so we can imagine what a tiny dot it was at the turn of the twentieth century. She was by then a widow, entirely self-reliant. She had some innately acquired medical skills along with her cookery, and became known, and one assumes affectionately, as “Aunt Annie.” Aunt Annie Morgan cured a well-known local with a serious alcohol addiction and stayed to occupy the abandoned farm where he’d dried out with her assistance.

One day, walking on the banks of Rock Creek, Aunt Annie, now 50, saw a man in distress. His name was “Fisher Jack” Case, a Civil War veteran, and he was languishing alone, suffering from typhoid fever. Doubtless, without the ministrations of Aunt Annie, he would have died where he lay. But she nursed him with what knowledge and ability she had, and he made a full recovery. In recompense, once he had recovered his vigor, Fisher Jack took on the job of fencing her land, land that would become, in 1913, Annie’s forest homestead claim. Whether it was romance or practicality, the two got along. They shared house, homestead, and income from that time on. They sold fruits and vegetables and kept some farm animals, and when Rock Creek began to develop as a touristic camping site, the entrepreneurial couple built a bunkhouse and campsites for further income.

The enterprising Annie died in 1914, and after five years, Jack was finally able to inherit her claim despite their lack of a marriage certificate. That he should own the land they worked together was Annie’s stated wish. It was doubtless a matter of great pride to her that she had something so substantial to leave as a legacy, after a youth spent in the utter destitution of slavery. Her humble homestead has been restored and is listed in the National Registry of Historic Places.

Bertie Brown’s story is somewhat different but shows no less fierce determination to survive and thrive in the newly opened Montana wild. She was born free, but had much reason to want to leave Missouri, with its parlous slave legacy. A young woman in her twenties, she made the trek to Montana where, in 1898, she settled near Lewistown. Later she made a formal claim for a homestead bordering Brickyard Creek. The claim was made in 1907 and she had proved it up by 1912, no small feat for a black woman homesteader on her own. Montana was not, as might be imagined, the easiest region to homestead, and did not attract as many prospective residents as the somewhat warmer, flatter fertile plains areas like Nebraska and Kansas. Brown’s claim was 160 acres, but by 1908, Montana was begging for new claimants, offering twice that much land and advertising the state’s virtues shamelessly (and perhaps, with a bit of exaggeration of its charms).

Little is known of Bertie Brown (or Birdie as she came to be known) before her acquisition of the Montana homestead. She said she was “abandoned”—a believable assertion considering how poorly women, and especially black women, were treated in those years. Birdie did what was expected to prove her claim—keeping animals, planting trees, and making a bit of cash on the side—with the sale of moonshine. This avocation was a boon to those who knew the tricks of the trade, one of them being the art of making booze that did not blind or kill its consumers. Birdie could do that, and to say that the path to her door was well-trodden would not be stretching the truth. Yes, Prohibition came. But out in the Montana wilderness, Birdie felt relatively safe from the long arm of the “revenoo-ers,” and the laws at first did little to affect her craft. She and her faithful black cat enjoyed convivial company and relative prosperity for a few years.

Tragically, though, the law did find her out, not long before the repeal of Prohibition, making her sudden demise a further irony. Birdie Brown changed her profession to dry-cleaning, which required the use of gasoline as a cleanser. One day, brewing up a (probable) last few jugs of moonshine and working away at the dry-cleaning tasks, her rather short but admirable existence ended, snuffed out by an explosion that resulted when those various chemicals combined in a fatal conflagration. Her home, which had been something of a traveler’s rest for the weary and alcohol-deprived, gradually deteriorated, though it can still be seen almost standing. Baumler says that even now, occasionally, a passerby will swear to have seen a black cat perched on a sagging windowsill.

Glenda Riley believes that, “Western black women still suffer from an unfortunate case of near-invisibility in the historical record.” Ellen Baumler has shaded in some of those areas of invisibility and there is doubtless more exploration to be done. February is Black History Month, my friends—and March is Women’s Month, both salutary times to remember our African American wom-ancestors. You won’t see them in cowboy films, even though many of them could sing and rope and ride with the best of their (white) sisters. They “womanned” stagecoaches, started clubs, took in laundry, ran boardinghouses, taught school, and pushed for their rights.

I wish Birdie Brown were here to pass around a spirituous libation, or Annie Morgan (who in 2013 was accepted into the Montana Cowboy Hall of Fame) to make a grand speech and offer a toast by the flickering campfire to the black woman homesteaders, past and present.