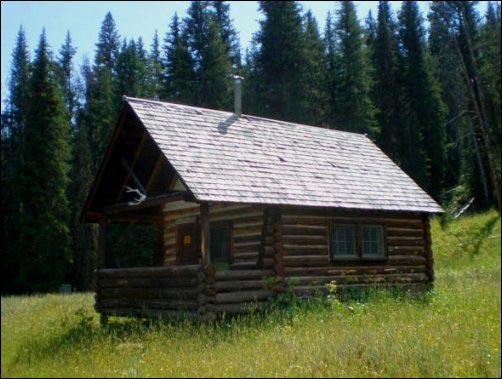 Just down the road from our house sits a sagging cabin made from hand-hewn logs with a low ceiling and raggedly sturdy stone fireplace standing guard on one end. Every time I pass that cabin—and I estimate it’s been thousands of times in 46 years—I wonder about the life that once filled its rustic confines.

There’s just something intriguing about log cabins… old ones for sure, but even new ones can carry

a built-in comfort not found in a brick and mortar home. Perhaps it’s all those early years playing with my Lincoln Log set as a small boy, I’m not sure but I feel it every time I even see a log cabin. I suspect, as a little kid, the draw was that someone had built a real building by stacking sticks together. Later on, I would study log-home construction and eventually deal in real estate for a few years. That’s when I learned the importance of words such as “ambiance,” “warmth,” and “feel”—all things you find in a log home.

While the log cabin seems to be an American icon—think Abraham Lincoln growing up in rural Illinois—in reality, building by stacking logs together to form walls reaches as far back as the Roman Empire. It’s documented that an architect of the time noted buildings formed by stacking logs horizontally and filling any gaps with mud and debris. Log-cabin construction is widely attributed to northern Europe. By the time their descendants rode ships across the ocean to the “New Country” the Europeans had nearly perfected building all sorts of homes and outbuildings

Those who originated log construction quickly moved from round log walls with gaping roofs to ventilate smoke from cooking and heating fires to hewn logs which allowed for a tighter fitment. More advanced double-notch joints as, copied in the children’s Lincoln Log toy design, were quickly found to make a building stronger with less reliance on filling the open space between with mud, or “chinking”.

It’s widely accepted that the earliest log structures built in the United States were erected by immigrants who migrated from Finland and settled down along the Delaware River in the early 1600s. Ukrainian transplants, as well as Germans, who came to America, used similar techniques. By the very nature of the construction materials, few examples of early log cabins prior to the 19th century remain today.

As early as the late 1800s interior walls were often covered, sometimes with newsprint. Old homes of all types can be found with a couple of layers of newsprint glued to the walls behind wallpaper as added insulation and backing. Faces of interior walls might also be plastered. A common application early on was lath strips nailed to the wall and then covered with a troweled layer of plaster, often with horsehair embedded in the mix for added strength. “Lath and plaster” continued until gypsum board was created in the early 1900s. The board started as layers of wool felt paper fused together with layers of plaster. By the 1930s a paper face had replaced the felt, and over the next couple decades technology allowed for infusing the plaster with tiny air bubbles to make it lighter but still rigid.

When you read or hear about a “historic” cabin the picture often comes to mind of a cracker box rectangle structure with a low pitched roof. In reality, log cabins today can be every bit as complex—and considering the work which goes into them to create the joinery and aesthetics, they’re even more complicated—than even the most exotic stone or stick structure. By the mid-1800s a new style of cabin was emerging out of the wooded mountains of the northeast. Referred to as “camps”, getaway spots for the wealthy sprouted up around lakes and rivers using locally-grown timber. Using native trees to provide whole or split logs for framing was a financial consideration—it was much cheaper than hauling milled lumber into the remote, often difficult to reach locations. The camps often relied on larger than normal fireplaces made of native stone to ward off the frigid northeastern chill.

By the late 1800s, the “Adirondack” cabin style was gaining popularity. The rustic beauty and simplicity of materials combined with the architecturally appealing angles made it a popular choice when the federal government established the first national park, known then as a public reservation, at what is now Yellowstone National Park. It would take another 44 years before President Woodrow Wilson would sign into being the National Park Service in 1916. But by then several log and stone buildings had been erected in Yellowstone, including the Old Faithful Inn built in 1903-1904, and still touted as the largest log structure in the world. The building was built from lodgepole pine and rhyolite stone, both native to the region. In the more than 100 years since being completed, the log structure has played host to millions of tourists.

By the early 1930s, the economy in North America was faltering. The stock market crashed, the Great Depression began, and thousands upon thousands of jobs dried up. As a way of jumpstarting the economy, President Franklin D. Roosevelt created a plan to put men back to work building public buildings and infrastructure. He created the Civilian Conservation Corps, or CCC, in 1933 and for the next nine years thousands of workers built log lodges and other public-use buildings throughout the west for the National Park Service and Forest Service.

By the latter part of that decade, the government formed yet another back-to-work program titled the Works Progress Administration, later changed to the Work Progress Administration, or WPA. Once again, unemployed workers were given paid jobs building schools, park buildings, and bridges across the nation. This time rustic log influence was infused with board, batten, and stone construction in park housing, administration and information buildings. The WPA did projects in every state in the nation, with many buildings still in use today.

Whether a log home or outbuilding for personal use, or a majestic hotel or visitors center for a national park, most log buildings share one of two roof structures—purlin or rafter. A purlin roof uses additional courses of horizontal logs to tie into the gable logs. Older log homes often used low pitched roofs with only two or three purlin logs in addition to the main beam. But in areas of heavy snowfall, and as square footage of living space became more important, the pitches of roofs increased to allow a true second floor living space. Now a half dozen or more purlin logs to create a high gabled roofline is common.

As with any construction method, a high-pitched roof handles heavy snowfall better. Also, a higher pitch to the roof can be beneficial in warding off leaks depending on the roofing material used. The purlins support the rafter logs, which in turn traditionally supported smaller roofing purlin strips onto which hand-split shingles were nailed. Later on, roof sheeting and composite shingles came into being and replaced the roofing purlins holding the individual runs of wooden shingles. But composite shingles just don’t carry the same warmth as wooden shingles, or even metal roofing.

With a true rafter roof, sawmill cut boards were used to build rafters supported by a main beam. The rafters were placed closer together to eliminate the need for larger supportive purlin logs. If anything, supports made of sawn boards were used in place of log purlins. Roofing purlins would then be nailed horizontally in courses onto the rafters to accept shingles made of pine or cedar. As alluded to in the previous paragraph, roofing purlins are used today to support runs of corrugated metal.

If the cabin or home has an open, or cathedral, ceiling and will be heated it’ll be necessary to insulate the underneath face of the metal. Otherwise, the temperature difference between the cold outer and heated inner surfaces will cause the metal to develop condensation and “sweat” in the winter. No one wants to sit inside a warm cabin and be rained on from a sweating roof. 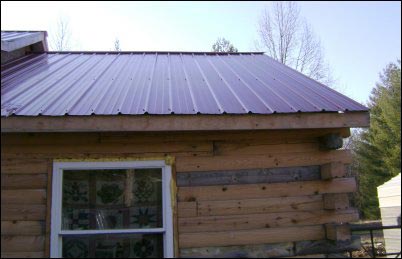 As with every other aspect of log construction, the process of insulating between the logs has undergone major improvements in the past couple thousand years. History shows the first substance to be used for sealing openings between logs was mud. Eventually, someone thought to mix dried moss with the mud to provide additional insulating qualities and help hold the mud together.

As time marched on, the filler between the logs was given the name “chinking”. The use of mud eventually progressed to more of a mortar mix. Then in the latter 20th century, with the discovery and improvement of plastics, the preference turned to materials that stay somewhat elastic despite heat or cold. Several companies now offer products with names like “Perma-Chink” which offer a better seal, less prone to drying and cracking.

With the development of D-style logs, the need for chinking was reduced drastically. Instead of courses of logs being dovetailed or otherwise notched and joined, which leaves large gaps between each course, now walls could be stacked in an almost solid horizontal stack. Every other course extends past the corner locking the logs together with the walls attaching at both ends. The next layer of logs falls just short of the corner while the same course of logs on the two adjoining walls extends past the corner this time. Then the process repeats itself until a solid structure is built. Joints at the corners are sealed with a permanent chinking or silicone sealant. As the logs complete the drying process and settling it will be necessary to seal the joints every few years.

With logs now tightly stacked to form a wall, what are the insulating properties of the logs? The generally acceptable “R” value, or ability to ward off cold, is one unit per inch of log thickness. If logs were square, then a 6-inch log would have an insulating value of R-6. But logs are not usually cut square. So you have to estimate the thickness somewhere between where the surfaces of the logs touch and the rounded faces. If a D-style log was cut eight inches tall and 10 inches thick at its thickest, then the R-value might be 9—the difference between the 8-inch mating faces and 10-inch thickness at its widest curvature. The beauty is that if you purchase sawn logs from a mill or log home supply company the R-value math has likely been done for you.

Long gone are the days when building yourself a log cabin meant heading out into the timber dragging a crosscut saw and broad ax… and having a strong back. Nowadays anyone can enjoy the warmth and feel of living in a log home, and the amount of labor you contribute is up to you. Log home companies are plentiful on the Internet, and a log house can hold all the creature comforts and conveniences found in any other home. From wiring and plumbing ran inside specially-cut logs, recessed ducts, and lighting hidden with well thought out plans, to exterior sealers that let the natural beauty of the wood shine through for decades with proper care, modern log homes offer it all with a look that remains forever timeless.