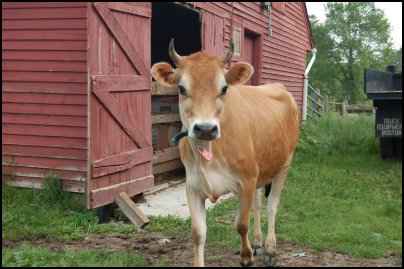 On your way to greater self-sufficiency, you have purchased a dairy cow or goat.  You should feel proud that you are taking responsibility for your family’s health and you are doing what’s right for the environment and the economy.  However, I would like to offer even more motivation for your daily trudges to the barn.  You may not be aware of the amazing array of health benefits that raw milk offers.

The Darwin of Nutrition

Weston A. Price, known as the “Darwin of Nutrition”, was a dentist who wanted to understand the increase in degeneration he was seeing in his dental practice – crowded arches, cavities, crooked teeth.  So, he took to the field (a man after our own hearts).  He traveled to isolated pockets of people, the so-called “primitives” such as the Inuits, the Maori, South American Indians, the Gaelics of the Outer Hebrides, the Aborigines, and the Swiss in the Alpine villages.

On his travels he found people who were relatively free of degenerative diseases and tooth decay.  They had straight teeth, strong bodies, easy reproduction, and emotional stability.  While living in such diverse locations, these healthy people shared one thing in common: a traditional diet.  A diet free of refined or denatured food and full of animal protein, saturated fats, and some raw animal products.  Once a group of people abandoned the traditional diet for a Western diet, the changes evident in one or two generations was stunning – crowded teeth, narrow faces, and the onset of “Western” diseases, including emotional ones.

Milk and dairy products are some of the raw animal products that are consumed.  Here are some of the benefits of raw milk that you can think about as you milk the cow at 5 AM.  Raw milk contains:

Nearly fifty percent of the calories in raw milk are from butterfat.  Yum. Butterfat contains higher amounts of vitamins A and D, which are necessary for the assimilation of calcium and protein.  The fatty acids in butterfat also help to stimulate the immune system and contain lipids which prevent intestinal distress.

Raw milk doesn’t contain additives, unlike the coloring in typical butter, the bioengineered enzymes in mass cheese production, and the neurotoxic amino acids in skim milk.

The Problems with Commercial Milk

So what’s the big problem with typical commercial milk?  Here are the facts you can share with your well-meaning relatives who are appalled by the idea of drinking milk straight from the cow.  It’s a long list, so hold on.  Pasteurization kills enzymes, diminishes vitamins, denatures milk protein, destroys vitamins C, B12, and B6, kills good bacteria, promotes pathogens, leads to growth problems in children, and increases the likelihood of allergies, osteoporosis, arthritis, heart disease, and cancer.  Many calves that are fed pasteurized milk die before maturity.  Whew.  No wonder milk has been getting such a bad rap lately.  However, it’s the pasteurization and the homogenization that’s the real problem.

Homogenization has been linked to heart disease.  When fat globules are broken up mechanically, an enzyme known as xanthine oxidase is released and penetrates the intestinal walls.  Once xanthine oxidase reaches the bloodstream, it is capable of creating scar damage in the heart and arteries.  This, in turn, causes the body to release cholesterol into the blood in an attempt to cover the scar with fatty material.  Thus, the likelihood of arteriosclerosis developing.

The big issue the opponents of raw milk bring up is one of safety.  However, pasteurized milk is actually linked to higher numbers of illnesses than other regulated raw milk products.  There are four factors to look at when it comes to food safety: the health of the cows, feed, confinement, and collection.

Collection is an easy one to consider.  Some workers in commercial plants figure that the milk’s going to be pasteurized anyway and so they don’t have to be as stringent about sanitary rules.  Also, they’re not drinking it, so who cares?  Most small farmers and homesteaders know the importance of washing hands, washing udders, keeping the collection area and equipment clean, and refrigerating the milk soon after collection.

The care of the cows is a more complex issue in terms of safety and milk quality.  Cows fed mostly grains have higher levels of pathogenic bacteria in their milk.  It has been noted that pasture raised, grass-fed cows live about 15 years and can birth 12 calves in that lifetime; however, cows fed soy meal live about six years and birth three calves.  Commercial cows are fed not only soy and grains but bakery waste, citrus peels laced with pesticides, and pellets with chicken manure in them.

Pesticides, estrogens, antibiotics, trans fats and other toxins can all make their way into the milk.  The milk is only as healthy as the cow it came from.  On the other hand, cows fed a healthy diet of green grass supplemented with hay, silage, and root vegetables in the winter months, have milk with higher levels of beneficial bacteria such as Lactobacilllus, which in turn keep the bad bacteria, like E. Coli, in check.  For instance, the Swedes pasture-raise their cows and have no incidences of Salmonella in their milk.

Types of Cows, Types of Milk

So you’re convinced that raw milk is good for you (thank goodness, since you have that cow lowing in the field out there).  But it’s never as easy as you would think because not all milk, even raw milk, is considered equal.

Many people find that their milk allergies and intolerance vanish once they start drinking raw milk.  However, this isn’t always the case and some of this has to do with the breed of cows that are most common in the U.S.: the Holstein.  This is discussed in Dr. Keith Woodford’s book, The Devil’s in the Milk.

Milk is comprised of three parts: the fat, the whey, and the milk solids.  The milk solids contain different proteins, one of which is casein, and it’s the beta-casein that may cause problems.  Milk from old breed cows such as Jerseys and Asian and African cows (known as A2 cows) have the “original” form of beta-casein but new breeds (known as A1 cows), such as Holsteins, have a mutated version.

The “A1 milk” doesn’t bond as well with a small protein called BCM 7.  The problem with BCM 7 is that it is an opiate-like substance that may cause neurological problems, most notably, autistic and schizophrenic changes.  BCM 7 also interferes with the immune response and may increase the likelihood of Type 1 diabetes.  Dr. Woodford has shown a direct correlation between widespread consumption of A1 milk and the rise in type 1 diabetes, autism, schizophrenia, auto-immune disease, and heart disease.

It is interesting that the French have never accepted these A1 cows due to the belief that these cows produce inferior milk.

The good news is that the absorption of BCM 7 is lower in people with healthy digestive systems.  Also, BCM 7 is not found in goat’s or sheep’s milk.

Goat’s milk has the advantage of being easier to digest; this is in part because the protein curds that are formed in the stomach are softer than that of cow’s milk.  This, in turn, makes digestion faster and easier.  Almost half the people who are lactose intolerant can drink goat’s milk.  In addition, goat’s milk contains only trace amounts of an allergenic casein protein, alpha-S1, which is found in cow’s milk.  Scientific research has not discovered a lower incidence of milk allergy with goat milk; however, many mothers would disagree and this may be another case where mother’s wisdom and attention overrides the evidence of a laboratory.

In the goat world, the Saanen is comparable to the Holstein in that it produces a high quantity of milk with a lower fat content.  On the other hand, the Jersey of the goat world is the Nubian, which produces less milk but with a higher fat content.  The LaMancha, Toggenburg, Alpine, and Oberhasli fall in between the two extremes.

Sales of raw milk are allowed in twenty-eight of the fifty states.  In another five states, raw milk may be sold for “pet consumption”.  In some of these states, there are laws under consideration that would require all “pet milk” to be treated with a charcoal dye so that humans will be sure not to drink it.

In some of the remaining states, such as Colorado, Wisconsin, and Virginia, raw milk is available by “cow sharing”.  Cow sharing or “herd sharing” is when a group pays a farmer fees for maintaining and milking a cow and then they pick up the milk from the “shared cow”—but they do not pay for the milk itself.  If cow sharing is not allowed, some people have organized “farm sharing” in which a group of people buy non-voting shares in a farm and are therefore able to obtain milk from the farm in which they own shares.

Obviously, there are other benefits to be had from consuming raw milk.  Raw milk bequeaths a myriad of health benefits but it also makes greater economic and environmental sense.  Drinking raw milk may be your best economic option because you already have the animal; however, even if you have to purchase your raw milk, you are supporting a small farmer and helping him or her maintain their lifestyle.  Raw milk is also the best environmental choice because a small dairy production allows for a “mixed-use” farm, which is the most in-sync with nature.  So, if you already have your dairy animal(s), congratulate yourself on (yet another) wise decision.  If not, consider supporting a local farmer and buying raw milk and raw milk products.  And if you are banned from buying raw milk, fight for your Constitutional right.