Reclaim Your Health with Raw Milk

Home /Health and Diet/Reclaim Your Health with Raw Milk 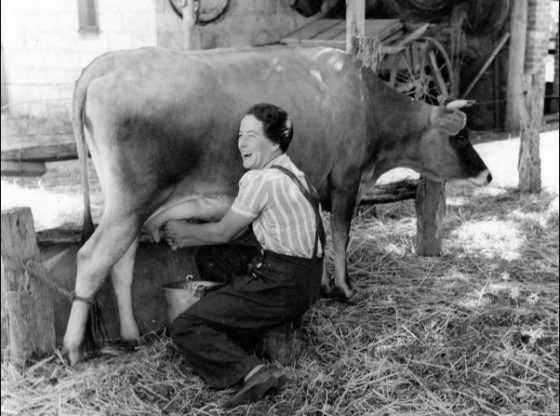 Raw milk.  The term makes many people shudder.  Most states don’t allow raw milk to be sold in the store and the CDC has all sorts of terrible things to say about raw milk—of course they have a lot of terrible stuff to say about under-cooked eggs, yet myself and many others have been enjoying our over-easy eggs for years and are still kicking!  You can’t believe everything you read; think critically and check multiple sources.  After a lot of research I found what I believe to be a trusted source of information, the Weston A. Price Foundation.

The Weston A. Price Foundation is a wealth of information.  According to their website, “The foundation is named after Dr. Weston A. Price (1870-1948), a Cleveland dentist, who has been called the ‘Isaac Newton of Nutrition.’  In his search for the causes of dental decay and physical degeneration that he observed in his dental practice, he turned from test tubes and microscopes to unstudied evidence among human beings.  Dr. Price sought the factors responsible for fine teeth among the people who had them: the isolated ‘primitives.’  The world became his laboratory.  As he traveled, his findings led him to the belief that dental caries and deformed dental arches resulting in crowded, crooked teeth and unattractive appearance were merely a sign of physical degeneration, resulting from what he had suspected: nutritional deficiencies.

Price traveled the world over in order to study isolated human groups, including sequestered villages in Switzerland, Gaelic communities in the Outer Hebrides, Eskimos, and Indians of North America, Melanesian, and Polynesian South Sea Islanders, African tribes, Australian Aborigines, New Zealand Maori, and the Indians of South America.  Wherever he went, Dr. Price found that beautiful, straight teeth, freedom from decay, stalwart bodies, resistance to disease, and fine characters were typical of primitives on their traditional diets, rich in essential food factors.  When Dr. Price analyzed the foods used by isolated primitive peoples he found that they provided at least four times the calcium and other minerals, and at least TEN times the fat-soluble vitamins from animal foods such as butter, fish eggs, shellfish, organ meats, and raw milk.”

The Weston A. Price Foundation contends that, “raw milk contains many components that kill pathogens and strengthen the immune system.  These include lacto-peroxidase, lacto-ferrin, anti-microbial components of blood (leukocytes, B-macrophages, neutrophils, T-lymphocytes, immunoglobulins, and antibodies), special carbohydrates (polysaccharides and oligosaccharides), special fats (medium chain fatty acids, phospholipids, and spingolipids), complement enzymes, lysozyme, hormones, growth factors, mucins, fibronectin, glycomacropeptide, beneficial bacteria, bifidus factor, and B12-binding protein.  These components are largely inactivated by the heat of pasteurization and ultra-pasteurization.  This five-fold protective system destroys pathogens in the milk, stimulates the immune system, builds healthy gut wall, prevents absorption of pathogens and toxins in the gut and ensures assimilation of all the nutrients.  So powerful is the anti-microbial system in raw milk that when large quantities of pathogens are added to raw milk, their numbers diminish over time and eventually disappear.”

Studies show that children fed raw milk have more resistance to TB than children fed pasteurized milk (Lancet, p 1142, 5/8/37); that raw milk is very effective in preventing scurvy and protecting against flu, diphtheria, and pneumonia (Am J Dis Child, Nov 1917); that raw milk prevents tooth decay, even in children who eat a lot of sugar (Lancet, p 1142, 5/8/37); that raw milk is better than pasteurized milk in promoting growth and calcium absorption (Ohio Agricultural Experiment Station Bulletin 518, p 8, 1/33); that a substance present in raw cream (but not in pasteurized cream) prevents joint stiffness and the pain of arthritis (Annual Review of Biochemistry, 18:435, 1944); and that children who drink raw milk have fewer allergic skin problems and far less asthma than children who drink pasteurized milk (Lancet 2001 358(9288):1129-33).

Once I had done adequate research, it was time to find a local source of fresh milk.  I knew it was important to find a farm where the cows were raised on pasture.  I also knew that they should be fed no (or very limited) organic grains.  Last, but not least, the cows had to be very healthy, and the premises had to be clean.  After chatting with a lady at my local farmer’s market who was selling goat’s-milk soap, I learned that she was purchasing her milk from a farm the next town over, who met all of my requirements.

The farm is run by a husband and wife who are completely dedicated and passionate about raising wholesome, organic, pastured cows, goats, and pigs.  They are the real deal.  Before you purchase raw milk make sure you know what the cows are eating!  The Weston A Price Foundation emphasizes that, “Real feed for cows is green grass in Spring, Summer, and Fall; stored dry hay, silage, hay, and root vegetables in Winter.  It is not soy meal, cottonseed meal or other commercial feeds, nor is it bakery waste, chicken manure, or citrus-peel cake laced with pesticides.  Vital nutrients like vitamins A and D, and Price’s ‘Activator X’ (a fat-soluble catalyst that promotes optimum mineral assimilation, now believed to be vitamin K2) are greatest in milk from cows eating green grass, especially rapidly-growing green grass in the spring and fall.  Vitamins A and D are greatly diminished, and Activator X disappears, when milk cows are fed commercial feed.  Soy meal has the wrong protein profile for the dairy cow, resulting in a short burst of high milk-production followed by premature death. Most milk (even most milk labeled “organic”) comes from dairy cows that are kept in confinement their entire lives and never see green grass.”

Before I could purchase the milk, I had to purchase containers for the milk.  Here in Minnesota, fresh milk can be sold directly from the farm, but you must bring your own containers.  I use a combination of gallon and half-gallon jars.  The milk is whole milk.  Which does not make you fat, and is very good for you.  There is a layer of cream that rises to the top; we give the milk a shake to mix it up before we use it.  It stays good and fresh for about a week and then it begins to get a sour taste to it.  However, that sour taste doesn’t mean it can’t still be used; it is perfectly suitable to use.  At this point I use it for cooking.  Sarah Pope, “The Healthy Home Economist”, says this regarding sour milk: “Sour raw milk is quite unlike pasteurized milk that has gone past its ‘use by’ date.  Pasteurized milk goes putrid and must be thrown out at that point, but raw milk is still a highly useful item in the kitchen.  The difference is that pasteurized milk is a dead food–there are no enzymes or probiotics present. So, when store milk goes bad, it becomes a huge food-borne illness risk to consume it and it must be discarded.  Raw milk, on the other hand, is loaded with enzymes and probiotics.  When raw milk starts to sour, it simply means that beneficial bacteria called probiotics have started to use up the lactose (milk sugar) which causes the milk to no longer taste as sweet.  Raw milk that tastes sour is still very much safe to drink and is even more beneficial to health as the higher level of probiotics have initiated the fermentation, or clabbering, of the milk.”

As I mentioned earlier, whole milk does not make you fat.  In fact, skim milk is more likely to make you fat.  Sarah Pope says this: “How does drinking skim milk make kids (and adults) fatter? This apparent paradox occurs when you reduce the saturated fat in a person’s diet and he/she turns to carbs (grains and sugars primarily) to fill in the gap.  It is the grains and sugars that truly make you fat, not saturated fat.  I’ve said before on this blog that the more butter and cream I eat, the easier it is to maintain my weight.  MUCH easier.  The same goes for all of us.  If you drink skim milk, you will be missing out on the satiating, blood sugar and insulin steadying, effects of saturated fat, so your body will automatically give you sugar and carb (grains) cravings to make up for it.  The body is able to MAKE saturated fat out of sugars, hence the sugar cravings that are impossible to control when you eat a low-fat diet that includes skim milk.”

Since my family made the switch to fresh milk, there have been a lot less tummy aches and constipation issues in this house!  Fresh milk is much easier to digest then pasteurized milk.  According to the Weston A. Price Foundation, “Raw milk contains enzymes and encourages beneficial bacteria that contribute to easy digestion and ensure that all the vitamins and minerals are absorbed.  Pasteurization warps and distorts the enzymes and other proteins in milk so that the body thinks they are foreign, and has to mount an immune response.  This makes pasteurized milk very difficult to digest.  In fact, the market for fluid milk has been declining at 1 percent per year for the past thirty years.  Fewer and fewer people can digest processed milk.”

I’ve learned that pasteurized milk is not good for the body.  The Weston A. Price Foundation asserts that, “Pasteurization destroys enzymes, diminishes vitamin content, denatures fragile milk proteins, destroys vitamins C, B12 and B6, kills beneficial bacteria, promotes pathogens and is associated with allergies, increased tooth decay, colic in infants, growth problems in children, osteoporosis, arthritis, heart disease and cancer.  Calves fed pasteurized milk do poorly and many die before maturity.  Raw milk sours naturally but pasteurized milk turns putrid; processors must remove slime and pus from pasteurized milk by a process of centrifugal clarification.  Inspection of dairy herds for disease is not required for pasteurized milk.  Pasteurization was instituted in the 1920s to combat TB, infant diarrhea, undulant fever and other diseases caused by poor animal nutrition and dirty production methods.  But times have changed and modern stainless steel tanks, milking machines, refrigerated trucks and inspection methods make pasteurization absolutely unnecessary for public protection.  And pasteurization does not always kill the bacteria for Johne’s disease suspected of causing Crohn’s disease in humans with which most confinement cows are infected.  Much commercial milk is now ultra-pasteurized to get rid of heat-resistant bacteria and give it a longer shelf life.  Ultra-pasteurization is a violent process that takes milk from a chilled temperature to above the boiling point in less than two seconds.”

Driving out to the farm, which is about 25 minutes from my house, every week or two does take a little more time and effort than picking it up from the store in town.  It is also a little more expensive, than the conventional milk at the store, (but cheaper than the store’s pasteurized organic milk).  However, knowing, seeing, and feeling all of the benefits of fresh milk firsthand, I can tell you that it is worth it.  I’m also happy that I’ve gotten to know the people who are behind my food.  They are the nicest couple and I enjoy getting to visit with them every time I go to their farm.  They even have customer appreciation picnics in the summer featuring their meat, milk, and produce from their garden.  I look forward to it all year long!  I am happy knowing that my money is going to them and not getting sucked up by middle men, as is the case with store-bought conventional milk.  If you’ve been debating switching to fresh, raw milk, go for it!  If you don’t have farm nearby that offers fresh milk, perhaps it’s time to purchase your own dairy cow!

My Experience with Home Milking: The Good, the Bad, and the Ugly