If you manage a home garden, you know well the satisfaction that comes from growing your own produce.  That same pride manifests when you fill your basket with the fresh country eggs your home flock dutifully supplies.  You’re eating off your land; you are becoming more self-sufficient all the time.  When you go to the grocery store for what you aren’t producing on your own, you find you’re buying less.  What’s left on your dwindling grocery list?  Milk, cheese, butter, yogurt, and beef?  Then the next logical step is to look into purchasing your first cow.

In reality, though, you will probably need to get a pair of cows at least.  Cows are herd animals and thrive best in groups, much like families and close groups of friends.  To support your new herd, you will need several acres of pasture for grazing, and you should plan to feed hay, grain crops, and any extra produce you have available and aren’t going to preserve.  You will need a place to shelter your cattle for calving and in inclement weather, and sturdy and complete fencing is a necessity.  Sound like a lot?  Well, it depends on the size of your cows.

Miniature cattle present the perfect solution to the homesteader on just a few precious acres.  Say you only have one or two good grassy acres for pasture.  You could only keep one standard size cow on that parcel, and one lonely cow would not be as happy or productive as a cow with companions.  Two or three miniatures would be ideal for the pasture that size.  More cows means higher yields.  Your miniatures would also be easier on your pasture land than standard sized cattle.  Their petite hooves and reduced body weight are naturally easier on the land and less problematic on your fencing and equipment as well.  Because they are easier to handle, you’ll maneuver them from paddock to paddock effortlessly as you rotate your pasture.  Smaller cattle are easier to handle as well, so teaching the younger generations of your family cattle husbandry skills is safer and more enjoyable with miniatures. 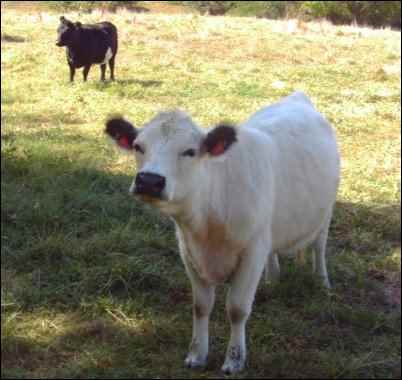 With the capacity to keep three miniatures on your tract, you now have the opportunity to produce more beef and dairy.  If one of the minis you maintain is a bull, and the other two are unrelated heifers or cows, you can breed them and your land is now not only healthier, but more cost-effective than if you were keeping one standard sized cow.  If, for example, one cow throws another heifer while the other throws a bull calf, you have a few options to consider.  You can sell both calves; now the cows will be ready for milking, and they may have just paid for themselves in what you made on their calves.  And as an added bonus, you just eliminated the need to purchase any commercially produced dairy.  Alternatively, you can keep the bull-calf, castrate him, and raise him up for beef for your freezer.  You could keep your heifer and purchase semen to breed her artificially when the time comes.  You could also butcher them both for veal. 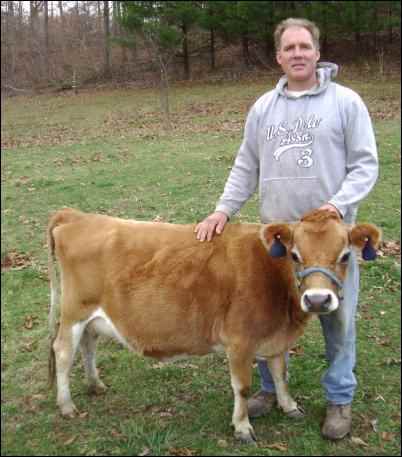 Once your heifers have calved, you have two momma cows making all the milk you need, and then some.  One miniature cow can keep a small family in dairy.  A miniature Jersey can endow you with 1 to 1 ½ gallons per milking, an average of three gallons per day.  That amount provides you with plenty to make your own butter, cheese, yogurt, and ice cream every week, and you may even have some left over for your family, friends, or neighbors.  With two mini’s milking every day, you will have plenty for clabber for your chickens and hogs.

Clabber is a lot like thick yogurt.  It is the by-product of unpasteurized milk that has been left out to ferment.  Your non-bovine farm animals will benefit greatly from the herd and the clabber you make from the raw milk it produces.  Your chickens and hogs need the protein, calcium, and good bacteria that clabber can provide.  To make your own homemade clabber, you need unrefrigerated raw milk, a clean crock or jug to keep it in, and a place to let it develop into clabber undisturbed and at room-temperature.  Soon you will see the milk start to separate and a yellowish liquid will begin to float above the white.  That yellow liquid is the whey; the white is the true clabber.  When the whey (the protein) has completely separated from the clabber (the calcium), you are free to feed the whole lot of it to your feathered friends and various farm animals.  Your entire farm has benefited from your miniature cattle, and thanks to the dairy they’re producing, you’re saving money at the grocery and at the feed store.

If you’re new to raising cattle, keep in mind that dairy cows require a more nutrient rich diet than beef cattle.    You’ll need to feed hay and grain, even if your miniature herd grazes.  A diet consisting primarily of pasture grass will give your cattle digestive issues that will leave your dear manure pile lacking.  This will not do.  A healthy manure pile is worth its weight in gold.  The grains that cattle consume are not much different than what you may already be growing to feed your other livestock.  They enjoy corn, of course, as well as oats, barley, wheat, sorghum, and soybeans.  While a standard size dairy cow may devour your entire grain crop, a miniature will eat one-third as much.  So, if you were to need six bushels of grain for a standard Holstein, you will only need two for your mini.  You’ll be able to maintain your poultry and swine feed while feeding your cattle as well if you manage your feed plot effectively.

With corn prices rising astronomically every year, and the price not forecasted to ever come back down, the advantage of being able to feed your livestock from your own land is priceless and possible for the homesteader who is feeding a fraction of what a typical cattle rancher needs.  Except for portion size, your miniature’s diet will not differ from a standard bovine menu.  If you would fill a bathtub sized trough with fresh clean water for one big cow, you’ll fill the same trough for two minis.  Your salt block, much needed by your dairy cows, will last longer. 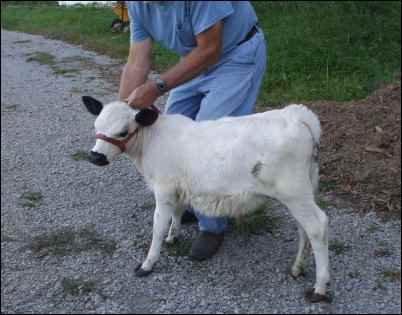 The bovine species is a docile one, and cows that are well socialized and raised among other farm animals can be very curious and affectionate.  Calves can be lead trained and handled by small children, as Pat demonstrates in this photo of his son, Isaac Schout, seven years old, halter breaking a miniature Jersey bull calf.  Many farmers have asserted that their herd mingles well with their goats, sheep, dogs, and cats.  Some 80% of the miniature cattle are purchased as pets, by some in suburban areas as well as rural dwellers.  “Some folks ask me if I think that miniature cattle will be a ‘fad’.  I respond by saying that unlike some miniature livestock, miniature cattle are functional and productive farm animals.  In addition to being great pets, they also provide great tasting milk and beef.” – Pat Schout. 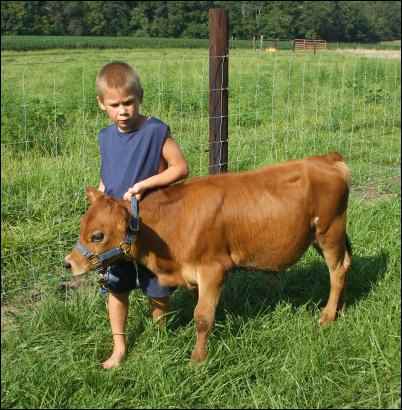 Miniature breeds of other species, dogs for example, have been known to have genetically related health problems.  In miniature cattle, there is one rare genetic trait commonly referred to as the bulldog gene.  Scientifically, it is called “chondrodysplasia”.  This gene manifests as a physical deformity and can be identified with a blood test prior to livestock purchase.  The Dexter breed is the most common breed associated with this genetic abnormality.  In Dexter’s, the gene can cause spontaneous abortion at 7 to 8 months of gestation or still-birth.  Physically, the bulldog gene is evident in cattle with a nose that appears to have been pushed inwards and the head of the calf appears more rounded, much like an actual bulldog.

Both sire and dam must carry the recessive bulldog gene to produce a calf with the malformation.  However, if both sire and dam are tested for the gene and prove to be carriers, the calf still has only a 25% chance of being affected, though it will certainly carry the gene and possibly pass it on to its own offspring.  Calves bred from one parent-carrier and one parent-non-carrier will need genetic testing; they stand the same chance of inheriting the gene as not. 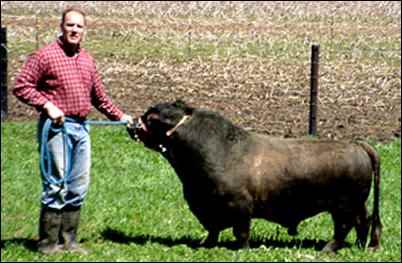 The magic of the breeding world has evolved miniature breeds out of just about any farm animal you could want.  It is possible to possess, easily and literally, a miniature farm.  In addition to your miniature cattle herd, you can have miniature horses which can be trained as guide animals for the blind.  Mini donkeys can pull up to a hundred pounds of cargo and are used to pull carts and equipment.  Miniature goats are used for dairy while pygmy goats are used for meat.  Bantam chickens are kept as pets and supply small eggs.  Tea-cup pigs are excellent indoor pets as they can be house-trained and are extremely clean animals.  The miniature pigs are also used in medical research.

Goats are common stock among homesteaders, and it makes sense since goats require less in terms of feed and shelter than standard cattle.  Mr. Schout says “Often homesteaders and hobby farmers’ transition into miniature milk cows after first beginning with goats.  When folks realize that they can enjoy cow’s milk in the smaller quantities that a mini milker produces, their interest is aroused.  My miniature milk cows average about 500 lbs at maturity, which is recognized as three years of age.”  If goats already occupy part of the pasture, a miniature calf will most likely try to join the group if allowed to do so.

Though miniature cattle are not considered common, there are many avenues available to those looking for more information before they make their first purchase.  The Schouts can be reached on Hickory Ridge Farm at www.hickoryridgefarms.org.  Breeder registries include The International Miniature Cattle Breeds Registry Inc., The American Miniature Jersey Association, and The International Miniature Zebu Association.  Purebred and crossbred animals can be registered with The International Miniature Cattle Breeds Registry Inc., though all registrations are temporary until cattle reaches maturity.  Height, age, sex, breeder, owner, date of birth, breed, sire and dam information will be requisite to register.  Copies of pedigree of sire and dam and a photograph of the animal to be registered will be required as well. 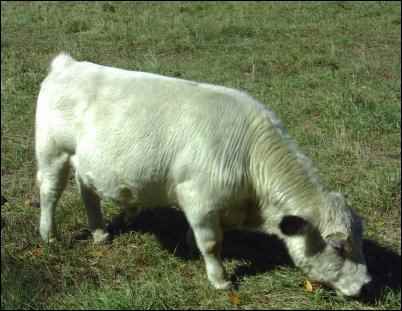 On The Home Front

Those couple of grassy acres on the farm are calling for the miniature cattle your homestead needs.  Your investment will offer returns financially in terms of money earned and money saved, the best kind of investment there is.  You will reap the rewards of the beef, dairy, and manure you will produce 25-30% more efficiently than your neighbors with standard size cattle.  Along with your garden, your flock of layers and broilers, and your swine, your cattle makes you self-sufficient.  No longer dependant on your grocer.  You will be unaffected by rising beef and dairy prices.  And, you will have the best ice cream on the block.

Reflections of a Second Generation Homesteader
Adam vs. the Post Pounder