The Origin of the Robin

Home /History, Myth and Legend/The Origin of the Robin 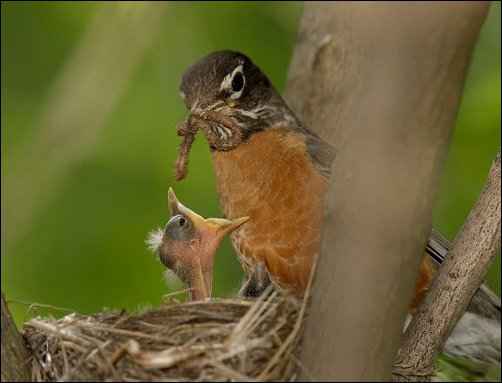 Publisher’s Note: The Origin of the Robin is a Chippewa story.  Jane Johnston Schoolcraft said that all the Chippewa of her acquaintance said they remembered the story as one of their earliest recollections.

The Corn Story may leave us with the impression that Native American myths were educational stories to inspire the children of the tribe, but here the lesson of The Origin of the Robin is clearly intended for parents.

An old man had an only son, a fine, promising lad who had come to that age which is thought by the Chippewa to be most proper to make the long and final fast that is to secure through life a guardian spirit on whom future prosperity or adversity is to depend, and who forms and establishes the character of the faster to great or ignoble deeds.

This old man was ambitious that his son should surpass all others in whatever was deemed most wise and great amongst his tribe.

To fulfill his wishes, he thought it necessary that his son must fast a much longer time than any of those persons known for their great power or wisdom, whose fame he envied.

He, therefore, directed his son to prepare with great ceremony for the important event.  After he had been in the sweating lodge and bath several times, the father ordered the son to lie down upon a clean mat in the little lodge expressly prepared for him, telling him at the same time to bear himself like a man, and that at the expiration of twelve days, he should receive food, and the blessings of his father.

The lad carefully observed this injunction, laying with his face covered with perfect composure, awaiting those happy visitations which were to seal his good or ill fortune.  His father visited him every morning regularly to encourage him to perseverance, expatiating at full length at the renown and honor that would attend him through life if he accomplished the full term prescribed.  To these admonitions, the boy never answered, but lay without the least sign of unwillingness until the ninth day, when he addressed his father.

“My father, my dreams are ominous of evil!  May I break my fast now, and at a more propitious time, make a new fast?”

“My son, you know not what you ask!”  If you get up now, all your glory will depart.  Wait patiently a little longer.   You have but three days yet to accomplish what I desire.  You know, it is for your own good.”

The son assented, and covering himself closer, he lay until the eleventh day, when he repeated his request to his father.  The same answer was given to him by the old man, adding that the next day he would himself prepare his first meal and bring it to him.  The boy remained silent, but lay like a skeleton.  No one would have known he was living, but by the gentle heaving of his breast.

The next morning the father, elated at having gained his end, prepared a repast for his son and hastened to set it before him.  On coming to the door, he was surprised to hear his son talking to himself.  He stooped to listen and, looking through the small aperture, was astonished when he beheld his son painted with vermillion on his breast, and in the act of finishing his work by laying on the paint as far as his hand could reach on his shoulders saying at the same time, “My father has ruined me as a man, he would not listen to my request, he will now be the loser.  I shall be forever happy in my new state for I have been obedient to my parent, he alone will be the sufferer for the Spirit is a just one, though not propitious to me.  He has shown me pity and now I must go.”

At that moment the old man broke in, exclaiming, “My son! My son! Do not leave me!”

But his son, with the quickness of a bird, had flown up to the top of the lodge, and perched on the highest pole, a beautiful robin red-breast.  He looked down on his father with pity beaming in his eyes, and told him that he would always love to be near men’s dwellings, that he should always be seen happy and contented by the constant cheerfulness and pleasure he would display, that he would still cheer his father by his songs, which would be some consolation to him for the lost of the glory he had expected, and that although no longer a man, he should ever be the harbinger of peace and joy to the human race.

Jane Johnston Schoolcraft (1800-1842) also known by her Objibwa name, Bamewawagezhikaquay, which is translated as Woman of the Sound the Stars Make Rushing Through the Sky, is recognized as the first Native American literary writer.  The grand-daughter of a noted Ojibwa chieftain, and daughter of a well-educated Irish fur trader, she married the famous explorer and cultural anthropologist Henry Rowe Schoolcraft.  Her heritage and education enabled her to re-tell ancient Ojibwa legends as a fluent speaker of both languages.

A Woman in No Man’s Land: Caroline Henderson, Homesteader