The Healing Properties of Emus 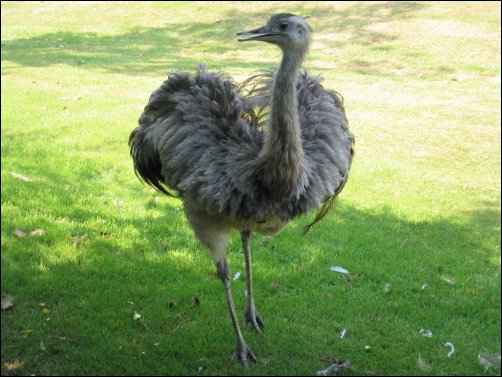 Emus, Ostriches, and Rheas—all flightless “running birds”—belong to the same class: “Aves”.  Emus resemble ostriches somewhat in appearance, but are significantly smaller and more easily managed.  Ostriches have a reputation of aggressive and comparatively difficult manageability.

Emu young are striped, and with a shorter neck than an Ostrich, and most find that Emus are more aesthetically pleasing to the eye.  As well as being more docile, peaceful, and even timid, compared to ostriches, this brown and bluish tinged bird has become increasingly popularized lately for many reasons.

Emus have been taking the exotic world by storm in the last ten years. These exotic birds are native to Australia unlike their African cousins the Ostrich, and their South American counterpart, the Rhea.  But all have in common similar appearances and physiology, and belong to a group known as “Ratites”.

Canadian statistics approximate the numbers of farms currently raising Emus (1996 Agricultural Census first recording Ratites) at 86 registered breeders, with a count of 61,308 birds in total for all of Canada.  Certainly this number has stabilized since 1996, and the continued and growing demand, specifically for Emu-oil products, has established the Emu industry and given it a stronghold, where so many other types of exotic farming have perhaps declined in popularity.

Ratite ranching has become popular in the past few years, where production of red-poultry has been a successful venture all over North America, since the 1970’s.  And although Emu have been successfully raised for meat along with the larger Ostrich, Emu breeders have now discovered what has been known for centuries in the Outback of Australia.  The healing properties of the oil-derivative from the fat of the Emu has become more widely popularized on a global scale for successful treatment of many skin and pain related ailments.  This magical oil has been used for hundreds of years by the Australian Aboriginal people but is a relatively new discovery in the Western world.

Available through health-food stores and online, Emu oil is being reported as having healing properties making many dermatologists and general practitioners take notice.  Containing Vitamin E, which is an anti-oxidant and healing agent, Vitamin A known for its skin repairing qualities, as well as Sapogens for skin softening, and Terpenes for antiseptic healing, Emu oil is being used in the treatment of those with severe burns, skin ailments, Fibromyalgia, and sports injuries and many other countless skin and pain related injuries and diseases.

These reported successes with the use of Emu oil cannot be substantiated by the FDA or endorsed by government agricultural authorities, however, the testimonials and commercial success of the oil being sold for these uses supports the findings of those who’ve discovered first hand the array of benefits from using Emu oil and related products.  Such significant successes have prompted more government research to discover and isolate the active components in Emu oil.

Certainly, the Emu industry is on the incline and is expected to continue in the very near future.  With rising costs of hay and grain for traditional commercial farming, diversification is becoming a necessity to the survival of the family farm.  Finding marketable and quality products that can be produced from a livestock venture is something many farmers are looking into.

But choosing to enter the world of Ratite farming can certainly have its own challenges.  Emus stand fully grown at a height of 6 feet, and a weight of approximately 130 pounds.  Because of their height and the high speed at which they can run, fencing must be six feet in height minimum.

Nesting of the dark green eggs, (incubation takes 2 months) if done naturally, is entirely completed by the male bird.  Most breeders choose to use a mechanical incubator, and fertilized eggs are readily available from most Emu farms for sale for this purpose.  Egg incubation can be a tricky and complicated procedure to the inexperienced, and as the cost of a single Emu egg can be as high as $30 per egg.

However, one of the largest benefits of raising Emus is that a very minimal amount of land is required for their husbandry.  They need no pasture, and housing requirements are minimal.  Emus can and do thrive in colder climates, and if one researches well and does their homework before purchasing breeding stock, a successful venture could very well be on the horizon.

Processing facilities for Emu oil in Canada are rare, and much of the oil is processed in the U.S.  As the fat must be refrigerated during shipping under the rendering process begins, shipping can be quite costly.  There exists a renderer on Vancouver Island  (Canadian Emu Oil Ltd.) as well as in Ontario however.  An adult Emu yields about 4-5 litres of oil dependant of course, on slaughter weight and feed.  Emu oil wholesales for approximately $5 an ounce, CAD.

Both the Ostrich and Emu industries seem to have reached a plateau after many uncertain years of ups and downs, and both have established themselves in terms of longevity and sustainability.

Much useful and excellent information is available online and through print sources such as Critters Magazine out of Alberta, and the Canadian Emu Breeders’ Association, that will aid anyone who is interested in learning more about or venturing into the wonderful world of Emus.

Rabbits, Rabbits Everywhere (And Look at All That Hair!)