It’s hard to know where to begin, to describe a way of life that must be so different to anything the majority of your readers have known.  Let’s start with an overview of the way the livestock industry operates in the arid areas of Western Australia, the state covering the largest area of Australia.

All grazing land in Western Australia is “leased” or rented from the State Government. Lessees are required to look after the land environmentally, control all vermin and pay various rates. In return they have full water and grazing rights. These “pastoral” leases are large-scale farms or ranches, and are called “stations”.  Leases come up for sale on a per head of stock basis e.g. around $55 Australian /sheep or $600/cow, this works out to about 50 cents to $1 per acre USD. 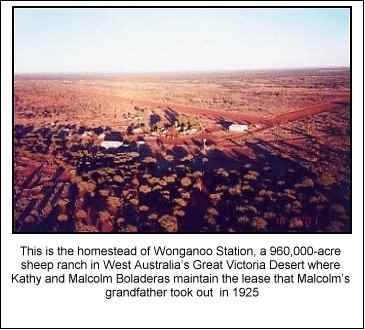 My husband’s grandfather took up the lease on Wonganoo Station in 1925. I have always admired his wife because she was a city girl raised in comfort, and when she came out here, there was nothing but a tin shack with dirt floors to call home.

The family has built up a viable business since then, and living conditions have improved considerably.  We have 24-hour solar power, telephone, fax, and satellite internet access – Gran would truly marvel if she were alive today.

The property covers an area of about 1,500 square miles (960,000 acres – Ed). Such large areas are necessary to carry stock because of the arid environment; it takes about 30 acres to support one sheep and 300 for a cow.  Anything above 8 inches of rain in a year usually constitutes a good season.  When we get less than 4 inches, we must reduce stock numbers and hope for better rainfall in the future.  Most of our rain comes from cyclonic activity during the summer months of December-March.

To get here from Perth, catch a flight to Kalgoorlie, then hire a car and drive north to Leonora (140 miles), and then further north another 140 miles to Wonganoo.  We are 100 miles SE of Wiluna, 130 miles NE of Leinster, and 130 miles SW of Lake Carnegie.

To the east of our property, the Great Victoria Desert stretches out across the continent to the edge of the pastoral country of South Australia.  North of us are all cattle producers, as the dingo populations up there make it too difficult to run sheep.

Actually, for the first time in many years, we have had a serious dingo problem here, where they have bred up in the cattle country and moved down into sheep areas.  In the last 12 months we have lost half our flock, and because we have so many acres and rarely see the sheep anyway, it wasn’t until we mustered them for shearing that we realized the extent of the devastation.  We are down from 8,000 to 4,000 head.  Every lamb was taken, being prime targets for these marauding dogs.

We must now let nature take its course, and allow the flock to build up its numbers again, as sheep prices are too prohibitive at the moment to consider buying more ewes.

Because the nearest service centre is 100 miles away, we must be self-sufficient in power generation, water supply, mechanical repairs and lots of other things.  Recently we took advantage of a government subsidy to encourage alternative power generation, and installed solar panels and batteries.  We now have 24-hour electricity.

A windmill delivers water to the homestead from a bore with a good supply of very soft water, and when the wind doesn’t blow there is a backup electric pump.   Water is fairly deep here at the homestead, about 120 feet, and it’s BEAUTIFUL: great for washing your hair, and delicious to drink. Malcolm (my husband) declares it the best Scotch mixer on the planet.

Being surrounded by red dirt and sparse vegetation, I put a lot of time and energy into maintaining an extensive “green” belt around the buildings. It’s so welcoming to come home to the coolness of shady trees and sweeping lawns when you’ve been out in the dry dusty paddocks all day.  (The rabbits and caterpillars think it’s Christmas all year round.)  The citrus trees go back to Gran’s time, nearly 70 years, and are starting to show their age.  Stone fruit trees (fruit with large pits i.e. peaches nectarines etc. – Ed) usually succumb to termites, but I keep putting them in, and we get a few years out of them.  The soil is magnificent here, as long you can keep the water up to it, you can grow just about anything.

Education: the choices are teaching your children at home, or sending them to a boarding school. The second isn’t really an option, as what family could bear the emotional and financial cost of sending their children away from the age of six?  We felt a big enough wrench having to say goodbye to ours at 13 years of age, when they began high school.   I taught our three youngsters in primary school, and although secondary education was also an option through Distance Education, we realized we would be restricting their potential by not letting them taste the wider world beyond our station boundary.

Correspondence lessons came from the nearest large centre (Kalgoorlie, 280 miles away).  We usually worked to a fairly normal classroom timetable, which included a daily radio lesson lasting 30 minutes for each class.  The “air” lessons gave the children social contact with their teachers and classmates, and a chance for group discussion on various topics.  They also attended school camps during the year for some face-to-face social interaction and participation in team sports.

All three children are now well-adjusted young people either at University or in the workforce.

Distances from everywhere prohibit much traveling.  The nearest doctor is 2 hours away, specialists 5 or 12 hours, depending on the problem.  In emergencies we do have the Flying Doctor, who is just a phone call away for advice, and an hour and a half for evacuation to a medical facility.   We have had a few people flown out over the years, for different reasons.

Once, when he was 14 months old, our son drank kerosene.  The Flying Doctor plane was there within 2 hours, but it felt like a lifetime! Scott was almost unconscious, and we had to try and get some milk into him to protect his stomach lining from the chemical.  Once on the plane, the doctor took charge, and I could worry a little less.  Thankfully, Scott didn’t ingest enough to warrant pumping his stomach out on arrival at the hospital. He made a full recovery.

Another incident involved a worker crashing his motorbike into a tree and inflicting some severe wounds.  His mate brought him in from the paddock and we had to give him a pain-killing injection and clean him up whilst awaiting the plane.

Our community is somewhat fragmented now, with many properties changing hands since my husband and I were children growing up in the area.  We are all that is left of the “old guard”.  There is a different ethos prevailing now, where neighbors seem less willing to hop in and help when a crisis arises.  There is also the fact that it is harder to make a living on stations; there is less time for social interaction because everyone is working longer hours.

We don’t expect Wonganoo Station to stay in the family for a fourth generation, sadly. Our children all have other lives planned.  For now, though, we are making the most of having the biggest backyard in the world.  Gran had it hard, but she grew to love the red dirt and I know just how she felt.

Alpacas: The Ultimate in Exotics
Hens Are Birds, Too