Utilizing Trees on the Homestead: Crafts to Cure-alls 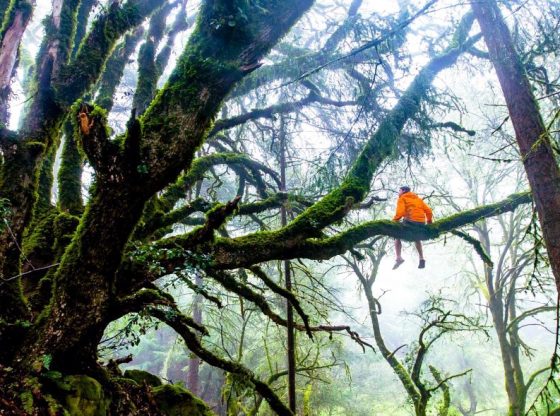 When you become a homesteader, you notice how much nature is willing to give to us in return for our love and care. Any journey towards self-sufficiency reveals this truth. Weeds can be eaten, vines turn to rope, and trees, too, serve a purpose. Sap, needles, leaves, and bark all aid us in one way or another.

Practice sustainable harvesting when taking from a tree, or anywhere for that matter. Never take too much from one area. Never take bark all the way around a tree, or “ring” it. And never cut a tree down to harvest a small amount from it.

The birch tree is easily identified by its light bark, marked with horizontal lines, and toothed leaves. Birch has many uses still standing and was used in old times for birch beer which was derived from the sap of the tree.

Throughout the years, birch has been a part of the medicine cabinet of many cultures. Different parts of the tree were used as an astringent, diuretic, and tonic, as well as other uses. It’s one of the first cure-alls. Due to its astringent properties, it is often used in beauty products of ancient and modern times. There are even accounts of birch bark being softened in water and then molded to a broken arm as a cast. Something to remember!

A decoction from the leaves makes a wonderful tea, useful as a gentle laxative or sleep aid. It can also be used as a wash for skin issues or balding, and birch tree extract is excellent for inflamed joints.

That same bark also makes a wonderful basket. To make this basket, cut a piece of bark from a downed birch tree, large enough to make at least 14, one-foot strips of bark. Let the bark dry after harvesting and then scrape out the remaining inner bark. Mark and cut out one inch wide strips of bark that are at least one foot long. Cut with the grain of the lines on the bark.

Once you have the strips cut out, weave the bottom of the basket in basket weave style. Over, under, over, under. Make sure the bottom is at least 3 strips by 3 strips. It’s easier to weave the larger the basket is. To make the sides of the basket, weave a strip along the sides in the same basket weave pattern, securing with clothespins as needed. At the end of a strip, overlap by at least an inch. Continue until the amount of height desired is reached.

To secure the sides of the basket, take two strips, one placed on the outer side of the last weaved layer, and another on the inside. Weave them in the same matter you did the last layer. However, when a vertical strip overlaps the outside strip, tuck it under the inside strip on the other side and vice versa. Glue down any pieces that broke and leave until dried.

Homestead Uses for Hickory and Walnut

Hickories and walnuts are grouped together because of the similarities in look, use, and the fruits they bear. These two trees are mainly known for the nuts they produce. Hickory nuts and walnuts are packed with calories and nutrients. Their high levels of healthy fats support heart health, as well as being good for digestion and bone health. Walnuts are notorious for the good it does for your brain, but it also used for inflammation and immunity.

Scour the ground beneath these trees for walnuts and hickory nuts, but make sure there are no signs of visible rot or maggot holes. To test if they’ve gone bad, throw the husked shells in a bucket of water and keep only the ones that float. When picking walnuts, look for softer ones that have already fallen.

Both hickory nuts and black walnuts have a soft outer shell and a hard inner shell. The outer shell of the hickory nut can be removed by simply peeling away the husk to reveal the harder shell. This has to be cracked with a nutcracker or smashed with a hammer to reach the nutmeat. Once the nut meat is picked out, soak it in salted water for a few days or weeks to remove the bitter tannins. The salt is a must! I’ve learned this the hard way, as I threw some walnuts that weren’t leeched with salt into some stuffing and was met with a rather unpleasant outcome.

The walnut has a more tedious preparation and more to clean up. The process I have is to step on the nut (with boots on) to remove the outer shell which I place into a trash bag. The inner shell goes into a bucket of water where I’ll rub off the remaining husk. They’re left to dry on a covered and well-vented surface outside; I place them on a window screen. After curing, crack them open in the same matter as the hickory nut, and leech the tannins from them in the same way as well.

When disposing of walnut husks, make sure they are not put into a compost pile or dumped in the water; it’s best to throw it in the trash or back where you got it from. The substance, juglone, that’s in walnut husks can kill some plants, as well as aquatic life. Native tribes would take advantage of this by placing walnut husks in the water to kill fish for consumption. This practice is outlawed now except for in cases of survival.

From an enterprising perspective, these trees can make a large profit between the nut meat, husks, and shells. The nuts, like black walnuts, can, of course, be sold for consumption, but the husks and shells, once dried, can be made into fine jewelry with a little imagination. I made a necklace as a gift for my brother from dried and drilled husks and shells, along with a few beads.

Reminiscent of Christmas mornings and chilly winter days, these trees remain in our winter memories as strongly as they should in our everyday life.

Pine needles are a nutritional powerhouse, containing high levels of vitamins A and C, making it an ideal immune booster, as well as a must for circulatory and respiratory issues. Pine trees can also be used as an antiseptic, taking internally, or as an external wash or poultice. A fountain of youth in their own right, the high levels of carotenoids, which are powerful antioxidants, help slow the effects of aging. These antioxidants strengthen your vision, smooths skin, and shines hair.

In terms of edibility, the pine tree can be used from top to bottom; pine nuts, cones, bark, pollen, and needles can all be consumed. Native Americans of the great basin area regularly consumed pine nuts as a staple part of their diet due to its high nutrient content and filling fats and protein.

Pine pollen can be harvested from new cones during spring and can be used as a thickener, or like breadcrumbs and flour. The inner and outer bark are also edible, although the inner bark is much more palatable. To harvest the inner bark, simply cut a small piece out of the tree and scrape out the inner bark. It can be eaten raw but it’s much more preferable to eat it boiled or fried, or turned into a flour. Nordic cultures actually used to consume the other bark, pounded into flour and baked into a cracker. However, due to the taste, this should mainly be for desperate survival.

Pine needle tea is also something that has remained from ancient cultures. Its pleasant woodsy taste and smell are enough to give it a try. All you have to do is pick some pine needles, and allow them to steep in hot water before taking a sip. It’s a personal decision, but I like to chew on the softened needles after the tea is all gone.

A common bushcraft use of pine trees is to take the pine pitch; pitch is the sap from the trees. Pitch collects at the wounds of the tree and forms into a hard, resinous substance. Collected, it can be reheated to be used as a sturdy glue. Or, if you’re wounded in the forest, far from help, a small cut into a pine tree will quickly fill with sap. Apply this to the wound as a sealant.

It’s important to make sure you’re identifying the tree correctly, as with any other foraged foods. Familiarize yourself with the poisonous yew tree, ponderosa pine, and the Norfolk Island Pine, to make sure you aren’t accidentally harvesting from these trees.

The tree of life is a common symbol in our lives. It represents longevity and growth, connection and knowledge, and therein lies the truth of all the trees surrounding us. Vessels of health and utility, they shade us from the sun and nourish the soil beneath our feet. So become a tree hugger! Appreciate and utilize all that readily surrounds us.