Why I’m a Homesteader (The Secrets of Homesteading) 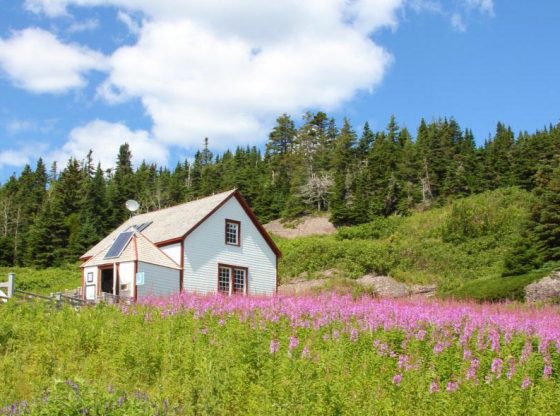 There is an imaginary picture of “Homesteading” that revolves around being entirely self-sufficient from your land. Chickens for eggs, goats for milk, making your own hand lotion from goats milk and beeswax, pumping water from a well, living on solar electricity, etc.

If you look at magazines like New Pioneer you certainly get that idea.  That idea might be why some people read Homestead.org. “Back to the land” on a “10-acre farm of your dreams” with “solar power.”

I’ve done it all!  I have solar on a 10-acre farm of my dreams with gardening, chickens, rabbits for meat. We have had (and milked) goats… we don’t have any at the moment.

Homesteading is a lifestyle of self-sufficiency. It is characterized by subsistence agriculture, home preservation of food, and may also involve the small-scale production of textiles, clothing, and craftwork for household use or sale. Pursued in different ways around the world—and in different historical eras—homesteading is generally differentiated from rural village or commune living by isolation (either socially or physically) of the homestead. (Wikipedia)

So, What Makes a Homestead?

This definition is the current definition based on a historic definition. I think it’s mostly valid except for the fact that it leaves out the Need for Money. Even historic homesteaders needed money. They needed money for fabric, tools, food they could not grow themselves, and “modern” needs—whether that’s clothes for church or a washing machine or electricity.

Today, we have lots of needs for money.

So, What Makes a Modern Homestead?

It does take money.  How can we make money and still be a homestead? The answer is small-scale, family-based production of goods or services.  In our case, we train dogs. I’m a dog trainer, my wife is a dog trainer, my adult son is a dog trainer with his wife as well.  The whole family lives on the homestead, including my 4-year-old grandson.

Other homesteaders use other sources of money: retirement, investments, or even some sort of job. I think our homestead is really a homestead because, we, as a family unit, create 100% of our income without any external factors that can interfere (company, boss, supervisor, etc.). No one can fire us. We created our own income based on our own skills.

Once we realize that a homestead does need money, then the question becomes how will that money be made on a homestead.  Lots of people imagine the old idea of selling eggs or chickens or green beans.  A world where Walmart exists is a world where food is produced at the lowest possible production price in the lowest possible production area in the world. This food production is based on capital expenditures and debt that is incomprehensible.

For instance, chicken in America is made by agribusinesses that operate on millions of dollars in loans that support everyone from the major corporation (Tyson or Pilgram’s Pride) to the farmer (who have dozens of giant, industrial chicken-raising buildings) to the distributors and sellers (Walmart). I cannot raise a chick into a chicken for what it costs to go buy chicken from Walmart. Chickens don’t grow for free, they need feed… at least if you want to eat them.

So it’s okay to not make a homestead living from chickens and eggs. But there is a difference between being a “homesteader” and being a person who “lives on some land.” One big difference is debt. If you have to carry a lot of debt (I would say any), then homesteading isn’t really homesteading.  If the banks own your land and your car and your furniture and last week’s lunch—because of mortgages, car loans, store credit, and credit cards—then you have no independence. Credit destroys any illusion of real self-sufficiency.

So, a basic idea of homesteading is to have a fairly independent income that supports a lifestyle that is resource based, not debt based.

Subsistence Agriculture on the Homestead

What can you grow that you will eat?  In my case, the answer is: some vegetables, plus chicken, eggs, and meat rabbits. The vegetables I grow are mostly beans, corn, green beans, peas, and cucumbers. This is supplemented with tomatoes, peppers, melons, and some herbs. I don’t grow my own wheat or grind my own flour.  I don’t grow rice or other grains either.  It is much easier to simply buy a bag of rice from Walmart.  There is no need to grow everything I eat in order to be a homesteader.  No modern homesteader ever has grown 100% of their own food.

Canning and preserving are certainly a big part of self-sufficiency.  I don’t raise all my own meat, but I do enjoy canning meat so I always have a large stockpile.  The same can be true of other foods.

This year I will be adding crawfish to my subsistence agriculture.  I’m looking forward to it!

Small Scale Production on the Homestead

The main product that supports our homestead is dog training, in particular, boarding and training.  In this way, we use the land, the distance from neighbors, and the lack of codes to our advantage.  In the city, a dog-training facility would be expensive; it would need staff, capital, etc.  By using our homestead, and our cars to pick up and deliver dogs to the “training facility”, we can provide boarding and training at a lower cost to the customer, a higher profit to us, and without any need for capital, loans, or employees outside the family.

We have also sold art, agricultural products, rented our tractor, and done some other small-scale homestead things. But none of them provide anything other than a sporadic pittance of income.

Homesteading as a Family-Based Economic Unit

The big thing for me is creating a lifestyle with family at the center.  I understand why society and capitalism are the way they are, but I feel like it has devolved into strangers exploiting strangers on behalf of strangers. There is no loyalty to employees, customers, companies, ideas, values or anything else.  It’s just money, right now, today, period.

I have participated.  After serving as a Combat Engineer in the U.S. Army, I went to college for a divinity degree and (after a year in the ministry) ended up in a corporation where I went from receptionist to Vice President in seven years.  So I have done all aspects: public service, religious service, capitalist service. None of those hold a candle to working for, and with, your own family.

When I moved onto the homestead, the idea was to make a “100-year resource” for my family.  I honestly didn’t expect my adult children to live here while we were still pre-geriatric.  But my son’s family (him, his wife, and their 4-year-old) took up dog training three years ago and moved onto the homestead in October of 2018.  It’s great!

The final idea of homesteading is “isolation.” I don’t know if super-social people would ever consider moving to the end of a dirt road in the country.  Homesteading probably pre-filters for people who like the idea of isolation, peace, being left alone. My wife and I certainly do.

So, Why Am I A Homesteader?

Everything above is what a homestead is… not why.

I’m a homesteader because I’m a prepper.  I don’t trust that everything will be OK for the rest of my life with society. I’m probably wrong, but I don’t trust it.  I would rather have some of my own stuff, emergency food storage, space, security, and healthcare. For me, not having houses on every side of me while I’m jammed into some suburban neighborhood is a big part of prepping. Another is having food “on the hoof” so to speak—live animals I can eat.

I’m a homesteader because I’m a contrarian by nature. If everyone is doing “A” then I try to find a way to do ”Kaleidoscope”.  I not only want to do something different, but I also want to be in an entirely different category.  To me, that is the ultimate security.  If everything in society and life goes as planned then it’s no difference to me.  Homesteading is a fun adventure that has no major downside compared to a “normal life.” If, however, the usual way of doing things falls apart entirely, then I’m not part of the chaos. That’s my thinking, at least.

We had more stuff, more obligations, and more debt.  In order to rectify that, we went to a lifestyle that had less stuff and the stuff we had was less valuable.  My 10-acre farm is only worth 1/4th of what my suburban house was worth. The cars we drive are worth 1/8th of what the cars we drove in the big city were worth.  As a consequence, we have NO DEBT. We own everything that we have. No one can take what we own.

That’s why I chose to homestead over living a “normal life.” It takes years to work through some of the fantasy aspects of homesteading, but even that process is fun.  At this point, we are closing in on eight years. I’ll be fifty years old next month.  I’m very happy with the choice we made eight years ago to become “homesteaders.” The fact that my son and his family chose to join us makes it even better.   I look forward to the next eight years and to the eight after that!

Based on all of that, what is most vital for success?

What are the Secrets of Homesteading?

Homesteading is not only a willingness to live hand-to-mouth, but it’s also a desire to do so.  But it only works if no one can come take your home from you.  That doesn’t mean you have to buy your place outright.  But have a plan to pay it off very quickly.  I paid my land off in five years. I couldn’t afford to pay for it with cash.  I didn’t consider myself “self-sufficient” until the land was paid off.

It’s pretty much impossible to find a truly isolated homestead. That means all the conveniences and pitfalls of “regular” life are nearby.  When you need wood for a project, having Home Depot thirty minutes away is great, but next door to Home Depot is Appleby’s. If you spend $400 per month eating out, it’s not really homesteading, is it?

If you do homestead… Enjoy!