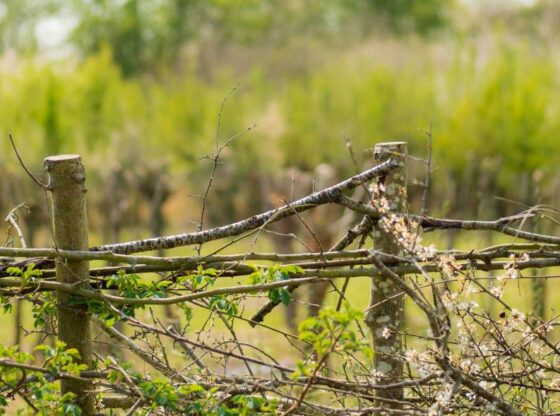 The very nature of living on a homestead is such that it generally involves living in isolated, rural environments. Many active homesteaders are single individuals or young families seeking to build a more natural and wholesome life. While homesteading life is statistically safer than living in urban population centers, there are still concerns about homestead security. Still, who wants to live in a prison to remain safe?

Did you know that there are natural resources that are available and can provide beautiful surroundings while, at the same time, creating a very safe and secure perimeter to protect the homestead from both four-legged and two-legged varmints? Defensive measures for the homestead can be both effective and beautiful at the same time.

Berries and Briar Patches for Perimeter Security on the Homestead

A range of berries that grow on thorn-bearing bushes can be planted densely without impeding growth or production. Berry patches are among the most popular choices as the berries can be used to make many desired items, among them being brandy that works well as a solvent and for cleansing wounds, or even to relax after a long day of work.

For those that may not want berries or who live in areas where berry brambles may not grow so well, other thorn-bearing plants can be grown just as densely and which will serve the same purpose. Pomelo trees can be used, replete with inch-long thorns prevalent on both the boughs and the branches.

The ground should be tilled and enriched before planting, and a layer of pea gravel used to cover the ground once growth has commenced. In terms of defensive measures for a homestead setting, the thorns will create a great deal of grief for anyone forced to pass through and the crunching gravel will give additional warning as to the presence of unwanted intruders encroaching on the property.

The ideal setting for the use of tightly-packed berry bushes around the perimeter would include two rows, one on either side of a deep, sharply-inclined perimeter ditch. The areas surrounding buildings should include a single row of thick berry bushes edging right up to the buildings being protected.

Care needs to be taken if you are considering ditches, as people have been jailed or had their property declared as “wetlands” under the Endangered Species Act for digging ditches or retaining ponds on their private property. It is always important to know and follow all of the relevant regulations when making any changes to your property.

As was noted before, ditches can be an effective part of security, though still serving as a means to avoid flooding, for irrigation of yards and gardens, and even to house fish if so desired.

Bluegill and tilapia both tend to fare well living in irrigation ditches if there is a desire to have a fresh supply of fish without ever needing to leave home. Fish ponds that effectively serve as moats are not without precedent. Ditches or swales are also an ideal solution if there are any intentions to build a food forest on the homestead.

Defensive ditches should be wide enough that the average person cannot jump across them, the possible exception being ditches that are well situated between two berry patch “hedgerows” around the perimeter. The ditches should be four to five feet (around one and one-half meters) deep, with steep sides.

These steep sides should have a covering that includes sharp, natural rocks like obsidian, shale, slate, or flint. The idea being that anyone who passes through is forced to scale sharp, dangerous rocks and has a difficult time getting through unscathed. Large pieces of rock are fine, and they may need to be physically embedded along the sides of the ditches. They should be placed in such a way as to ensure that any intruders will get the point and understand they are not welcome.

Driveways, paths, and other areas should be covered in pea gravel. The smaller gravel tends to crunch more whether a deer or a man is walking through the area. The paths should again be wide enough that they cannot be circumvented. This should include paths between all of the outbuildings and any paths along the outer areas, closer to the perimeters.

Enjoying the Benefit of Bees on the Homestead

Bees are an excellent option for homestead security, though care should be taken to ensure that nobody living on the property is allergic to bees. Caring for the bees will also take some work, though the rewards tend to make this a worthwhile effort. It is also possible to build homemade beehives and to attract wild bees during a swarm, making this a very cost-effective property security option.

Beeswax is an excellent means of waterproofing cloth, protecting leather, sealing mason jars, and making many household goods. Honey can be used out of the hives or further processed to make everything from candy to mead. Honey and beeswax can also be sold at local markets and used to supplement income.

Bees do tend to be defensive in nature, and the strategic placement of hives around buildings, in combination with the presence of the berry patches, can dissuade unwanted visitors from coming too close. The errant slapping of a single bee can put a hive into a swarm and would almost certainly drive any intruder into the watery ditch, which again, should have an equally undesirable outcome.

What are the Best Dog Breeds for the Homestead

Some people are under the impression that country life means having the largest, most aggressive dog breeds running around their property will afford them the best protection. Reality, however, tells a very different story. There are no “best dog breeds” for rural living. The ideal solution is actually a selection of two or more dogs.

The more aggressive dog breeds have the capacity to create more problems than they will resolve in rural settings. Since many rural dogs will be largely kept outside, this must be a consideration. Dogs that get a taste of live chickens, or even deer and other game animals, used to be put down immediately, as once they developed such habits, they were difficult to break.

Australian shepherds and Labradors both tend to do very well as outdoor dogs. Their intelligence also tends to ensure that they will not randomly attack virtually anything or anyone entering the property. It should be remembered also that dogs are pack animals, and will require at least some attention and care.

The value of the proverbial ankle-biters should not be entirely dismissed either. While these dogs may take a little bit longer to adjust to all the sounds and subsequently quit yapping every time a breeze goes by, they still serve a purpose. Anybody crunching through the thorn-ridden, gravel-covered path along the outside of the buildings would encourage these small dogs to make enough noise to roust even the heartiest of sleepers.

Snakes, rats, and a host of other vermin are a danger to homesteaders in isolated locations. If Fluffy is an indoor cat who has been declawed and never stepped foot outside of the house, chances are pretty good that now is not the best time to let her outside to see what happens next. That being said, cats play an important role in keeping the homestead and food supplies safe and secure.

As a rule, two cats per building will be sufficient to keep most of the rodents out. Local shelters may be willing to help if they know that a good home is available for their more feral feline finds. Setting up a sheltered “house” in a corner of these buildings, with a bowl of fresh milk waiting should convince most of the feral cats to stay close when they realize that there is a ready supply of food.

Construction and Design for Homestead Security

The outer perimeter has already been described in some detail. Forested areas should be included just inside the perimeter, though it is understood that there will be some variance based on the landscape.

The outer edge of the property, just inside the berry and thorn-laden hedgerows, is an ideal location for the placement of even smaller food forests, and the water from the perimeter ditch should be sufficient to allow the food forests to remain largely maintenance-free. The outer edge is also an ideal location for other dense wooded areas that can be used as wind blocks and for screening the living area.

The housing and any outbuildings that contain items of value, such as machine shops and barns, should all be centrally located in an open area towards the middle of the property. The open area should be sufficiently large to prevent most, though the exact size will vary by necessity. The area surrounding the home and outbuilding can also be further secured with the installation of hard breaks.

There should be at least one gravel path that surrounds the home and the outbuildings completely. A wide enough gravel path will reinforce the firebreak and notify the homeowners any time an intruder is about.

A “moat” or “koi pond” running along the interior of the main, surrounding, gravel path adds a potential food source closer to the home, provides water for fighting fires, and further inhibits unwanted intruders to the homestead.

It may or may not be that the home itself will be built on top of a cellar or basement. If this is the case, the basement roof/floor of the house should be elevated roughly one yard or one meter above the level of the ground. Even in cases where a basement is not possible, it remains preferential to build an elevated home for the living quarters.

This will serve to elevate the floor, leaving the windows and other access points higher up and more difficult for intruders to reach. If you add up the dense thorns around the house, the bees seeking out berries and flowers, the gravel below the thorns, and the higher windows, together, they make the home much more secure from bears and other curious critters, while at the same time affording a much better view for the homeowners.

Granted, raised floors may not be practical for barns or machine shops, but if it is possible, they should be raised similarly to the home. For the barn or other storage areas, elevated windows will work, even if the flooring remains largely at ground level. Work areas can be built in front of these windows to allow the homesteader to keep an eye on what is going on outside while they work, at the same time creating difficult obstacles for intruders, especially at night.

While there is no real way to make a homestead completely safe and secure, there remain many natural methods for homestead defense that are both beautiful and practical. The ability to stay safe and enjoy a better quality of life all while supplementing income when living on an isolated, rural property can make homestead security a joy to work with, and one that can continue being enjoyed for generations to come.

A Natural, Non-toxic Clean for Your Whole Homestead
A Summer of Hot Inflation on the Homestead