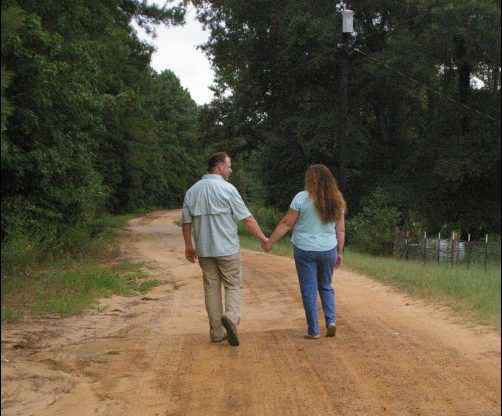 “There’s no way this car will make it the rest of the way home in the dark. The alternator belt is gone,” I said.

My wife, Donna, replied, “I know.  What are we going to do with the kids?”

We were standing in the parking lot of a closed store about an hour after sunset.  We had two children, ages 4 and 10, fidgeting in the back of our old car with faded paint.  We had $8 in cash and there were no open ATMs in the small East Texas town where we were stranded.

The car could run, but without an alternator belt, it wouldn’t make the two-hour drive back to Dallas in the dark.  We had a little money in the bank, but the only store in town with an ATM sign was closed.  So there we stood in the parking lot.  Since it was Sunday in a small town, everything was closed.

That morning, my wife of five years and I had said at the same time, “Let’s go for a drive in the country!”  We had enough cash for a tank and a half of gas, and about $100 in the bank.  The year was 1994.  I guess we were poor, but mostly we were fearless.  Yes, the car’s AC didn’t work and the old car wouldn’t go in reverse sometimes, so we always parked it so we could go forward when we had to leave.  But what else were we going to do on a sunny Sunday?

When I got out of the Army, Donna and I moved to the Dallas area to go to school and find work.  After no more than three weeks we were already finding excuses to run away to “the country” to see some trees, dip our feet in a lake, drive past dusty, yellow-dirt roads and wonder, “What it’s like to live down there?”

We were fascinated with the land.  We loved the tall trees in east Texas.  We calculated that it was exactly one hour’s drive from Dallas before we would see the first line of “real” trees; tall trees, big pine trees that bordered the black ribbon of asphalt.  At regular intervals, we would speed past fields and pastures.  “Cow!” everyone would scream upon seeing a cow.  Heaven forbid when we saw a herd.  All four of us would be yelling “Cow, cow, cow, cow, cow…” for every cow we saw.  We sounded like a flock of crows.

My six-year-old son called it, “The Jungle.”  “Can I go in the jungle?” he would ask.  Sometimes he could.  Mostly, just behind the first line of trees alongside the road was a four-strand barbwire fence.  “Private property.”  No exploring there.

We found a hotel that night when we were stranded.  They didn’t accept checks, but for a stranded young family with two small children, they made an exception.  We got a room with a couple of queen-sized beds.  More importantly, we had “the jungle” for my son.  Behind the roadside hotel were four acres of thick pine trees with no fence.  He walked into the darkest part of it, certain he would find a tiger or a giraffe.  Our footsteps were silent on the thick carpet of pine needles.  We all stood there with him, breathing in the cool, moist, pine air.

The next day we made it home, fixed the car, and worked for a month to make up the lost bill-money from having to get a hotel room for one night and buying an alternator belt.  At that time, $100 was a rare commodity.

Fast forward to fifteen years later… the year is 2010.  The five-year-old and his older sister had finished school and moved out.  Our youngest daughter, who we had after our “jungle” excursion was now thirteen and about to start high school.

Donna and I had accomplished many of our career goals.  We both had successful corporate careers in the Dallas area.  We now had new cars and a nice house with an in-ground swimming pool in the backyard.  We could afford vacations and generally ate out instead of cooking.  We had everything that young couple in the parking lot could have hoped for… except…

Our relationship was falling apart.  Like many couples we had each focused on our career for the past fifteen years.  The children were the glue, the shared project, that held us to each other.  With only one child left, about to start high school, I knew that if we didn’t find a way to reconnect, our marriage would disintegrate.

Summer 2011, found Donna and me driving back into the woods together again, this time with a mission to find a homestead in East Texas.  We tromped through fields, cut through brier patches with a machete, found hidden springs, and ate sandwiches among dragonfly ponds.

My mother had a saying when I was growing up, “Everything will be different by Halloween.”  By Halloween, we had found our ten-acre homestead in the woods of East Texas and moved ourselves and our daughter (who was now a freshman in high school).  We sold our house in the city along with everything that we didn’t absolutely need and bought our ten acres that had fencing, a goat shed, and a used mobile home for just $50,000.

We were broke again!  We were completely out of our element.  But, we were home.  Most importantly, we were doing it together.  Our plan was to board and train dogs on our farm.  We are experienced dog trainers, but we had no money left and no facilities.  We spent the next month literally chopping down trees to create a “dog corral” and scrounging up wood to convert the goat shed into a dog kennel.  By Thanksgiving, we had a few client dogs on the farm.

We didn’t argue while we were lashing together the dog corral with cut down pine trees and binder’s twine.  We depended on each other as we dug trenches to run water lines and watched out for copperhead snakes.

Almost everything we did on the homestead that first year, we did wrong, we did poorly, or it didn’t work out as expected.  The one thing we didn’t do wrong was moving out to the middle of nowhere to reacquaint ourselves with each other.

We didn’t have any money to go out to eat, so we cooked together.  We didn’t have any money to spend on outside entertainment, so we entertained each other.  We didn’t know it at the time, but our daughter was going to need special care during her high school years.  The homestead allowed us to do that for her.  Because instead of being scattered at different jobs, driving an hour each way to work in traffic, coming home frazzled and exhausted, we were home with each other.

We’ve lived together on the homestead four years now.  Donna and I have built our homestead into a peaceful little corner of the world with a small dog-boarding and training business.  We have a rabbit house where we raise and sell meat-rabbits.  We have a chicken house were our chickens lay eggs which Donna incubates into new chicks for locals to buy.

Every morning we milk the goats, sometimes together.  The milking is always a point of interest, “How much milk did you get?” or “This morning I saw a snake.”  The activities of the homestead give us projects to work on together.  The projects matter.  They have to get done or animals will have no home, chicks will freeze to death, and nature will overrun our little oasis.  These projects are the golden thread that binds us together.

What the homestead taught us about our relationship is that we need things to focus on together.  When a couple is young their shared focus is simply living.  They have to create an existence, find jobs, get a house, and have babies.  Once the first baby arrives the couple must support and nourish life together.  This is the most compelling project you can share.  Babies become children with all their individual needs and issues.  Before long, we spent most of our time driving kids to various activities, attending school functions, and dealing with childhood illnesses.

When a couple has more than one child, this process lasts a good twenty years or more.  At the same time, my wife and I were pursuing careers.  As we got older, we got new responsibilities at work and our career demands increased.  Our spending and debt increased with our income.  One fed the other and the other demanded more of the first.

This is the cycle of many marriages.  After twenty years the youngest child goes to high school with their own car, or off to college, and you two are left in the proverbial “empty nest.”  It’s not uncommon for a career to take a hard left turn around this time as well.  Then there’s the inevitable “mid-life crisis,”  when you start asking, “Is this all there is?  Am I going to spend the rest of my life just doing this over and over again?”

These are the sorts of things that slowly break down marriages.  Nothing is wrong in particular, but nothing feels quite right.  Lots of our friends got divorced after the youngest left the house.  They looked at each other and thought, “We don’t really have anything in common anymore.”  The reality is that they just ran out of important shared projects.

Donna and I didn’t want that to happen to us.  That’s one of the reasons we chose to create a homestead.  Of course, there were others as well.  We wanted the adventure, the freedom, the connection to nature and to create an alternative retirement plan for ourselves; a retirement plan that revolved around resources instead of money.

By focusing on creating a new, shared, compelling vision, we reignited our dependence on each other, our belief in each other, and the adventure gets us up in the morning.  Without a shared vision, relationships can wither.  Without shared projects, relationships can dry out.  We felt that happening to us, so we used our homestead to recharge our juices.  We couldn’t be happier about our decision.

Homesteading saved my marriage.  The lessons we learned together even became a book, What Color is Your Relationship?  It’s on Amazon.

I know for a fact that if it weren’t for us moving out to the homestead and starting over again that we would no longer be together.  That would be a terrible thing!  I don’t know if we’re any good at raising bees (they all flew off), or growing potatoes (the bugs ate them down to the ground).  What I do know is that failing at something together is more powerful for a relationship than wildly succeeding apart.

We finally know what it’s like to live at the end of a dusty, yellow-dirt road in East Texas… Heaven.

High Tunnel On The Homestead
Grub in a Tub: Container Gardening on the Homestead