Living to Tell the Homesteading Tale 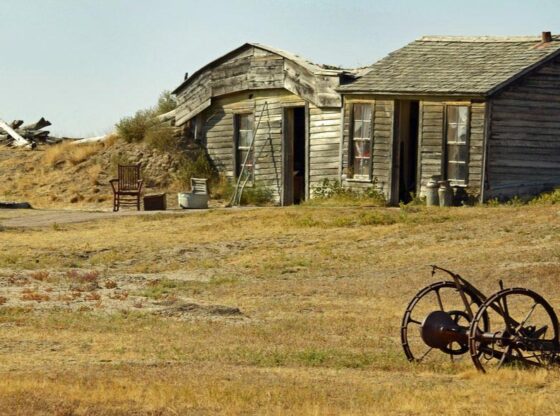 Life is full of surprises, and few people would have known that better than the Americans who participated in the land rushes and homestead movements of the late-1800s-early-1900s: our last major wave of pioneers. And in that group, few had quite as many surprises, or articulated them as well, as Edith Eudora Ammons Kohl. From her semi-fictional account, Land of the Burnt Thigh, first published in 1938, you can learn the truth behind some of the more romantic myths of down-in-the-dirt hard-scrabble homesteading.

Edith Ammons and her sister Ida Mary were half-orphaned when their mother died and their father remarried, so they became independent and strongly bonded to each other by the time they were in their early twenties in Illinois. Since home life was unsteady and finances uncertain, they hopped on the homesteading bandwagon, despite being, Edith observed, “wholly unfit for the frontier.”

Edith, the elder of the two, had been suffering bouts of poor health, and neither of them had any money. To make a homestead claim cost upwards of $2,000, and that included nothing but the raw land. But they lucked into a 160-acre claim (click here for a map) in the totally unknown, wide-open state of South Dakota that had one great attraction: it had a house already built.

The book opens when the two sisters, Edith still recuperating from a bout of illness on the long journey, arrive in a bumpy wagon to a land of seeming desolation; the French settlers had named it Brulé, a discouraging indication of a long-gone, fire-eaten forest. The local Indians had a similarly demeaning, equally realistic, phrase to describe it: Land of the Burnt Thigh. The first sight of the sisters’ hoped-for “house” was enough to nearly consume all their girlish hopes for a new life. It appeared, Edith recalls, “like a large but none too substantial packing-box tossed on the prairie which crept in at its very door.”

The waggoneer helped them unload their few possessions and headed back to town, leaving them to encroaching darkness. There was nothing to do but be there, and so they settled in for the first night of many to come, fortunately finding a few matches tucked away to light the few lanterns they had thought to bring. They would later learn that the young man who threw the shack together left after only a few weeks—a not-atypical reaction to the rigors of prairie subsistence.

But the Ammons sisters would survive and make a new life, as he had not. It began by meeting neighbors who were charmed to see and assist them, even to sharing water until other arrangements could be made. For now, most homesteaders including their new friends agreed it was easier to haul water in from Pierre, about thirty miles away, than to take time out of other chores to dig a well.

On their second evening in the shack, they sat outside and saw some unusual dogs; at first curious, they soon realized to their horror that these were actually wolves! Told by neighbors that wolves only came around when they were hungry, they quickly shut themselves indoors. On later nights, they would be treated to serenades of eerie coyote howls.

Edith and Ida Mary soon discovered other single women living nearby, like the Widow Fergus, who taught them a valuable lesson with her stalwart attitude: “There was no time to get homesick.” That was certainly true, as the girl patched the walls, tried their hand at planting, made makeshift pillows, and began to feel genuinely “at home.” But they were running out of money and soon became experts at eating a bit of flour fried in water and bacon grease. One day they came home after a heavy rain to find the shack infested with worms—they were everywhere and there was no means of getting rid of them. Then, as quickly as they had arrived, the worms disappeared, never to be seen again.

The money crunch was alleviated when it was learned that Ida Mary had been a schoolteacher back east.  To help her begin her tenure in the prairie, neighbors came and hauled their shack to a position near the schoolhouse, located at the far side of their claim. Men tied the rickety structure to stakes set in the ground. Luckily, Ida Mary turned out to be quite adept at teaching and controlling the rather rowdy boys that attended the school.

Then came Edith’s chance to earn some money: a woman who had been running the print shop in the tiny nearby town of McClure left in a whirl and offered the enterprise to Edith, who admittedly knew “as much about running a newspaper as a hog knows about Sunday.” The departing owner gave her a quick course in typesetting and connected her with the local paper’s publisher, a man with whom she corresponded by letter. She demanded $10 a week for the work, $2 more than her predecessor had earned; her new boss awarded her the raise based on her “nerve” in asking for it. Thus was Edith reborn as a businesswoman, writer, publisher, and newshound for the region, which included a portion of an Indian reservation.

At the same time, she and Ida Mary continued efforts to grow anything at all on their homestead claim and live in minimal comfort. Parties with the neighbors helped. But adapting was always a challenge. They had been warned that if they saw a snowstorm on the horizon, they must seek cover immediately. How true that turned out to be! Their first blizzard came on so quickly that only a few minutes after they made it back to the shack, snow was piled up to the windowsills, and it came into the shack no matter how much they tried to fill all the holes in the inferior lumber of the old place.

As operator of the local newspaper, Edith began to see money trickling in—pennies, but they added up. Eventually, people wanted to trade things for papers and this led to the sisters adding a wing to their dwelling that would serve as a general store, run by a female homesteader of their acquaintance.

Through the news business and the store came other unique opportunities. They began to meet and trade with local Indians, some of whom (mostly men) had been off the reservation for schooling, spoke a little English, and had a certain respect for White people’s ways. They too wanted the few provisions offered at the little store. They traded fence posts (the sisters used some once during another desperate blizzard night) and horses, opening the way for yet another entrepreneurial possibility for the sisters. And as Edith recalls, when the area was hit by a destructive drought and potential famine, the Indians, whose tribal ways had been scorned and discouraged by their White conquerors, staged a huge rain dance. Not long after, water began to tinkle from the heavens. Prayers answered.

The working of the newspaper led to the establishment of a post office in McClure, with Edith as the mainspring. It’s clear that she now recognized her destiny as a manager, writer, and—judging by this book and several others penned by her—amateur homestead historian. Land of the Burnt Thigh is filled with accounts of land grabs, low motivations (greedy speculators) and high hopes (immigrants and others who truly sought to make the American dream a reality on the plains and prairies).

By the end of Kohl’s saga, Ida Mary is married, and Edith is heading farther west to Wyoming, taking her printing and journalistic skills with her. It was her choice, leading to further accomplishments: as described by her nephew in later years, she became “a feature writer for the Denver Post from 1929 until 1954.” She established U.S. Post Offices elsewhere once she left the Brulé, and initiated press and publishing endeavors wherever she stayed. With her perspicacious way with words and her contact with the many strata of local cultures, she also became a negotiator, “settling several serious disputes among cattlemen, farmers, and American Indians.”

So, there we have it: a little-known tale, deserving of retelling this March (Women’s History Month) of a feisty, indomitable woman who let nothing hold her back from accomplishing meaningful goals. And it all started on the lonely plains, in an unforgiving, unpredictable clime, battling illness, poverty, realistic fear and rank confusion. As she sets out for her new westward adventures, Kohl states, “I was going empty-handed, with no fixed program or goal.” But it would be all right, she knew, as she took one last look at the Land of the Burnt Thigh; “A wilderness I had found it, a thriving community I left it.”

Time to head out.

Note: Land of the Burnt Thigh and other works on westward adventure and settlement by Edith Eudora Kohl can be accessed online. She was born in 1979 in Illinois, married Aaron Kohl, had one son who died shortly after birth, and passed away in 1959, in Denver, Colorado, aged 80.