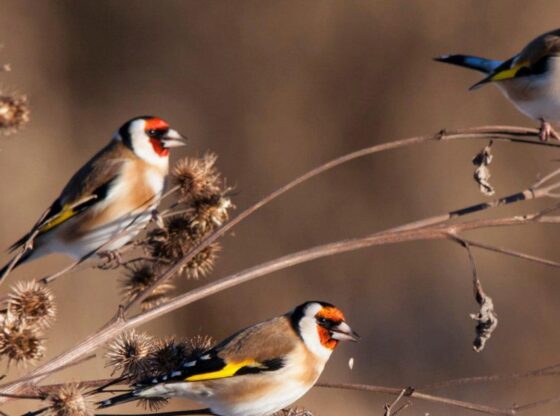 Once the last blazing maple leaf has floated to the ground and before the first blossoms of spring burst forth with their renewing life, what’s left to capture our interest or engage our imagination? As winter approaches and the days turn colder, the landscape can become dreary, but on bright, fresh mornings when frost is still on the ground, the fields and woodland edges are transformed into a botanical realm of pods, papery seed cases, cones, burrs, and other seed heads dancing in the wind. Even when dormant, summer’s fading remnants can add structural interest to the harsh landscape, while also providing food and shelter for wildlife.

Many gardeners like to clean up their perennial beds in the fall when the herbaceous plants have stopped blooming. When they do that, though, they not only deprive wildlife of needed food, they are eliminating one of the great joys of the winter landscape. Often etched with frost or outlined in a casing of ice, the intricate remnants of last year’s blossoms and the buds of next year’s growth reflect both the bittersweet poignancy and the promise that are central to gardening.

Following is a sampling of native perennials whose seed heads add a touch of art and beauty to the winter landscape, while also providing a bounty of food for wildlife at exactly the time they need it the most.

Milkweed is a widespread and somewhat weedy wildflower found in most of the eastern United States and the easternmost prairie states, as well as southern Canada from New Brunswick to Saskatchewan. Frequently found in fence rows, fields and prairies, and on roadsides, if given the opportunity, milkweed will establish in gardens and even thin lawns. Milkweed is tolerant of light shade, but generally prefers full sun. Seed pods mature and dry in the fall and the floss fluffs out in glorious wisps, waiting for the winds that will scatter the seeds.

Nature’s mega food market for insects, over 450 insects are known to feed on the sap, leaves, and nectar-laden flowers of milkweed. It’s not uncommon to see flies, beetles, ants, bees, wasps, and butterflies browsing the flowers, all at the same time. Goldfinches and many other birds use milkweed fiber and milkweed seed down to construct and line their nests.

The Monarch butterfly, a declining species throughout most of its breeding range, cannot survive without milkweed. During their brief caterpillar stage, the caterpillars only eat milkweed plants. In the butterfly stage, the monarchs lay their eggs exclusively on milkweed plants. However, with shifting land management practices, milkweed plants are disappearing from the landscape, which is a major cause for the decline of this beautiful butterfly.

Blooming from late summer through fall, there are more than 120 species of this hardy, fast-growing perennial. Generally speaking, goldenrod plants are tall and slim with fluffy golden flower spikes. After the blooming season, the flowers are transformed into voluptuous beige sprays containing the seeds. Goldenrod can be planted in the fall or spring. Sometimes thought of as a weed, it grows rapidly and is an aggressive spreader.

Once butterflies and bees finish feasting on goldenrod’s fall nectar and pollen, birds such as juncos, sparrows, and finches move in for the seeds. But one of goldenrod’s biggest draws is the range of insects the genus hosts, estimated at more than 100 species of butterflies and moths.

Also called wild bergamot, oswego tea, and horsemint, bee balm is in the mint family and, like mint, spreads by slender underground rhizomes. Though clump-forming, it is not invasive like mint. A new plant starting where it is not wanted is easily pulled out by its shallow roots.

A perennial ranging from 2 to 4 feet in height, bee balm produces tubular shaped, red flowers from June through August. The nectar of bee balm is a favorite of hummingbirds, butterflies, and hummingbird moths. Bee balm also attracts insects, which, in turn, attracts insectivorous birds.

If you want to watch natural hummingbird territoriality at work, plant bee balm. Its whorled heads of scarlet or pink flowers oozing with nectar are cherished and zealously guarded by Ruby-throated hummingbirds. Long-tongued bees, butterflies, and skippers also sip nectar from the flowers. After the flowering stage, a large hard-shelled nutlet filled with seeds attracts finches, sparrows, juncos, redpolls, and a host of other birds.

Blazing star, also called gayfeather or prairie star, is a hardy perennial native to the prairies and meadows of Eastern North America. L. spicata plants grow from a corm, forming large, tuberous roots. This perennial can tolerate heat and drought, sailing through some of the toughest summers without missing a beat. Planting blazing star in full sun will ensure that the plants put on a good show of flowers, and will keep them as compact as possible and help prevent flopping.

In spring, delicate grassy foliage is followed by tall, sturdy stalks blooming from the top down with vibrant, feathery purple, pink, or white “bottlebrush” flowers from July through August. With their tall wands of striking blooms, blazing star makes an eye-catching addition to sunny gardens. In the fall, leaves and stalks turn a rich orangey bronze with wheat-colored seed heads.

The nectar-rich flowers of blazing star are favored by monarchs and other butterflies and other insects, which will, in turn, attract insectivorous birds such as the black-capped chickadee, American goldfinch, tufted titmouse, and indigo bunting. Dozens of species of birds eat the copious seeds produced by blazing star. It is also a favorite meal for rabbits and deer, so plan accordingly.

An attractive perennial with purple drooping rays surrounding a spiny, brownish central disk, it is an incredibly hardy plant, being both heat and drought resistant. The flower closely resembles a daisy, with its long, oval-shaped petals and round floral disc. In fact, coneflowers are part of the Asteraceae family, which includes daisies, asters, and thousands of other species. Purple coneflowers go through an initial blooming period, after which they may lose their blossoms; however, it is not unusual for new petals to appear, particularly if you deadhead your flowers.

Coneflowers have three primary benefits to wildlife:  the nectar is attractive to native bees, hummingbirds, butterflies, and moths all summer long; it is a winter food source for a wide variety of birds including sparrows, goldfinches, blue jays, cardinals, black-capped chickadees, downy woodpeckers, and juncos; and lastly, the leaves also draw in additional insects that don’t feed on nectar.

In spring, with its simple foliage, you might question why the plant’s name alludes to its beauty.  However, from late summer into winter, when clusters of intense purple berries festoon the plant, it becomes apparent this shrub lives up to its name. Its berries are among the most eye-catching found in our fields and woodlands.

This deciduous shrub can reach a height of 9 feet, although most shrubs range from 3 to 5 feet tall. While the shrub grows best in loamy soil, it also grows well in other soil types, including clay soils. The key to American beautyberry doing well is planting it in sites that range from full sun to partial shade; however, experienced gardeners say that berry production is greatest when the plant is bathed in bright sunlight for no more than half a day.

It has been suggested that the unique lavender color acts as a gaudy roadside sign beckoning migrating birds that need to refuel before resuming their southward migration. Whitetail deer, raccoons, and opossums will eat the plant’s stems, leaves, and fruit, particularly when other foods are hard to come by. Other mammals that will dine on beautyberry include rodents, the nine-banded armadillo, raccoon, and the Virginia opossum. Quail also eat the berries, but songbirds seem to make greater use of them than any other group of wildlife—more than 40 species of birds feed on the purple berries.

A dramatic addition to the fall and winter landscape, its seed head is a cluster of burgundy red fruit, densely covered in bright red hairs, makes this native shrub a standout. Master gardeners have suggested pairing sumac amongst a mass of prairie dropseed or switchgrass, two warm-season native grasses.

Sumacs have high wildlife value. The caterpillars of a number of moths and several butterflies feed on sumac and rabbits and deer will browse the wood as winter food. The drupes are winter food (often late in winter when few other wild foods are available) for ring-necked pheasant, bobwhite quail, wild turkey, grouse, about 300 species of songbirds, as well as important sustenance for birds migrating in the fall. Its flowers support bees, wasps, and flies with nectar and pollen.

Common teasel is a biennial plant, which means they start growing one year but don’t flower until the next. Found in open, disturbed areas in various soil types, it forms dense patches of rosettes, then slowly enlarges its footprint by dropping seed, usually in close proximity to the parent plant. Although fairly aggressive, teasel’s shallow root system allows plants to be removed easily. In early summer of the second growing season, the stem grows to a height of up to 7 feet and forms flowers at the terminal. Tiny lavender flowers begin developing in the middle of the flower head and continue blooming towards each end.

The area where the side stems join the main stem forms a cup-like formation that catches water, and the word “teasel” is thought to be derived from the word for thirst. Why the plant grows these water-catchers is uncertain: it could be a trap for insects trying to climb up the stem, and there’s even a suggestion that the plant can derive nutrition from the drowned insects.

Teasel’s bristly seed heads are a valuable food source for birds such as goldfinches. Bumblebees find the densely-packed floret of this biennial an easily accessible source of nectar and pollen, collected simply by walking over the florets. The shoulder-high, prickly stems of the dormant plant remain upright throughout winter, providing food for birds even when other food sources are hidden under snow.

Nature, which never has an offseason, has not been idle. Autumn is the time when summer’s fading native trees, shrubs, and wildflowers are making seed heads ready for the next year’s growing season. The seeds from these remnants of summer past will find their way into the ground where they will germinate at the appropriate time, continuing the circle of life.

Note: Some of these perennials can spread rapidly. Do your research before planting any species with which you are not familiar. More information on these and other native species can be found in the national database of the University of Texas at Austin’s Lady Bird Johnson Wildflower Center https://www.wildflower.org/plants/. For a map of USDA Hardiness Zones, go to https://planthardiness.ars.usda.gov/PHZMWeb/