There weren’t many thrift shops around when I was growing up.  There was a mentality, perhaps leftover from the Great Depression, that they were only for people who needed “charity.”  We didn’t.  But, Mother wasn’t about to waste money on an item of clothing that would be worn only once.  So, one afternoon she drove me to a little house with a discreet sign on the door reading “Junior League Thrift Store.”  From Mother’s secretive attitude, you would have thought we were going to a speakeasy.

I liked to shop and often went downtown on the bus with my girlfriends and “just looked.”  All females innately understand that shopping, like fishing, does not require a “catch.”  All we needed for a pleasant day of shopping in the real stores on Main Street was bus fare and money for a soda at the drugstore.

The Junior League Thrift Store took my shopping experience to a different level.  I was astonished at the prices, so much lower than the Main Street stores.  Suddenly, a girl on a budget could afford to buy things, not just look at them.  As long as she didn’t mind that they were used.

The gown my mother and I selected was pale green.  It wasn’t the prettiest gown in the world but it fit and it was what I was going to get.  Mother made that clear.  When the prom was over, the green gown went back to the Junior League Thrift Store where mother could recoup some of her money by selling it on consignment to someone else.  Brilliant!

When I became a mother myself, my thrift-shopping passion really kicked in.  Somehow, I started with one kid and almost overnight I had three.  How could I clothe three children on a student-wife budget? 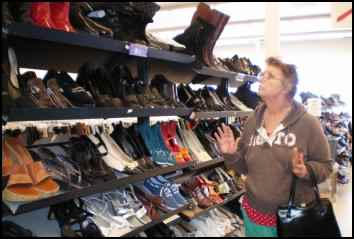 In a college town, thrift stores abound.  I went to them to save money—but I stayed for the fun.  There were always toys for the kids to play with, and jolly staff people who didn’t mind that my three wild children were creating chaos at knee level.  Thrift shopping had a friendly, easy-going vibe.  I made the transition from maternity clothes back into real ones with the help of thrift shops.  I could buy clothes of unclassifiable droopiness to cover up my constantly altering body shape.  I couldn’t do that at “real” stores with real sizes and separate departments.

In the thrift shop, anything could be anything—I could buy an Indian-print bedspread and cut it up for pillowcases and a headscarf.  If my son liked a pink tie-dyed shirt, I could let him try it on without the disapproving “real” salesclerks steering him to the “boys” section.  For a few bucks, we would leave the thrift store with pounds of clothing, household gadgets, a book or two and some “new” toys.

The only area in which the thrift stores failed was men’s clothing.  Though this has improved somewhat over the years, it’s generally true that men wear their clothes completely out.  My husband used to complain that I was buying him “dead men’s pajamas” at the thrift shop.

I gradually became totally dedicated to thrift shopping.  Nowadays, nearly all of my clothing, most of our bedding, many of our housewares, and occasional Christmas presents all come from thrift shops.  And a few years back I began a small business selling used books, many of which came from thrift shop shelves. 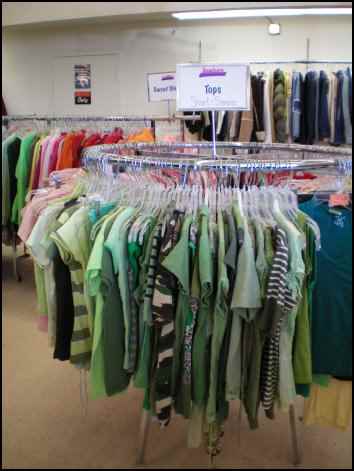 Recently, as a global economic downturn began to pinch ordinary Americans, there were news stories about people shopping at thrift and consignment stores.  It was as though the whole culture suddenly discovered the thrift store that had been sitting on the same street corner, big as life, for 20 years.  Having always shopped thriftily, I disregarded the news—until I tried to get through the door and down the aisles at my favorite Goodwill.  The media mavens were right—thrift shopping had hit the mainstream.

When I started this article I thought I knew it all.  I went to 10 stores, taking my friend Penny with me on one excursion and two of my granddaughters on another, in a wide sweep that covered three towns and two large cities in North Carolina.  I learned a lot about the changing face of thrifting in the current hard times.

Tim VanHoy, Manager of the Habitat for Humanity Re-Store in Mount Airy, told me something I hadn’t realized.  Thrift shopping is indeed up since the economic woes began.  But—donations are down.  People are hanging on to their stuff, maybe trying to sell it themselves instead of giving it away. 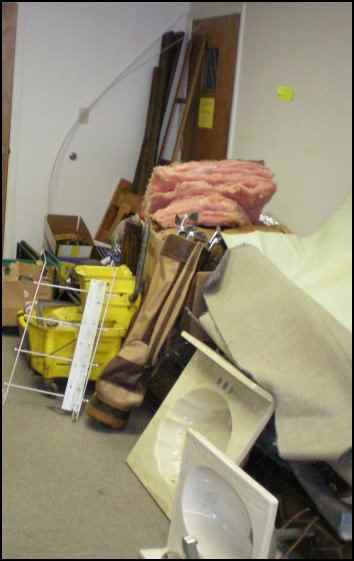 In addition to general household goods, Re-Stores specialize in recycled construction goods. But—construction is off.  And shoppers are looking for bargains even at the bargain outlets.  They expect thrift shops to lower their already absurdly low prices, and they’re annoyed when they don’t.  Nonetheless, Mr. VanHoy was proud to tell me that in his region, four new Habitat houses will be built this year, partially funded by the store’s sales.

I observed that there is a hierarchy among thrift shops, as Penny and I compared four stores.  Consignment stores (like the place where we got my prom dress) are the upper-class of the lower prices.  In Winston-Salem there is a posh consignment emporium named The Snob Shop.  It appeals to professional types who wouldn’t be caught dead at the Goodwill.  They can hold their heads up as they browse the high-fashion racks at The Snob Shop, located in a revitalized urban area near the university hospital.

Goodwill stores are consistently the brightest and best in our area.  You may not know that Goodwill is over 100 years old, and was founded on the principle of “a hand up, not a hand out.”  Goodwill Industries, which has affiliates all over the world, trains people who have had a hard time getting employment.  The trainees clean and repair donated items and stock and shelves—a near-constant job.  There is an effort to keep clothes arranged by size and sometimes by color.  The dressing rooms have proper doors with locks.  Goodwill shops are often new, stand-alone buildings that look like a “big box” store in miniature.  People who shop at Goodwill know that they’re contributing to a worthwhile cause, and they tend to donate there for the same reason.

A new chain has moved in to our region, giving Goodwill some competition—Megathrift.  The Megathrift store we shopped at, in an old shopping center, had a feature I had never seen before: not only were clothing items arranged by color, but house-wares were, too—so if you were looking for something for your blue living room, you could head to the Blue Shelf. 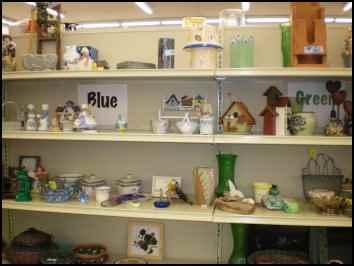 Megathrift staff was visible and helpful.  The prices were comparable to Goodwill: blue jeans for $4.00, dresses for $5.00, jackets and coats for $4.00, children’s clothes for $2-3.00, and most house-wares starting at a dollar or two.

Goodwill and Megathrift sell computers, books, and furniture.  Megathrift featured the “tag day” gimmick but I didn’t find any yellow tagged items that I liked that day.  I have noticed that even with tag-day sales, there are usually items that never go on sale, or tag colors whose prices are never reduced—things like jewelry seem to be immune to tag day.  I didn’t see any charity obviously associated with Megathrift, but on their website they announce a campaign to locate needy families monthly and give them a $100 shopping spree.

In a league of their own are the independent thrift and junk stores.  In Mt. Airy, a small, foothill town that has struggled to survive after the closure of its textile mills, there are at least six such stores.  Some specialize in used furniture and possible antiques—quilts and the like.  Penny and I visited two.  Granny’s Goodys (sic) had a homemade sign propped up out front against some kiddy bicycles.  The shop had a charming array of dolls on offer (dolls are a popular collector’s item) but they were overpriced. 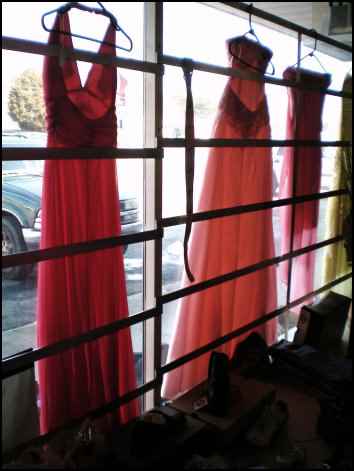 At Do Rags, a small shop across the road from the Re-Store, I spoke to the young man who runs the place with his mother.  He says they buy clothes that people bring in, getting a markup of only a dollar or two on each item.  Business for him has been slow lately but he was cheerful and helpful.  The store had a row of gowns in the front window, reminding me of my long-ago search for a prom dress.

Both Do-Rags and Granny’s Goodys have opened recently.  I was surprised that people have the money to go into business, but when you think about it, the “trash and treasure trade” has the virtue of low start-up costs.  Many of us could just about open a shop with the stuff in the garage.

Buying at thrift stores and reselling is a practice that has grown with the widespread use of eBay.  I search thrift shops for used books; once, a $1.00 book purchase netted me a $35.00 resale on Amazon.com.  Certain brands of children’s clothing fetch a high price at resale.  Smart traders, some of them owners of junk stores, trawl thrift shops looking for any “treasure” unknowingly being sold as “trash.”  Someone once told me he’d gotten a vase worth $700.00 for $2.00 at a yard sale.  It’s parasitic capitalism, with one product being recycled many times, the price going lower and lower in the first part of the cycle and gradually rising again.  Old books become “collector’s items” and clothing becomes “vintage” in just a few years.

Besides the “big box” thrift stores like Goodwill, Megathrift, and Salvation Army (the names may differ in different areas of America), and the little junk joints and weekend yard sales, the best bargains of all are undoubtedly Bag Day sales.  My granddaughters and I went to a PTA sponsored thrift store in Chapel Hill, North Carolina, on Bag Day.  The little girls didn’t like the crowds, the pushing, the long lines.  The reading area for kids’ books had been taken over by a clot of selfish grownups elbowing in for advantage.  In my younger days I would have been the first one through the door on Bag Day, when you pay $5.00 for as much booty as you can cram into a paper grocery bag. 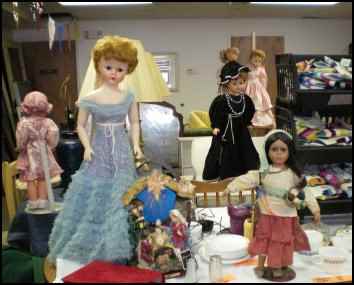 There is still a stigma attached to thrift shopping, even in these “downturn days.”  The goods are used, after all, and the stores are sometimes in seedy neighborhoods, with poor lighting and dusty displays.  An acquaintance of mine sneaks to the thrift shop occasionally and if she wears something used she will say, “I got it at Will’s good store,” a joke in her family to cover the fact that one has been reduced to going to one of those places.

For my part, I have shopped so long and so enthusiastically at “Will’s good stores” that I now hate the scratchy feeling of new clothes, and paying a price higher than $5.00 for a new dress fills me with guilt.  If I pay a rock-bottom price for something and get tired of it, I return it to the thrift shop with no regrets, knowing that someone else can use it and a worthwhile charity will be aided.

We should rejoice that, like my mother and me at prom time, we are now “forced” to take the thrifty way and can enjoy the benefits: bargain prices, a relaxed atmosphere, and a chance to help others by buying.  So, next time you pass by Will’s Good Store, turn in and have a look.

And don’t forget to donate to the thrift stores when you’re cleaning out your garage.

Bath, Body, and Beyond: DIY Bath Products from the Homestead
Grandma’s Kitchen: Lost Recipes of My Childhood