Several years ago, I decided that I would make bacon-wrapped jalapeño poppers for a family gathering.  I thought they’d be crowd-pleasers that would also be a snap to whip up quickly, with little hassle.  Boy, was I wrong.  All told, we are a group of around a dozen; I wanted each person to have at least two poppers, preferably three or four.  That meant I needed to halve and de-seed about 25 jalapeños, stuff each the halves with cream cheese, and wrap each one with a piece of bacon.  Not only did I fail to take into account the time all that would take (which was a considerable amount), I completely forgot to protect my hands from the pepper oil and ended up with burned fingertips that stung for days.  They were a huge hit with the family, but nothing I ever wanted to tackle again… no matter how delicious they were!  Fast-forward to last week when I was attending a potluck “happy hour” with some friends.  Among the myriad snacks, salads, and dips was one that caught my eye right away.  Golden and crispy, topped with bacon and jalapeños… I was in!  Under that crispy topping was a hot, gooey, cream-cheesy dip speckled with zesty jalapeño and crunchy bacon; it was fantastic!  This dip packs all the flavor and texture of poppers, none of the hassle, and much less of the danger.

* I find dicing the cold bacon raw with a very sharp knife and then cooking is a little easier than cooking it whole and crumbling it; you also end up with more uniform pieces this way.

Then, either with an electric mixer or a sturdy spoon, mix together the cream cheese and sour cream until completely combined.  Add in the cheddar cheese and the jalapeños and mix completely.  If you’re using an electric mixer, you might switch to a spoon before mixing in the bacon.  I did just because I didn’t want my mixer to break the bacon into smaller pieces.  Save a little of the bacon for garnish after baking.

Once the bacon is incorporated, spray your dish with cooking spray and spoon the dip into the dish, spreading it out to the sides of the dish evenly with the back of the spoon.

In a small bowl, mix together the melted butter, Parmesan, and panko until all of the dry is saturated with butter.  Spread the topping evenly over the dip and bake for 10-15 minutes, until golden brown.  Top with the remaining bacon and more jalapeños, if you like, and serve hot. 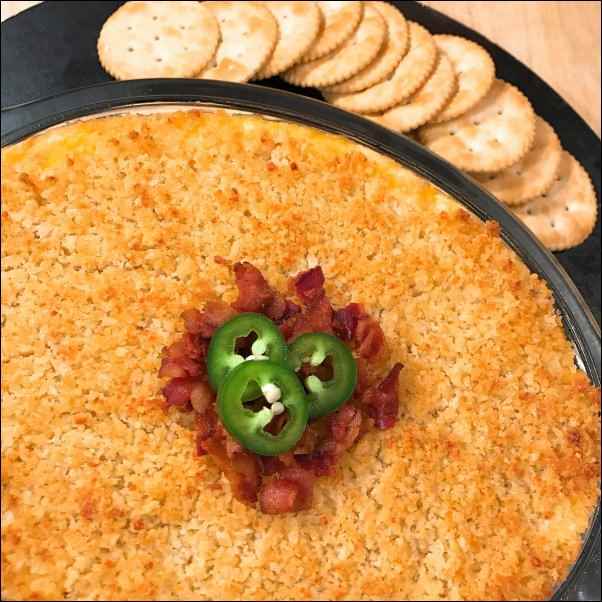 From the Horse’s Mouth: Anecdotes from Homeschooling on the Homestead
Homesteading with Dogs: Get By with a Little Help from Your Friends