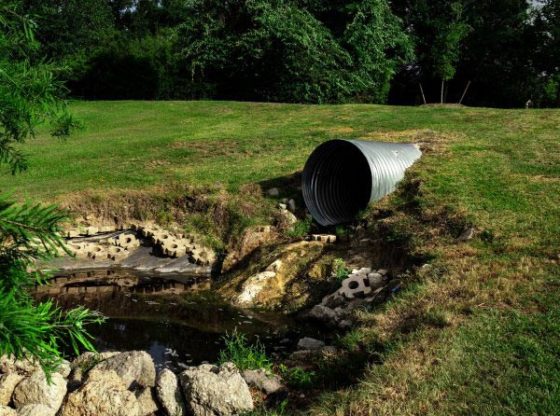 Water. We turn on the tap, and there it is. But where did it come from? How has it been treated (or not)? And where does it go once we are done with it?

If you are like us, you are connected to a municipal water/sewer system that performs reasonably well. The water is supposedly drinkable, looks and smells pretty good, and none of the kids has sprouted a third eyeball (yet).

We have been questioning our particular municipality about several issues and between the unsatisfactory answers and the rising costs (water, sewer, and garbage pickup in our little town costs between $50 and $75 per month), we are ready to chuck the whole system.

One of the issues is that our drinking water smells very chlorine-like most of the time, accompanied by an Alka-seltzer look and sound to it. I once cleaned my little boy’s goldfish bowl and within 5 minutes, the fish were belly up. Good thing they were nondescript orange ones, easily and quickly replaced. My neighbor’s son has actually been pelted by chlorine hail coming out of the shower. Our city water comes from a well, or several wells, they aren’t very precise down at city hall. Now, our city only has but 745 folks in it, but that’s gotta tax a well (or several wells ). We need a new source of water.

Our other issue is a murky sludge pit down at the corner of the property that smells suspiciously like sewerage. I call, I complain, the water dudes come out, dig a hole, stand in said hole smoking cigarettes, fill up the hole and declare it fixed.

We need a way to take care of our own wastewater.

Issue One – The three hurdles to water acquisition are:

The traditional way to take care of this is to call a well digger and pay him to drill a well somewhere in the area of 40-150′ down (costs and depths will vary according to your location, around here it’s about $15 per foot), and a septic guy and hand him around $5,000 to sink a 3,000-5,000 gallon holding tank and clay tile leach field that will take ALL the water from your house and infect it with the little bit from your toilets, rendering it all disgusting. There are several obvious problems with these two options.

Our underground water supply is being sucked dry from agriculture, manufacturing, and urban/suburban sprawl. It will take between 2,000 and 5,000 years to replenish our aquifers once they run out, and that’s a long time between showers. If drilling is out, that leaves us with standing groundwater (ponds, streams, rivers, and lakes), springs, or rainwater catchment.

Most of North America’s groundwater is still potable, unless directly downhill from a major contaminant (nuclear station, foundry, lots of moo-cows). If you are lucky enough to have a natural body of water on your property, you have a “source and storage combo” and all you need is a delivery system which can be anything from a carried bucket to a sophisticated pumping system run by standard electric, wind generator or solar panels.

Another earthbound source of water is an underground spring. Some springs show only as little muddy patches surrounded by lots of water-loving plants—kind of a mini marsh. Once you have determined that this stays marsh-like all year, you most likely have a year-round spring and can develop it. Depending on your skills and money, this can be simply dug out, lined with rocks and fenced off, all the way to constructing a bona fide well house. This too is it’s own storage “tank” so all that’s needed is a delivery system.

And there’s always rain. Catching rainwater leaves out the potentially contaminated groundwater middleman. Even in the driest spots in the US, if you are careful about collection and conservative about usage, rainwater can provide a lot of your household’s needs. In cold climates, the precipitation will have to be siphoned into the house to avoid freezing. Collecting off of the roof of your house is the most obvious catchment—just be sure there’s nothing toxic in your shingles. There are diverters made that dump the first rainwater from the roof, then spin to catch the rest of the water off of the rinsed surface. Rainwater can be caught in cement, wooden or plastic barrels or cisterns and there should be some sort of tight mesh cover to keep out skeeters, leaves and the occasional suicidal rodent.

Your delivery system can be buckets and forced child labor, hand pumps (personally, I loved the kitchen sink hand pump in my grandparents’ summer cottage and I’ll always remember my little brother pumping the outside pump and a frog falling out), electric pumps, wind-generated pumps or solar pumps. The solar pumps must receive at least 4 hours of direct sun per day to be effective. More is better, of course. The average pumping system works best if located 200′ or less from the house. You can purchase pressurized holding tanks so your pump doesn’t run every time someone washes their hands.

Now that you have your water and have chosen a delivery system, what do you do with it once it’s in your house?

There are roughly a bazillion different water Treatment and water Purifying gizmos being marketed. The first step is to have the water tested to see what nasties you need to eliminate, since different gizmos blast different things. You can have your water tested by your County Ag Extension (average cost $200), or you can purchase a kit from a private company like Suburban Water Testing (www.h2otest.com).

Most times, depending on your test results, you can get away with just filtering the water for everything but consumption.

A low tech but still effective way to kill living organisms in your water is to boil it for 10 minutes. This does not filter out harmful non-organic matter, however.

Filter systems do just that: filter out things like arsenic, mercury, and lead, and although they do trap bacteria, they don’t kill it. In fact, the filters are a wonderful breeding ground for bacteria. This results in water that may be more bacterial than it was raw (bad).

Reverse osmosis is also used to treat for toxic heavy metals, and it too lacks in the living organism destruction department.

Steam sterilizers usually come with a filter attachment, covering most of the bases.
Included in the list of What’s Nasty in the Water are:

Of course (hopefully) your water won’t have ALL the above floating around in it, and testing it will determine the type of treatment/purifying your water needs to make it safe.

Issue Two – What to do with the water AFTER you use it. Obviously, the septic route is wasteful and expensive.

The water from sinks, showers, clothes, and dishwashers is considered “grey” water: used, but not totally abused. There is no reason this can’t be collected and diverted to your veggie garden. In fact, the bits of food, soap (safe, biodegradable soaps are available and are, I think, superior to the other stuff anyway and no more expensive), and teensy bits of skin cells from washing are good for your plants. The simple way is to run pipe directly to the garden using a soaker hose irrigation system. You can get as elaborate as your imagination or industriousness allows. I have plans for several “branches” of said pipes that I can alternate from veggies to flowers and back via the use of cut off/diverter valves.

Toilets produce “black” water. Black-water treatment/disposal is much more rigidly regulated by local municipalities and there are many many ways to go about this unpleasant but necessary chore.  In fact, just the discussion of toilets merits its own chapter in our quest for utility independence, therefore I won’t be opening this “can” of worms (sorry) quite yet.

Better to leave ya’ll clutching your magazine, banging on the door, and hopping up and down. (smile)

Read “Cutting the Utilical Cord 3: Septic – When the Going Gets Tough, Where Will the Tough Be Going?”