"> Cutting the Utilical Cord 3: Septic – When the Going Gets Tough, Where Will the Tough Be Going? - Homestead.org

Cutting the Utilical Cord 3: Septic – When the Going Gets Tough, Where Will the Tough Be Going?

Home /Alternative Energy/Cutting the Utilical Cord 3: Septic – When the Going Gets Tough, Where Will the Tough Be Going? 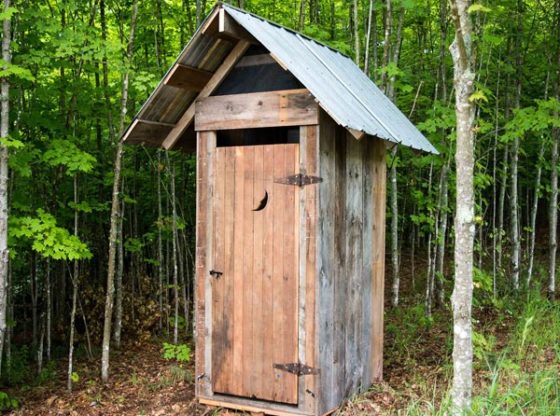 No topic is more avoided, hotly debated, and the cause of downright obsessive behavior than excrement. From the moment of our birth, our mothers and other caregivers are creepily concerned with our toilet habits. They are told to count wet diapers to gauge hydration, warily eye the differences in poopage and are as loyal to brands of diapers as they are to their spouses.

And potty training? Don’t get me started.

As grownups, of course, we no longer have these concerns.

In the beginning, there were the bushes. You just picked a likely-looking clump and there you had it; The Casual Bathroom.

Of course, if all your relatives used the same clump, things would soon pile up, so to speak.

Enter the outhouse. A pit is dug and a shelter constructed over it for privacy and protection from inclement weather Periodically, lime is added to aid in the breaking down of the waste. Once the pit is almost full, it’s covered over with dirt, a new pit is dug, and the shelter moved on top of the new pit. It’s simple and straightforward. Also stinky, full of bugs in the summer and freezing cold in the winter, plus it’s a long walk (or sprint) in the middle of the night.

With the urbanization of humanity, came the desire to perform bodily functions in the comfort of your home. While chamber pots were easy and low-tech, there was a perceived need for something even easier, less odiferous and more hands-off.

The Father of the Modern Bathroom was Thomas Crapper. He is credited with the design of the first flush-type toilet, changing the way the world would “go” forever. For several generations, this has been the norm in all but the most remote areas of our country.

See how happy they are roaming their hard-won acreage!

Marveling at the wildlife and plantlife!

Building their own little house, or just camping out until they can afford to build!

Planting a garden and tending it, reveling in the wonder of the seasons!

Hmmmm. They look a little uncomfortable.

Kinda hopping up and down with their faces all twisted up.

OH NO, WHERE WILL OUR HOMESTEADERS “GO”?

The phrase “Back to Nature” was never used in a more appropriate manner.

Of course, the shrubberies are still there, as is the option of the pit toilet outhouse. But thanks to the Wonders of Modern Science, our Homesteaders have several other options.

A composting toilet consists of indoor parts that look a lot like a flush toilet except it looks like the tank is beneath instead of behind and there’s a vent pipe going up through the roof. It’s a lot like the toilets on airplanes or trains with the waterless bowl and flapper bottom. Your compost toilet must be several feet above ground level to accommodate the outside part which is the composter itself. With an assortment of vents, fans, and hardworking microbes, the waste is turned into a small amount of pure compost that empties from a tray. This type of toilet runs somewhere in the area of $1,200.

This one is totally cool. It requires no plumbing, venting or outside apparatus. It also looks pretty conventional. When it’s time to use the toilet, you drop a paper liner in the bowl and go. At the press of a button, the paper and contained waste will drop into the bottom and be FRIED into a tiny pile of harmless ashes. My own personal misgivings about this come from having a 4-year-old in the house. I’m not so concerned about HIS safety, as his TOYS’ safety (let’s see what happens to a matchbox car in the Inferno. Awesome! Now Teddy’s turn) If you have no small children or have better control over yours than I do mine, and go shopping for this type of system, expect to spend about $1,700.

But let’s say our Homesteaders have no source of the electricity that both these options require.

And maybe, just maybe, they have better things to do with several thousand dollars than buy toilets. Fear not, for there is always

This is basically an outhouse in reverse. With a sawdust toilet, a 5-gallon bucket is fitted with a toilet seat and several inches of sawdust are placed in the bottom as a starting layer. Each time the toilet is used, more sawdust is added. This keeps the contents from attracting bugs and repelling humans. Once the bucket is filled, it’s taken out to the compost bin, emptied and covered. It’s recommended that the compost bin has 3 sections: one for fresh compost, one for last year’s compost (to be used as needed), and one for surplus sawdust storage. Cost for your sawdust toilet and compost bins: under $200.

Of course, you need to check with your local CodeLords to see which option is open and legal for you to pursue, but certainly, all of the above makes more sense than taking a small amount of waste, mixing it with mega-gallons of clean water, and then trying to clean it all up. I mean, really, think about it.

We as Homesteaders take great pride in being responsible for everything that goes into our families. We need to be just as responsible in regards to what comes out of them.

Grub in a Tub: Container Gardening on the Homestead
Seeds of Control: OMG it’s GMO!