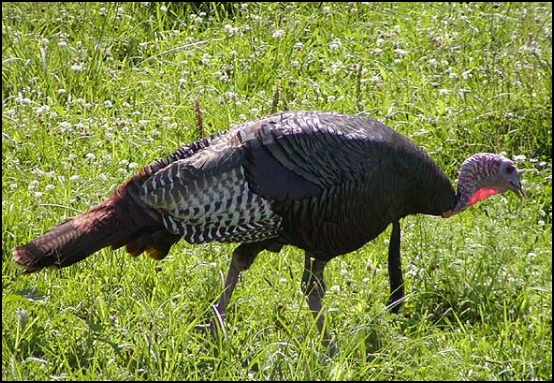 The North American Wild Turkey can be found in every state of the U.S., as well as in southern-most sections of most of the Canadian Provinces.  This interesting North American Native was abundant, particularly in the state of New York in the 1600s when settlers were arriving in the Eastern parts of Canada and New York, settling and attempting to tame the wilderness of an unsettled land.

With its colorful plumage of feathers, the North American Wild Turkey is seen on many Thanksgiving decorations and emblems, depicting this season of Fall and the harvest.  Our domesticated meat birds are derivatives of these smaller wild birds, which are being raised domestically today as an “exotic” breed, for meat and for interest in the species.

Although these wild birds were prolific and abundant in the early pioneer days of North America, the intensive clearing and settling of woodlands during the 1800s resulted in a decline and eradication of these beautiful birds in the United States altogether, and the last sighting of a Wild Turkey in that century, was in 1844 in the southwestern portion of New York State.  And for over one hundred years after that time, these birds were elusive and their numbers considered to be very low in all of the Eastern seaboard states where they had once been in such abundance.

By 1957, US conservationists began relocating breeding stock of Wild Turkeys into most states capable of sustaining and proliferating a Wild Turkey populous.  The result of this program was an extremely successful story in the field of wildlife conservation.  Wild turkey populations increased dramatically, and in the state of New York alone, turkey populations have arisen from only a mere 2000 in 1959, to over 65,000 in 1990.  There were an estimated 5 million Wild Turkeys in the whole of North America at that time as well.

Although these interesting fowl are smaller than our commercially raised Thanksgiving and Christmas turkeys in North America, their meat is similar, and those raised in a domestic environment and eat the same food as a commercially raised bird, will undoubtedly taste identical.  Hunting of these birds is restricted to conservation limits, based on area, although domestic raising of these birds has now become popular among poultry fanciers.

Males are often known as toms, or gobblers, and have several gender distinguishing features that include rust, green, and copper-colored feathers, changing almost iridescently in the bright sunshine.  The female, in contrast, is dull and generally brown and camouflaged with earth tones as most female birds are.  Gobblers have long black-tipped breast feathers and commonly have beards that extend past their breast feathers that can reach 16 inches in length.  Adult males weigh in at around 25-30 pounds and females being much smaller at only 12-15 pounds fully grown.

An interesting fact is that Wild Turkeys CAN fly at speeds up to 55 miles per hour!  Unless of course, they are pinioned as young hatchlings when being raised as domestic birds.  And they can also run at least 12 miles per hour when being pursued.

In the wild, these birds rely on a diet that includes nuts, berries, grapes, grasses, ferns, and also insects.  Studies in the wild have found that these turkeys consume over 600 different species of plan and animals (insects) at any given time.  And although these native North American birds are not considered “exotic” in the wild, they are an exotic but popular choice for something interesting and a little different in the coop.

They have an interesting vocalization that has a sound differing from that of domestic turkeys, and many poultry raisers have used them as coop “watchdogs”, as their call sounding somewhere between a yodel and a screech, will sound an alarm call often if there is “trouble” in the henhouse.  Their beautiful plumage has awarded many a very lucky turkey to be a farmyard pet, and many domestic breeders of this wild variety of turkey, breed them simply for the beauty of their feathers, and the for the look of what a “real” turkey is supposed to present as.

As in any breed of animals, there are societies and organizations dedicated to the interest and educational pursuit of bettering and popularizing the species, as exists for this particular bird.

Younglings and breeding stock is available at exotic auctions, private sales, and breeding farms for those interesting in this species of turkey and wish to raise them.

So, when you are enjoying your holiday turkeys this year, remember old “Gobbler Tom”, who began the tradition of turkeys on our tables at harvest, and at Christmas, when the European settlers first came to this continent hundreds of years ago, finding in abundance these tasty and magnificent Wild Turkeys.

Raising Heritage Turkeys on the Homestead: Get a Load of These Gobblers
Turkey Day… or Should It Be “Corn Day”?