Sticky and in Your Face: Spiderwebs

Home /Outdoor Lore/Sticky and in Your Face: Spiderwebs 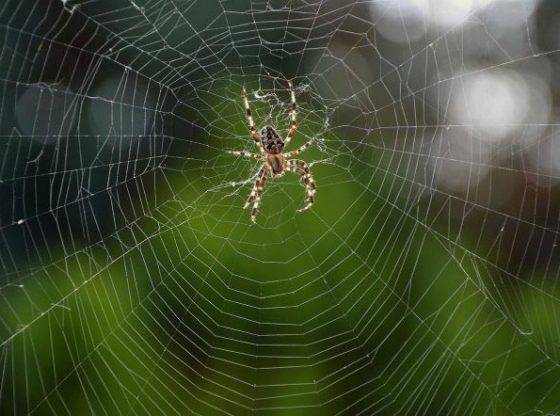 It’s a common occurrence this time of year. You’re walking through the woods enjoying the cool dry air as the autumn colors are just beginning to blush in the trees around you. As you stroll along, your gaze lingers on a particularly colorful bush off to one side and SPLAT!!, you’ve got a spiderweb and perhaps the spider who made it, instantly glued to your face.

There’s no getting around it, sometimes nature is sticky and gets all over you. This is particularly true in late summer or early fall, when spiderwebs across your path are as autumn-y as cold feet and hot soup.

Some webs catch the sunlight nicely, proudly presenting their delicate construction, glistening with the morning dew, hovering in mid-air before your path.  The majority, however, are invisible, or nearly so, and there’s only so much one can do to protect oneself.

Because I am in the habit of taking a morning constitutional, especially in times of particularly gorgeous weather, I can testify that I have much gooey/crawly experience at receiving incoming spiderwebs ear-to-ear and pate-to-jowl. Of course, I’ve been covered in web head-to-toe as well, I only emphasize the full-facial encounter because it is clearly the most sensation-rich experience.

I have some good news also: In all my years of unsolicited arachnid rendezvous, I have never received a bite, sting or whatever sort of wound it is that an irate spider might visit upon one’s soft tissues.

Good Bit of News II: If you follow the same path daily, and always run into the same spiderweb day after day, it won’t take long for the spider to realize that you lack the proper intelligence to alter your path appropriately, so after a time he’ll move his web higher than your face.

There are also a couple of things that even you can do. One is to break off a stick three or four feet long and wave it in front of you as you walk along. You’ll rarely get spiders or spiderweb on your visage when you do this, and since you’re alone out in the woods, it doesn’t matter how silly you look.

If waving a stick is too easy and effective for your taste, you might want to investigate becoming a spider-avoiding ninja. The ninja has studied spider behavior and web design at all eight feet of the masters. He knows that Spider chooses to build his webs over the road where he finds nearby branches to anchor to, so the ninja avoids overhanging branches and shrubs that encroach upon the road.  He takes note of anything floating in mid-air. He is ever watchful while passing such situations and, should a plump, juicy spider and spiderweb suddenly appear before his eyes, he stops instantly many times just inches from the web.

Then there are other times. Often he stops, but not before his face is pressing ever so lightly into the web. In these cases, resisting the urge to squeal like a little girl, he leans his head back and pirouettes in the direction of the closest overhanging branch or shrub, which is certain to be what the web is most firmly anchored to. As he rolls his body back away from the web, this gentle treatment keeps the web intact, and the ninja is away and free rather than clawing spiderweb off of his face. Continuing his 360-degree circle, the ninja steps to the other side of the road to continue, because Spider finds it easier to build a web from a branch to the ground than from one branch to another, chances are good that the web only covers one side of the road.