A (Computer) Room with a View 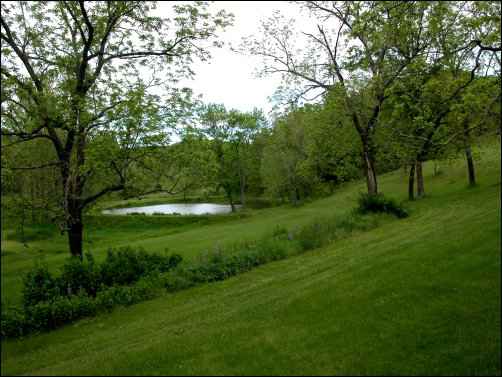 When sitting at the computer I have only to look slightly left to see a substantial part of my rural kingdom.  The view is through a window original to the house, double-hung, a single pane below and the top with two mullions, a three-over-one, one would say pretentiously.

The bottom half of the bottom sash is blocked by my “desk,” an assembly of cherry boards held up by various sticks and crosspieces.  The ell-shape creates a deep corner; my computers have lived on this temporary stage for twenty years.

The little house was built with four rooms only: girls and boys separated by a wall upstairs, parents in the smaller of the downstairs rooms.  This room was the main space with a fireplace with which to cook, eat and stay warm, the design of a great room, but too modest in size for that appellation.

It is the only room in this humble hut that has been citified.  Which is to say transformed by sheetrock.  This blasphemous condition happened because back in the early days of desktop publishing and writing we purchased a laser printer, an outrageously expensive item to our modest income, which toner would clog and refuse to print due to humidity.  So the room was gutted to the balloon-framed studs and ceiling joists, insulation implanted, then vapor barrier, then the out-of-place sheetrock which I skip-textured and Chris painted a so-light blue that it looks merely off-white.  A small window air-conditioner reduced humidity and made summer with closed doors bearable.  Above the view window is an early laser-printer output, a quotation from Philip Roth: “Nothing bad can happen to a writer.  Everything is material.” It has served to sustain.

As the computer faces the corner directly, the look left to the window is but a slight turn of the head.  This is a position to which I have become so attuned that any future studio will have the same design.

The view is the thing.  A writer’s muse is beyond gold.  When observed gazing for long periods at wall, ceiling or sky, a writer is in fact hard at work.  Writing appears to take place with scrawls on paper or taps on keyboard but the real work happens while the mind is playing.

Such play is enhanced with a stimulating view.

The view is south, through the screened porch, across the front yard, down to the stream, onto the hill beyond and the sky above.  Its particulars include various weeds and grasses delusionally named lawn, two lilac bushes, two heart-nut trees, a cedar, various oaks, a young mulberry Chris disclosed last summer through heroic brush removal, big walnuts, a butternut and several sycamores at the stream (now within the beaver pond, so doomed), then up to an unending panorama of oaks and pines and finally the sky.  The new stream crossing destined to become a dam is far left while the largest white oak on the place dominates on the right.

Nature never rests; the scene is always alive.  Seasons prepare then burst into view.  When door or window are open the earthy smell of growth and decay flows in.  Bluebirds, cardinals, crows, bluejays, finches, woodpeckers, phoebes, wrens feed, mate and rear, turkey vultures soar on updrafts, kingfishers splat the water for minnows, squirrels stash and retrieve.  Occasionally a deer appears across the stream, ears and tail flicking.  If Benny, the Napoleonic Aussie spots it, it is gone in a bound; outraged snorts track it up the forested hill.  Turkeys appear and they, too, are routed from his territory, as happened minutes ago.

If all the critters are quiescent then there is always something else at work: morning fog, breeze or wind or cloud movement, water sparkles and reflections, constantly migrating shadows, raindrops on leaves, as is happening now.

This is the value: nature soothes; movement inspires.

The Summer Kitchen: Why It’s Still a Good Idea
Dumpster Diving: One Person’s Trash Could Be Your Treasure.