Letters of a Woman Homesteader 1: The Arrival at Burnt Fork

Home /History/Letters of a Woman Homesteader 1: The Arrival at Burnt Fork 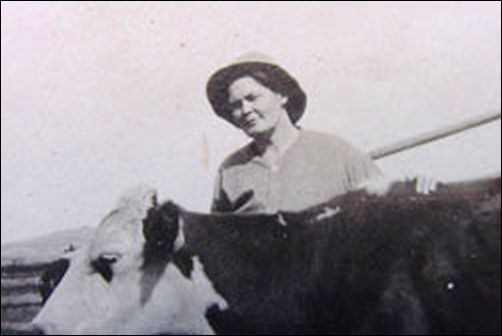 PUBLISHER’S NOTE:  The writer of the following letters is a young woman, Elinore, who lost her husband in a railroad accident and went to Denver to seek support for herself and her two-year-old daughter, Jerrine. Turning her hand to the nearest work, she went out by the day as a house-cleaner and laundress. Later, seeking to better herself, she accepted employment as a housekeeper for a well-to-do Scottish cattle-man, Mr. Stewart, who had taken up a quarter-section in Wyoming. These Letters of a Woman Homesteader, written through several years to a former employer in Denver, tell the story of her new life in the new country. They are genuine letters and are printed as written, except for occasional omissions and the alteration of some of the names.

Are you thinking I am lost, like the Babes in the Wood? Well, I am not and I’m sure the robins would have the time of their lives getting leaves to cover me out here. I am ‘way up close to the Forest Reserve of Utah, within half a mile of the line, sixty miles from the railroad. I was twenty-four hours on the train and two days on the stage, and oh, those two days! The snow was just beginning to melt and the mud was about the worst I ever heard of.

The first stage we tackled was just about as rickety as it could very well be and I had to sit with the driver, who was a Mormon and so handsome that I was not a bit offended when he insisted on making love all the way, especially after he told me that he was a widower Mormon. But, of course, as I had no chaperone I looked very fierce (not that that was very difficult with the wind and mud as allies) and told him my actual opinion of Mormons in general and particular.

Meantime my new employer, Mr. Stewart, sat upon a stack of baggage and was dreadfully concerned about something he calls his “Tookie,” but I am unable to tell you what that is. The road, being so muddy, was full of ruts and the stage acted as if it had the hiccoughs and made us all talk as though we were affected in the same way. Once Mr. Stewart asked me if I did not think it a “gey duir trip.” I told him he could call it gay if he wanted to, but it didn’t seem very hilarious to me. Every time the stage struck a rock or a rut Mr. Stewart would “hoot,” until I began to wish we would come to a hollow tree or a hole in the ground so he could go in with the rest of the owls.

At last we “arriv,” and everything is just lovely for me. I have a very, very comfortable situation and Mr. Stewart is absolutely no trouble, for as soon as he has his meals he retires to his room and plays on his bagpipe, only he calls it his “bugpeep.” It is “The Campbells are Coming,” without variations, at intervals all day long and from seven till eleven at night. Sometimes I wish they would make haste and get here.

There is a saddle horse especially for me and a little shotgun with which I am to kill sage chickens. We are between two trout streams, so you can think of me as being happy when the snow is through melting and the water gets clear. We have the finest flock of Plymouth Rocks and get so many nice eggs. It sure seems fine to have all the cream I want after my town experiences. Jerrine is making good use of all the good things we are having. She rides the pony to water every day.

I have not filed on my land yet because the snow is fifteen feet deep on it, and I think I would rather see what I am getting, so will wait until summer. They have just three seasons here, winter and July and August. We are to plant our garden the last of May. When it is so I can get around I will see about land and find out all I can and tell you.

I think this letter is about to reach thirty-secondly, so I will send you my sincerest love and quit tiring you. Please write me when you have time.