"> Natural Building Colloquium:Get Down and Dirty with Mother Nature

Natural Building Colloquium of Kerrville, TX: Getting Down and Dirty with Mother Nature

Home /Construction, Ecology/Natural Building Colloquium of Kerrville, TX: Getting Down and Dirty with Mother Nature

If you are thinking and have been reading about Alternative Building styles, this is one of those things that you see on the ‘net and think to yourself, “Golly, that would be SO much fun. We should go.” Then you see that it’s being held (insert somewhere that’s clearly too far from home to be affordable or sensible). Deep depressed sigh, and the conviction that SOMEDAY…

And then one comes up that’s tantalizingly near to home, and it’s sorely tempting. Being a Grown-Up and all, the excuses NOT to go pop up like Whack-a-Moles:

We’d have to take time off of work

It’s too hard to leave the farm for a weekend

Here’s where the decision must be made to keep dreaming, or to go get dirty.

The Natural Building Colloquium was held in Kerrville, Texas on a perfect autumn weekend. We went, and we got dirty.

Having had a number of family challenges this past year that all involved fistfuls of cash being thrown at them, our discretionary budget glowed as red as Rudolph’s nose, so here’s what we decided: this weekend would be our Christmas present to ourselves.

Once I put down on paper the stuff we’d be learning, the people we’d be meeting and the helpful contacts we’d be making, even if we only learned ONE thing that would save us time, energy and money, that ONE thing would most likely cover the expense of the weekend.

And I didn’t have to gift wrap it. Sweet.

This is a totally factual account of the first weekend of the Natural Building Colloquium as experienced by one tiny family. I am confident that every other participant has a completely different story—there was THAT much going on.

But if you’ve never been to one, it’ll give you an inkling of what to expect.

Because I’m sure they are all as different as snowflakes.

The setting was perfect: a 50-acre campground in the heart of the Central Texas Hill Country. And the weather was outstanding: overcast to keep it from getting uncomfortably hot during the day, and just chilly enough at night to make for good snuggling in the outdoor theater during the evening presentations. We were in a drought condition, so there were no campfires. That was a disappointment to my seven-year-old son Alec, who was looking forward to blazing marshmallows, but for most of the tasks at hand, it was ideal.

The days began with food: wonderful, fresh food made on site and eaten in the Great Outdoors: tasty, unique, colorful. Alec made it to the end of the serving counter the first morning, stopped, turned to me suspiciously and asked, “Where’s the MEAT???”

“Oh, yeah. Sorry, hon’, this is a vegetarian shindig.”

After the initial shock/panic attack, he managed to find items that were not only ingestible, but also deemed “really not bad.” In case you have never had children, “really not bad” is as high a compliment as you should expect when introducing something “strange” into their diets.

After breakfast was Morning Circle in the amphitheatre set into the hillside. Announcements, schedule affirmations and changes, along with some songs and silliness to start the day.

Then on to talks, demonstrations, and projects.

This type of event really should be attended by multiple folks in each group. There is so much going on at once; it’s the only way to glean even a portion of knowledge. At any given moment, my husband would be at a demonstration, I would be in a discussion group, and our son would be wallowing in some sort of earth/straw/water concoction.

It seems that straw bale building is the “new thing”, and most of the people there were geared towards that form of housing. We attended the areas we are personally interested in: building with earth, and collecting/storing/treating water. I don’t know why I just can’t get into the whole straw bale thing – I think it’s a tiny vestige of the “Three Little Pigs” story juxtaposed next to the fact that we live in Tornado Alley that causes some sort of disharmonious clash in my brain.

I admit, I have a weird brain, but it’s the only one I was dealt, so there ya go.

The talks we attended were extremely well done and it’s refreshingly obvious that the speakers are not “professional lecturers.” They speak zealously, passionately, their words flowing through the air not only to convey learned knowledge, but straight from their own hearts into yours.

We were encouraged by the quiet earnestness of Pat Taylor discussing the renovation/salvation of adobes that are simultaneously as strong as the ages are long and appallingly fragile in the face of human stupidity. Art Ludwig shared with us his ideas about water—not as a preacher, not as a profiteer, but sharing what works for HIS family and HIS little corner of Mother Earth, and what may work for our families in our corners as well.

We were intrigued and challenged to think outside of the box by the “…and now for something completely different…” ideas of Tom Watson, who pioneered the “Watson Wick” and other novel ways to deal with gray and black water.

We were brought to tears by Carole Menkes, surrounded by her husband’s achingly beautiful pieces of bamboo art, sharing his work with us a mere four days after his unexpected death. She told us that even though his memorial service would be on the Monday following, she considered THIS moment her memorial to him—in the midst of people who care about and appreciate beautiful natural things, with the gentle breeze carrying the songs of the earth through the pavilion. She never did refer to Mark in the past tense, and that was fitting, for I’m certain that he WAS there.

And we were completely taken with and entertained by the lively stylings of Brad Lancaster, who taught us about rainwater catchment using jokes, songs, and complete groaners of puns – all the while leaping from one end of the stage to the other.

We were most looking forward to meeting The Earthbag People – Doni and Kaki, since we are planning on using earthbags extensively on our new place. Unfortunately, they were stranded in Utah with car trouble and didn’t make it to Kerrville before we had to leave, which was disappointing, but out of anyone’s control.

The only “landed on the wrong planet” moment of the weekend was the Builders’ Forum, led by David Eisenberg. Apparently, even in this group, “Owner-Builder” means you hire an architect, get a mittful of permits and utilize people like electricians, plumbers, and contractors. I showed up with our plans on graph paper, hoping to get pointers and ideas on how a big guy with health concerns, a pear shaped old hippie-chick, and a 7-year-old boy can physically put together a comfy, earth-friendly residence using shovels, leverage and salvage-gleanings. However, the first three subjects covered were zoning, financing, and insurance. Go figure. Normally, I would not have been afraid to interject my own questions, but the time allotted was limited, and most of the attendees needed to know about what was already on the table, so I approached David afterwards and he was very supportive and is willing to give us pointers and whatnot as we do our actual building.

Not a problem for me personally, as I am terminally “time challenged”, but worth mentioning, is that the times listed on the Day’s Schedule board were at best Loose Suggestions. Hey, creativity, learning, and thinking defy rigidity.

At the opening Morning Circle, we were encouraged to make a Prayer Flag sometime during our stay. They hung these multicolored butterflies of thought all around the amphitheatre—waving jewels of emotion and dreams. Alec sat long with his ink pen, staring at the blank piece of cloth, before his heart told his fingers what I feel is the epitome of why we were there: 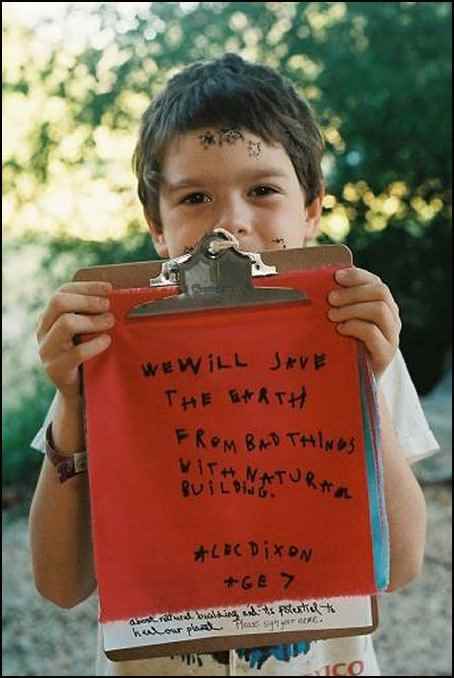 Our homes are shelters for our bodies, and safe places for our “stuff.” As residents of Mother Earth, if we are fortunate enough to have the opportunity to build our own, we should try our level best to practice the following:

Use the smallest amount of materials as possible

Use natural and/or salvaged materials wherever we can

If we must cause disruption by our building and living, to make sure it’s as tiny as it can be, and to compensate Mother Earth’s other residents accordingly

Build using as many passive/alternative sources of power as we can, always remembering that eliminating things that NEED power is the most effective way to save

Strive for self-contained food and water systems, stressing local plants and animals that don’t require a lot of chemical intervention to produce well, and even if literally surrounded by fresh water, to cherish it, for it is our greatest treasure.

Our personal goal is to build by hand, quietly and slowly, using materials inherent to our region: earth, stone, and logs. A shelter should be as individual as the family that lives in it. “Houses” have Resale Value, “Homes” have Value Without Measure.

In our society “Everything has a price”, but truly wealthy families know that some things are irreplaceable and are not for sale. People to love and who love us back cannot be bought, meaningful employment sometimes has no paycheck, and Home should welcome us and shelter us from whatever the rest of the human world throws at us.

What better escape is there from a culture full of speed, pointy things, plastic, mass production, and noise than an embrace of earth, logs, straw, fiber, and stone – every inch an individual spirit, formed with care by your own hands and the hands of your loved ones into one…big…giant…hug.

Natural building. An age-old idea whose time has come. Again. 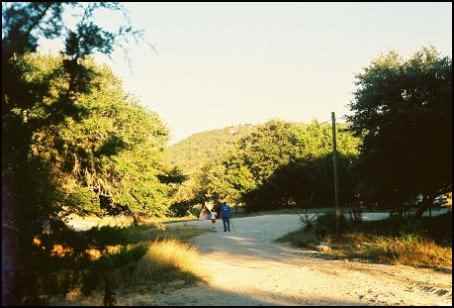