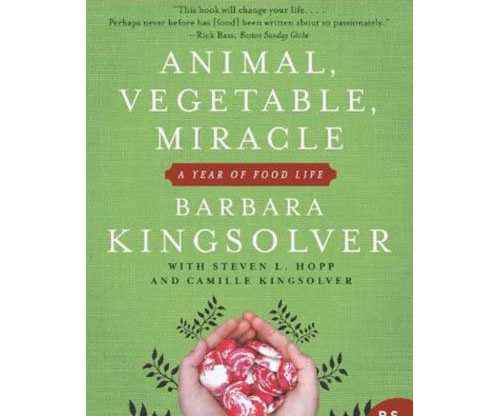 Sometimes, a book is so perfect it defies definition.

I was given this book as a birthday gift.  Actually, it was a sort of a re-gifting, as the friend who gave it to me admitted she’d received it from someone else and “just couldn’t get into it.”  She was gracious (?) enough to relay though, that she thought it was EXACTLY the sort of thing that I WOULD “get into”, the implication being, of course, that her version of fascinating and mine are miles apart.  And even though that’s true, I’d never be ungracious enough to publicly “out” her poor taste in books.

So, thanks for the book, Gayle.

Animal, Vegetable, Miracle: A Year of Food Life by Barbara Kingslover is a year-long journal that takes us through one growing season—one season of a family that makes a promise to themselves to eat as locally as possible for one year—the ideal being to feed themselves from their own yard.

Eating fresh in season, or preserving for later, means giving up the ease of supermarket bananas—they don’t grow in their neck of the woods.  Simultaneously, it means glutting without guilt precious tidbits like strawberries and wild mushrooms, eaten with carefree abandon when they’re literally Free for the Picking, as well as postponing a trip because the cherries came ripe before anticipated.

Animal husbandry in the form of poultry is covered well and honestly, and proving that Chicken Herding is something that a child can not only be trusted to help with, but given into the lap of the right young entrepreneur, can be a thriving lesson in economics and small business administration.

The solemn passage from “something with feathers that’s alive” to “something on our dinner plate and is…not” is also addressed respectfully.

If a journal of this type were all that was in the book, it would be well worth the reading.

But wait… There’s more! (and your Ginsu knives will come in handy for this part)

Using only things that are in season can be a challenge not only to grow and shop for, but in cooking as well.  Most recipes call for ingredients that are wildly disparate and that would never ever live as seasonal or geographical neighbors in the natural world.  Therefore, there are recipes at the end of every section for the wonderful dishes that are described in the text—compiled, explained and brought about by Barbara’s daughter Camille.

Her husband, Steven, supplies the book with handy and technical “asides” throughout as well, making this book a Family Affair, along with the story it contains.

And as if this all isn’t enough, the recipes can be downloaded in actual cookbook form by visiting AnimalVegetableMiracle.com.

This is much more than a how-to-garden book or a how-to-can book, or a cookbook, or even merely a journal of the growing season.  Given Ms. Kingsolver’s gift of storytelling, this is the antithesis of Seinfeld, which was, proudly, a “show about nothing.”

Animal, Vegetable, Miracle is a book about everything, from the tiniest garden miracles to the most Earth-shattering difficulties we currently face.  And it’s all wrapped up in a lovely package for those of us who “still have some element of farm nostalgia in our family past, real or imagined: a secret longing for some connection to a life where a rooster crows in the yard”.

Depletion and Abundance: Life on the New Home Front by Sharon Astyk Review

The Origin of the Robin
Quick-pickled Red Onions