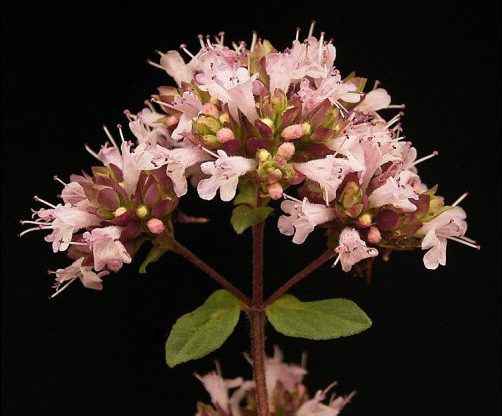 Oregano’s name means “joy of the mountain” derived from two Greek words, oros (mountain) and ganos (joy), because of the pleasure derived from several varieties of this plant that cover the hillsides in their natural habitat.  There can sometimes be great confusion over the term “oregano”. Many plants around the world contain the same essential oil that gives the Origanum genus its fragrance.  Although there is an Origanum species, the oregano scent and flavor is produced by the high content of carvacrol found in many plants.  They may smell like oregano, but they do not look like oregano.

Origanum vulgare, a green-leaf variety commonly known as Spanish oregano, is the popular seasoning herb. Origanum vulgare is the most common of those plants that grow wild in the mountains of Greece and has a very ancient medical reputation.  The Greeks used it extensively, both internally and externally for fomentations.  Pliny, the Roman scholar, recommended oregano poultices for relief of scorpion and spider bites.  It was listed in some materia medica as a stimulant and carminative.  A tea brewed from the leaves is sometimes used for chronic coughs and asthma.  The whole plant has a strong, peculiar, fragrant, balsamic odor and a warm, bitterish, aromatic taste, both of which properties are preserved when the herb is dry.

For medicinal purposes, the oil is distilled with water.  The camphoraceous principle contained in the oil is responsible for the relief of nervous headaches when an infusion of the fresh plant is taken.  Oil of oregano has been used as a remedy for narcotic poisons, convulsions, and dropsy.  A few drops, placed on a cotton ball and placed in the hollow of an aching tooth frequently relieves the pain.  A warm infusion of this herb taken at the onset of measles would speed up the eruption and lessen the length of illness.

Externally, both leaves and flowering tops could be applied as a hot fomentation to painful swelling and rheumatism, as well as for colic.  Parkinson tells us, “swete” bags, powders, and washing water made from this plant were widely used.

European colonists to America brought this herb with them; it soon escaped their gardens and O. vulgare (Wild Marjoram) is now listed in most wildflower guides of the Northeast states.  Early colonist homemakers would scour their furniture with its aromatic juices.  They also used the flowering tops as a dye to make wool a purple color and to turn linen cloth a reddish-brown.  Before the introduction of hops, this herb was much in demand for ale-brewing.  Flowering tops were also sometimes put into table beer to give it an aromatic flavor and preserve it.  The whole plant has a strong, peculiar, balsamic odor and a warm bitterish taste, which is preserved when the plant is dried.

Seeds most commonly sold as oregano are O. Vulgare.  Demands loose, well-draining soil and full sunshine.  Arid conditions produce the best flavor.  This variety is a perennial herb with creeping roots which sends up slightly woody stems about one foot tall.  The plant will eventually spread to a large clump.  Flowers in summer range from white to mauve-purple.  Lightly prune all summer long as needed.  In midsummer and again in fall, cut back the plant by half.  The harvested branches dry quickly by simply lying out of sun where there’s good air circulation.  Propagation is easiest by root division.  About the end of June, its unusual form of flowers begin showing.  They are pale pink to white and much loved by bees.  Wild Marjoram is one of the few herbs that should be harvested when the plant is flowering, usually in late June or early July.

Aside from the multi-talented O. Vulgare, the Origanum family has two branches, culinary and ornamental.  First we’ll talk about the other culinary members.  Those oreganos most commonly associated with cooking are Origanum onites, Origanum vulgare, and Origanum herocleoticum.  Commercial oregano, primarily imported from Greece and Turkey, is usually O. Vulgare subsp. Hirtum (Greek Oregano.) According to Art Tucker, noted herb expert, – “it has a very pungent, penetrating smell, almost like creosote.”

O. Onites (also called Pot Marjoram), a native of Sicily, is the oregano of choice on the island of Crete.  With a strong, musky scent, this tiny-leafed oregano is a hardy perennial, preferring warm temperatures and dry, light soil.  Propagate by cuttings taken in early summer or by root division in late spring.  If you can locate authentic seed, they can be planted outside in March but are very slow to germinate.  It is an easy-to-grow variety but will not tolerate a hard freeze.  Pot Marjoram forms a spreading clump, which should be divided every few years.  It blooms in shades of white to pale pink.

The oregano of choice for Mexican cooks is Lippia graveolens, a perennial member of the verbena family and native to Mexico.  It has naturalized along the Texas-Mexico border.  Its use has spread throughout the South and is available in many plant and seed catalogs.  Lippia graveolens, sometimes identified as Mexican Oregano, is not a pretty plant but is easy to grow and has good oregano flavor.  It has pale green leaves one inch long that are bristly to the touch and cream-colored flowers.  I consider it a tender perennial; some years I have wintered it over in my garden.

Another culinary oregano of Mexico is Poliomintha longiflora.  This shrubby perennial bears long lavender flowers in late summer amid tiny, glossy leaves.  It can stand heavy frosts (30º to 20º ) or you can transfer it to a pot for wintering indoors.

Caribbean cooks choose another of the species, Lippia micromera with smooth, dark green leaves about ½ inch long.  It also produces clusters of small, creamy-white flowers in late summer.  Both Lippias are upright, sprawling shrubs that need to winter over in a greenhouse, keeping it on the dry side.

Commonly known as Cuban oregano, Plectranthus amboinicus is a relative of Swedish ivy because of its popularity in that country.  Its plump, fuzzy, succulent leaves are very pungent and will make a delightful houseplant when you have to bring it in for the winter.  This herb needs constant warmth and full sun; a light frost will turn it to mush.  It is often confused with Plectranthus marrubioides, also identified as Vick’s plant because of its camphor scent.  Besides the difference in scent, a careful comparison of the leaf shapes will soon teach you the difference.

Local cooks in the western U. S. (from Colorado and Nebraska to Arizona and Texas) sometimes harvest an annual native called Monarda pectanata, a pink-flowering plant.  And in the Rocky Mountains, Brickellia varonicifolia, commonly known as brickell-bush or Rocky Mountain oregano (it’s in the daisy family) serves as a local oregano flavoring.

All of these oreganos are interchangeable in the kitchen.  Oregano has a fragrance and taste similar to marjoram, but stronger and less sweet.  Oregano’s hot peppery taste will enhance tomato, cheese, and egg dishes.  Use it to give a zip to yeast breads, meats, vegetables, and shellfish.  Its flavor combines well with garlic, thyme, and parsley.

Now for the members of the Origanum family that are grown for their ornamental addition to the garden rather than flavor in the kitchen although our first oregano, Origanum dictamnus also known as Dittany of Crete, is sometimes included as an ingredient of vermouth.  It has round-ish leaves with a white down and flowers in drooping spikes.  I have grown this herb off and on but never used it in the kitchen.  Although it is possible to use the leaves in the kitchen, you may find the flavor much too strong.  The flower heads are used in some Mediterranean cuisines and sometimes a tea is brewed from the flower heads.

Its attraction for me is its delightful flower show and long herbal history.  It is grown primarily for its arching stems that culminate in tight cone-like spikes of showy pink bracts that have a long blooming season.  Dittany of Crete makes a spectacular hanging basket plant.  It may be started from seed or propagated by summer cuttings, but obtain plants to get a head-start on your enjoyment of this delightful herb.  Give the plant full sun, less than average moisture and excellent drainage.  This oregano’s blossoms turn to a rich brown, green or purple when dried depending on when they are picked and how they are dried.  These make beautiful additions to dried arrangements.

A similar plant, O. Rotundiflorium has distinctly veined round leaves and white flowers.  O. Libanoticum has trailing weak stems which also look great in a hanging basket.  With smooth roundish leaves and flowers of creamy bracts tinged with pink, this herb will spread to a mound-like plant.

To thoroughly confuse you, there is a genus Origanum majorana which is known as sweet or knotted marjoram.  It also is a native to Mediterranean regions.  This whole plant is of a dainty texture, velvety to the touch and bearing little green balls from with the flowers come.  These “knots”, about 1/8 in. across, stand on their own stems either singly or in groups and are four-sided, made up of tiny leaves each folded over the next.  Out of each leaf comes the tiniest creamy flowers, a few at a time.  When O. marjorama is planted in the ground, the stems stand quite upright; in a pot, they droop over the sides gracefully.  It will get as tall as twelve inches high when grown in garden soil.

There are other varieties of Origanum such as the dwarf-leaf creeping O. Virens and O. Vulgare ‘Aureum’ (both known as golden oreganos) that have little fragrance but are valuable as ground covers.  They have been reported as being hardy as far north as the Georgia/Tennessee border.

Although oreganos can create a great deal of confusion, this herb has become an essential ingredient in our lives, both as a favorite culinary herb and as a delightful addition to our gardens.  Also, remember to harvest the blossoms of all varieties to decorate your wreaths and add to potpourris.

Most oregano seed sold is Origanum vulgare.  The tiny seeds should be planted uncovered; they germinate better in light.  Soil temperature should be 70º F.  Seed should germinate in a few days.  Pot them as a clump and keep on the dry side.  Or you can multiply your plants by root division in autumn.  Once the plant reaches 6 inches, you can begin snipping sprigs to season your food.; doing so produces a bushier plant.  Oreganos are aromatic, herbaceous perennials with erect, hairy, square stems.  Flowers are 1/4 in. long, tubular, two-lipped, rose-purple to white with four protruding stamens on terminal spikelets to 11/8 in. long.  Oregano’s leaves are pointed oval growing on opposite sides of the stem to a length of 2 in.  The plant can grow to a height of 1 to 2 feet.  Oregano is easy to dry simply by gathering stems in bunches and hanging upside-down out of the sun where there is good air circulation.  Blooming period lasts from the end of June through August.  Gardeners recommend planting oregano with beans to enhance their growth.  For an oregano with more flavor, look for plants of O. Heracleoticum.  Plant hardiness to zone 5 in well-drained average soil and full sun.