"> Folk Medicine in America – Part One: Maggots, Hairballs, and Eels

Medical Folkways in America – Part One: Maggots, Hairballs, and Eels

Home /Health and Diet/Medical Folkways in America – Part One: Maggots, Hairballs, and Eels

I was reading through some old books looking for information on this and that, when I came across THIS: maggots as medicine. But wait—there’s more. Hairballs, eels, even kerosene, were used for healing, not just by our forebears, but in some cases, since, like, forever. And some of these bizarre folk medicine cures are still in use.

Take the unusual case of the madstone (see title photo above). The madstone is almost unknown today, but just fifty years ago, it would have been a sought after curative. I say sought after because a madstone is by no means easy to procure.  A madstone is a calcified hairball from the stomach of a ruminant. Most desired ruminant: a pure white deer.  The hairballs accumulated by regular-colored deer, it seems, lacked the optimal healing power of those from the stomach of a rarer paler animal. A madstone may look like anything from a hunk of driveway gravel to a something akin to a chunky peanut butter cookie. Distressed neighbors who had the ill fate to have been bitten by a snake, or, worse, a rabid dog, visited those who had the good fortune to own one and it was considered un-neighborly and, possibly very unlucky, not to lend the madstone. The desperate relatives would place the madstone on the wounds of the bite victim, it would be held down with a bandage and soaked in water, or better, milk. Once the liquid soaking agent turned green, it was agreed that the infection had been absorbed magically by the madstone.

In the North Carolina mountains, right around Mayberry, stories are told of the marvelous healing powers of madstones, yet very few of these odd objects are in existence, or maybe they are being hidden by their owners. You can’t sell a madstone, though people have offered to buy them. It is handed down to the next generation, and offered to people in need. 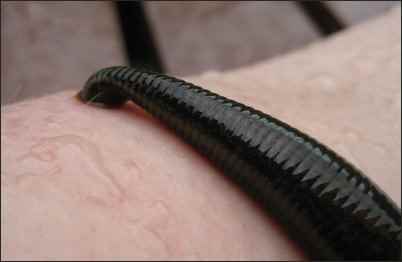 Our modern term phlebotomy, which sounds so comfortingly clinical, is actually an old pseudo-scientific term meaning “blood-letting” (today, a phlebotomist is a trained person who extracts blood for testing). You’ve doubtless heard of leeching, that is letting a leech suck your blood. A leech is horrible to look at, something like a shell-less snail, and is dear to the heart of bizarre movies in which somehow, people are trapped in a swamp and forced the navigate on foot through scummy water, filled with the slimy critters that invariably attack the hero. But the leech’s stinging bite and appetite for blood is capable of reducing high fevers. People used to volunteer to be leeched.  Leeches can drain off up to 1/5 of your blood without otherwise harming you.  Leeching was used for minor illnesses like sore throat, right on up to bubonic plague.  And… yucky though it is, leeching is still used today, in rare cases.

Mercury, totally rejected by moderns as a medication, used to be prescribed freely for–get this–helping people live longer. Mercury was found in the tombs of the pharaohs.  One was said to lie on a mattress suspend over a pool of mercury. Before the development of modern antibiotics and sulfa drugs, mercury was the treatment for the dreaded sexually transmitted disease, syphilis. A famous example of mercury treatment for sexually transmitted disease is Isak Dinesen (the pen name of Baroness von Blixen-Fineke) who wrote the book-that-became-a-movie-with-Robert-Redford-and-Meryl-Streep, Out of Africa.  Back in the early 1900s, Dinesen contracted syphilis from her unfaithful husband and endured extremely debilitating mercury dosing for many years before being pronounced cured.  Lots of us have mercury in our teeth, as part of our silver fillings. And it has scientific and, even now, medical uses, but they are getting fewer all the time.  But it used to be considered a cure-all.

Animal poop has long been said to have curative powers. Cow manure is a cure, it seems, for skin ailments and open wounds. In our childhood, our elders would slap cow manure on infected wounds, would use it to “draw out” poisons or actual objects, for treatment of burns, and as an actual skin improver.  According to Dr. Kesari Gumat, a researcher based out of Ahmedabad, India, walking on cow manure can kill germs and bacteria and heal wounds.  Moreover, rubbing cow manure on your skin can get rid of dry skin and improve blood circulation. Dr. Kesari Gumat and fellow researchers are also encouraged by the potential benefits of using cow manure to treat cancer.

I was told by Indians in a Gandhi-based project that cow manure was not harmful, in fact it was a useful fuel; and thus I got to participate in a poop-patty party, collecting the fresh product and shaping it into burnable cakes.  And I learned recently that some naturists recommend the poop of exotic birds such as larks and nightingales for facials. Japanese geishas were said to have used this “lotion” to excellent effect.

Nicotine.  There was no doubt what my father or grandfather would do if I got a bee sting. Out would come the cigarette pack or the tin of chaw, and a small poultice would be slapped on the sting as quickly as possible. I can attest, as can doubtless millions of other children of “the smoking era,” to the efficacy of this method.  The pain immediately subsided, the swelling went down almost at once.  When you removed the gooey glob of brown from the wound, maybe an hour later, you could see the bee’s stinger popping out of the entry site. The tobacco drew out the sting, literally. No one is willing to give tobacco any credit these days, even though nicotine has been used medically for a ages, and is now sneaking back into vogue as a medicine, since it has been revealed that former smokers may have less susceptibility to Alzheimer’s. Nicotine has been shown to reduce depression and improve cognition, even to enhance blood flow. But that is not when nicotine is taken in smoke form. Smoking is bad for you. Let me repeat that. Smoking is bad for you. But nicotine may have more healing powers than our grandparents suspected. It’s not just for bee stings anymore.

You may not know that your grandma or great-grandma might well have recommended mare’s milk for whooping cough.  Having been taught by the health-food underground that dairy products were never to be ingested for any sort of cold or croup, I find this remedy suspect, but I can’t help wonder what properties mare’s milk might possess that gave it that reputation as a medicine—antibodies, perhaps? Would that which protects a growing colt also protect a growing human baby with a life-threatening disease?

By the way, if you think that drinking mare’s milk is weird, remember that some modern women ingest pregnant horse urine. Premarin, a medication widely prescribed for the unpleasant symptoms of menopause, is none other than PREgnant MAre’s urINe. Against the protest of animal rights activists, this liquid, full of estrogen, is extracted from equine females housed together just for that purpose. Estrogen, our most significant female hormone, is abundant in mare’s pee, and purportedly replaces our supply when the body no longer manufactures it.  One can’t help but wonder if modern researchers went back to folk medicine sources to develop this wonder drug.

Some Middle Eastern women drink camel’s urine, convinced it has the power to ward off any number of diseases. But by the reports I have seen, it is mighty hard to get down.

And wouldn’t any urine be, taken straight? Well, maybe, but… perhaps one of the strangest medicines, used both inside and outside the body, is HUMAN urine. This is not a new thing. A few years ago I read about an unusually pretty English actress who swears by not only drinking her urine (daily) but also bathing in it.

Voluntary, health-related human-urine use for health and beauty is an ancient practice.

So let’s examine this human-urine healing phenomena carefully. First: drinking your own urine. Significantly, drinking your pee can save you, temporarily at least, if you run out of water in the wilderness.  But the solution would not, obviously, be lasting, because you would continually “refine” your urine as you drank it, and have less liquid to sustain yourself with each time, and more salts and poisons that lodge in urine, that your body is trying constantly to get rid of. However, drinking your urine regularly, not as an emergency measure, would yield different results. If there are beneficial “ingredients” in your pee, then maybe you should drink it. Many people believe that urine contains infection-fighting agents (see mare’s milk and urine, above) and that your own urine can even prevent cancer.

How about using urine topically? Old as the hills. We moderns call it uroptherapy and may even pay large bucks for a uro-soak at an exclusive spa. Since pee is mostly water, with the rest being a combination of minerals and enzymes, some of which you have produced yourself, what can it do for you? Uro-experts swear it can get rid of psoriasis, acne, and eczema. “Morning urine is said to be the best as a facial treatment because the hormones are said to build up overnight, according to Flora Peschek-Böhmer and Gisela Schreiber, authors of Urine Therapy: Nature’s Elixir for Good Health”. 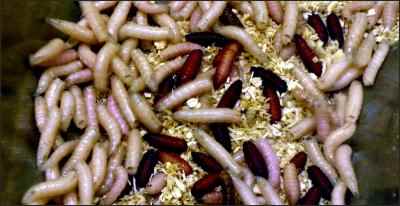 Okay, now let’s talk worms. Specifically, the larvae of the blow-fly, noted for its appetite for necrotic (dead) tissue.

Maggots are an age-old healer, their use going back to the Mayans. Beyond a doubt, our grands and great-grands would have heard of maggot therapy and probably knew of people who had had it. Pre-penicillin, maggots were commonly used in the U.S., so most people were familiar with the treatment, in which maggots were placed in wounds to ward off infection. Blow-fly maggots feast on bacteria, including dead and dying tissue.  A wounded soldier in the Civil War would have welcomed maggots if they could save a gangrenous limb from amputation. In fact, warfare and the urgency of immediate care for the wounded in remote areas has kept maggot therapy going into modern times.

Maggot therapy is still employed these days, enjoying a resurgence, in fact, because there have been so many problems with bacteria that have become resistant to antibiotics. Those who have been treated by maggots report “no yuck-factor.” People with very serious, slow-healing wounds and pressure ulcers are better treated with maggots than with other standard therapies. The reliable source, Scholastic, states that “about 5,000 laboratory grown and disinfected (microorganism free) maggots are delivered to hospitals across the U.S. every week!”

Up to the mid-1900s, a lot of Americans still believed firmly in folk remedies, taken from the simple natural ingredients immediately around them: bark, berries, insects, animals. It took television and radio to convince us gradually to turn to more modern methods that were certainly easier to take and often far more effective. But even television and radio still advertised without shame for the potions and nostrums that were said to improve health… some filled with ingredients that today are high on the controlled substance list. How effective these made-up cures were, and what happened to the innocent people who used them and the not so innocent people who manufactured them, will be the subject of the next chapter of folkways medicines in America

Medical Folkways in America – Part Two: What’s in Your Bottle?
Composting with Worms: They Wiggle While They Work