Make Your Own Fermented Drinks

Home /Food/Make Your Own Fermented Drinks 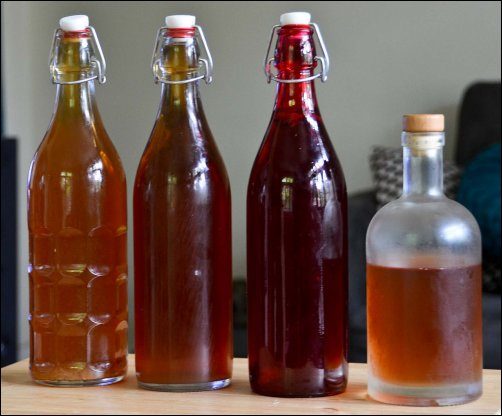 After waging war on all the germs and bacteria we know are lurking around us, people are finally beginning to understand that some bacteria is actually beneficial.  In fact, bacteria help in everything from digestion and maintaining a healthy immune system to producing neurotransmitters and keeping depression at bay.  Ninety-percent of our cells are actually bacteria!  As people learn more about the importance of maintaining healthy bacteria, they begin to understand the importance of eating and drinking traditional, fermented foods and beverages.  We have discussed fermented food before but now let’s look at the beverages.  Unfortunately, buying fermented drinks at the store can set you back $5.00 a bottle or more, but making your own fermented drinks is a very cost effective way to improve your health and to avoid sticker shock at the grocery store!

Make Your Own Kombucha

Long life, an end to all health ailments, great physical beauty… perhaps even the chance to become a millionaire?  Okay, perhaps kombucha can’t deliver on all of these wild claims but it does offer myriad health benefits and a yummy, fizzy taste!

Kombucha (also known as booch, mushroom tea, or the “Remedy for Immortality”) is fermented, sweet, black tea that started in the Tsin Dynasty of China in 221 B.C. and was then brought to the Japanese Emperor Inkyo by a doctor named Kombu as a cure for digestive problems.  From there it traveled to Russia, India, and other Asian countries and on to Europe.  The drink is fermented by a “mother” culture, a light brown, gelatinous disk (my friend says it looks “placental”).  The mother, or starter, is called a SCOBY, which stands for “Symbiotic Colony of Bacteria and Yeast”—it’s a living organism!

I know, I know, this description doesn’t sound exactly appetizing, but I promise it really is!  It tastes a bit like a delicious apple cider with a sparkly, fun fizziness.  It also has so many health benefits that it’s worthwhile to acquire a taste for it.

The scoby is like a small lily pad floating on top of or within the kombucha tea.  Technically, it is classified as a fungus.  The constituents in individual scobys vary but most contain acetic acid bacteria, Gluconacetobacter kombuchae,  lactobacillus, and pediococcus.  These last two produce lactic acid and the gelatinous membrane that holds the colony together.  As for the yeast part of the colony, the most common are saccharomyces, Schizosaccharomyces pombe, Brettanomyces, and Zygosaccharomyces kombuchaensis.

It’s difficult nowadays to create your own scoby.  Previously, you could grow one from a bottle of store-bought kombucha.  However, commercial kombucha is now pasteurized, which destroys the bacteria and yeast needed to form a new colony.  It is easiest to get a scoby and starter tea from another brewer (look on Facebook, Craigslist, or freecycle if you don’t know a brewer) or from an online source such as Cultures for Health or Amazon.

Kombucha’s greatest benefit is that it provides beneficial bacteria, which, in turn, strengthens the immune system and helps to fight off “bad bacteria” and viruses.  Keep in mind that 75 to 80% of your immunity is found in your gut!  Kombucha also helps to protect cells and organs.  It contains lactobacillus acidophilus (the same strain found in yogurt) and a dozen more strains as well as vitamins (particularly C, E, and the B group), acids, and enzymes. 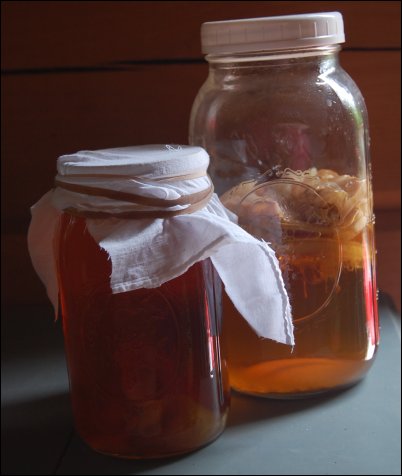 Additionally, it helps to protect and detoxify the organs because it is high in glucaric acid, which is particularly beneficial to the liver.  Glucaric acid is formed during the oxidation of glucose and it can remove toxins such as pesticides and plastics from the liver by shunting phenols to the kidneys.  Glucaric acid is also a powerful antioxidant and cellular detoxifier.  Another side benefit of glucaric acid is that it produces glucosamines, which help to replenish joint fluid and cartilage, thus reducing the symptoms of arthritis.

Kombucha is a great tonic because it supports the body and helps it to function as it should.  Some other possible health benefits are greater energy due to the iron kombucha draws from the black tea; greater digestion as kombucha protects the lining of the stomach and intestines boosting metabolism; and an easing of anxiety and depression, as the amino acids and vitamins found in kombucha help the nervous system to function more smoothly.

There are slight variations in recipes for making kombucha but here is the one that has been successful for me:

Make Your Own Kefir

The name kefir comes from a Turkish word meaning “good feeling” and has long been used in Asia and Europe.  Like kombucha, it contains a powerhouse of probiotics, including various strains of lactobacillus, bifidobacteria, acetobacter, and leuconostoc.  And also like kombucha, it contains many easily absorbed nutrients such as calcium and magnesium (which work together), B vitamins, and K2.  You might think about sticking with yogurt, but kefir has around 35 strains of beneficial bacteria whereas yogurt has one to five strains and most of them do not manage to colonize in your digestive tract.

The kefir culture is called kefir grains but they do not contain actual grain.  Rather, they resemble small, golden, gelatinous cauliflowers and are composed of bacteria and yeast that are clumped around the milk proteins called casein.  The taste is similar to yogurt but tarter and slightly effervescent.

Traditionally, kefir was made in a skin bag that hung by the door so that it could be gently shaken by people coming and going and the grains would mix well with the milk.  There isn’t a way to make/grow grains yourself but since the grains multiply quickly, you should be able to find someone to share some with you or, again, you can order them online.

For modern fermenting, place about one teaspoon of kefir grains in a glass jar and pour one quart of milk over them.  Cover them with a breathable top; in twelve hours the consistency will be more milk-like, in 24 hours it will be closer to yogurt.  Strain the grains and place them in a fresh batch of milk.  Raw, whole milk is best and “regular” whole milk is second best.  They can even ferment in lower-fat milks or coconut milk, but they won’t multiply as well, so, it’s best to keep some grains in whole milk so you can start anew when needed.  The grains will usually multiply, in which case, you can store the extra covered in milk in the fridge, use it to make more kefir, share it with other potential brewers, or feed it to the livestock.

Water kefir is brewed in a similar way and lends itself to more flavoring.  Take water kefir grains and add them to cooled sugar water (¼ cup sugar per quart of water).  Leave at room temperature for 24 to 48 hours and then strain the grains and start over.  The remaining kefir water can be flavored with juices and herbal teas.

Make Your Own Beet Kvass, Jun, or Ginger Bug

Other fermented drinks include jun, ginger bug, and beet kvass.  Jun is known as the “champagne of kombucha”; it, too, is made from a scoby but the colony feeds on green tea and honey instead of black tea and white sugar (and no, they’re not interchangeable).  Jun is milder in taste and is quicker to ferment, but, because of the honey, it’s more costly to brew.

Brewing jun is similar to kombucha but you use six to seven cups of water, ½ cup of honey, two teaspoons of green tea, ½ cup of starter, and one scoby to make a half gallon of jun.  Jun’s benefits are similar to kombucha.  One thing to keep in mind is that jun has a higher alcohol content than kombucha.  Kombucha is about .5% whereas Jun is around 2%; places that sell jun commercially have to have a liquor license to sell it.

Known as ginger bug, a colony of beneficial bacteria can be created by fermenting ginger root in sugar water.  Ginger bug can be used as a base for homemade sodas and digestive drinks such as homemade ginger ale (of course!).  Peel and grate or chop a ginger root so that you have about three tablespoons (about 1.5 inch piece).  Mix three tablespoons of white sugar with two cups of water and pour over the ginger.  For five days, stir the mixture daily and add one tablespoon of grated ginger and one tablespoon of sugar.  Bubbles should form at the top, it should fizz when stirred, and it will smell sweet and “yeasty”.  Continue to eight days of fermentation if these “symptoms” do not occur.  Strain the culture or “mash” and the drink can be added to herbal teas, diluted fruit juices, or even other fermented drinks.  Add one tablespoon of the mash to a new batch to help it get started more quickly.  If you want to save the mash for later, continue to feed it one teaspoon of ginger and one teaspoon of sugar daily or place it in the fridge and feed it once a week.

Beet kvass is another fermented drink that is popular in Ukraine and Russia.  It is often used in soups like borscht or in salad dressings.  I do not have personal experience with it but it is described as “earthy” (which makes sense, since beets are described in a similar way).  The beautifully colored drink is purported to cleanse the blood, to support the liver, and to aid digestion.

To make the kvass, wash, peel, and chop two to four beets and place them in a half-gallon glass jar.  Add ¼ cup of whey or juice from sauerkraut and one tablespoon of salt.  Fill the jar with water and cover with a breathable top.  Leave it at room temperature for two days and then move it to the fridge.

There are some cautions to keep in mind when becoming a fermented drink brewer.  Start consumption off slowly, especially if you’re not used to eating fermented foods and drinks or have not been taking probiotics.  Keep in mind that some people experience “detox” symptoms—perhaps a few days of mild headaches, a rash, or a flare-up of any health problems you already have.  This is normal and will pass in a few days.  Also, like canning your own food, be sure to have a clean workspace and sterilized utensils and jars.

Reclaim Your Health with Raw Milk