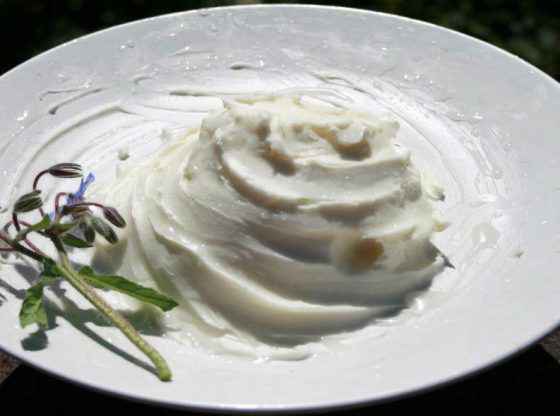 The first thing to do before learning to make goat milk butter is, of course, milk your adorable little goaties.  I used to scoff at people who baby-talked to their animals, and now that silly babble is my favorite part of milking.

“Oooh, who are the best little golden goaties EVER?” I croon to Honey, Freya, Fat Pumpkin, and Figgy Pudding as they jump onto their milking stands.

I milk two Nigerian Dwarf goats, each smaller than a Labrador retriever dog.  These particular goats give little milk—a quart apiece at the height of their lactation—but the milk has almost 8% fat.  Whole cow milk hovers around 4%.  On my homestead, I’m hungry for fat.  Fat makes butter, and butter is good.  We are eating only what we can grow and harvest by hand, so animals who convert blackberry brambles into cream are worth their keep.  The Nigerians stay in vibrant good condition eating just what we can grow and gather around the farm, no grain required.  I also have two high-producing LaMancha goats.  Their milk is pleasantly rich but doesn’t develop as thick a layer of cream on it.  My two LaManchas, bless their bucket-filling ways, do better if I feed them grain during the peak of their lactations.  Grain is a convenient high-calorie supplement for them during the winter and spring before the garden kicks into high gear.  For the summer and into the fall, milk production increases when each goat gets a giant overgrown zucchini from the garden.  It’s cheaper and easier to grow zucchini than to grow or buy grain.  If I had to raise goats without the benefit of an awesome feed store just down the road from me, I would keep the Nigerians and rethink the LaManchas.  It would be a full-time job keeping those big girls fed through the winter without a handy bale of alfalfa hay.

In case you were wondering, feeding grain does not necessarily increase the fat content of milk.  Digesting fiber is what puts fat in the milk, and there is plenty of fiber in the weeds and grasses of our farm.  During our growing season, from April to October, the goats eat essentially only what we grow here on our few acres.  The goats’ appetite for brambles and weeds inspires us to keep the homestead groomed.  My uncle stopped by with a bucket of weeds from his garden patch, shaking his head.

“I meant to weed these beds last week,” he said, “but I waited until the weeds got big enough for the goats to eat!”

Now that you know how to produce high-fat milk from your goats, what about butter? During our year-long hand-harvested food challenge, butter would be a real treat.  Chicken fat is fantastic, but it’s a little weird to spread on a piece of cornbread.  I had heard that butter comes only from cow milk.  Would it make sense for me to get my own cow?

“Butter on your popcorn,” said our farm-mate T-bone.

So I went out and bought a Guernsey cow.  Eight-feet long and weighing half a ton, she ate a lot more than my goats.  She didn’t give a lot more milk, though.  It took her about two weeks to eat the pasture that sustains my goats all summer.  Did I really have to do all this work (and buy a lot more feed, and wash the milking machine this cow required) just to get a bit of butter?

Then I got a tip from Gianaclis Caldwell, dairywoman extraordinaire, in her excellent book The Small-Scale Dairy.  This tip changed my life since it let me sell my butter-making cow, and stick with small, easy-to-feed goats.  Don’t get me wrong, I would gladly have a cow again someday, but it’s nice to be able to get at least a small amount of butter without having a huge cow.

Yes, I said “a small amount of butter.” It’s true that the fat in goat milk does not rise as quickly or completely as the fat in cow milk.  Given the same amounts of cow and goat milk, I can make less butter from the goat milk even if the goat milk has a higher total fat content.  Oh well.  The upside is that goat milk, even skimmed of its cream, has enough fat left in it to make creamy yogurt or a hard cheese that does not rely on a lot of fat for its texture.  Parmesan, for example, is made with partly skimmed milk.  I make a mean hard cheese from skimmed goat milk.  It’s loaded with flavor after being aged for six months.  Making butter from goat milk, then, yields both short-term and long-term satisfaction.

Here are the steps to making goat milk butter.

My four goats, as of this writing, give me about 12 gallons of milk a week.  I skim off a quart and a half of cream from that amount.  This cream yields about a pound of butter.  If we had more than a pound of butter a week, I am sure our household of butter-lovers would eat it!  Having one pound is better than none, though.  Many cream-skimming instructions urge you to let the milk sit in shallow containers.  I use half-gallon jars, which concentrate the cream in a smaller surface area.  I find it easier to skim this way.  The fat content from goats varies, both between goats and during the course of their lactations.  By the time my Nigerians are nine months into their milking period, I’m practically squirting pure light cream right out of them.  Another fat-saving hint—during each milking session, the first milk from each animal has less fat than the last milk I get out of her udder.  If the barn cats are going to get any milk, it’s the first stuff I squirt, not the creamy last pint.

2)    Refrigerate the milk for four days.

Time is not always kind to goat dairy, so I want to get the fat off the milk as soon as practicable.  Some people are more sensitive to the goaty flavors of old milk than others.  For some people that tang is part of goat milk’s allure!

Letting the milk sit in the fridge longer than four days means thicker cream, but less than two days means there will hardly be any cream worth skimming.  Four days is a happy medium.  I used to chill the milk in a cooler with ice water but found that I could get away with simply putting the jars directly in the fridge.  My ladies have never had a goaty taste in their milk, but this can vary significantly between animals.  If your milk tastes unpleasant, try chilling it quickly after milking, in an ice-water bath.  If you buy milk, it may already have sat for this long and be ready to skim.

3)    When you skim the cream from four-day-old milk, put it in the freezer in a quart-or-larger container.

I use a big peanut butter jar, about a quart and a half, because that is as much cream as will fit in the kitchen mixer I use to churn butter.  I get about a quarter cup of cream from each half-gallon jar.  Yes, it seems like a tiny bit of cream in a big jar, but just let it build up over time!  I have one precious ladle that is just the right size to fit inside the wide-mouth jar and lift out that thick cream.  Skim all the jars before you lick the ladle, of course.  While cow milk forms a distinct “cream line” between the cream and the skim milk, it’s less distinct with goat milk.  You will notice a visual change in texture between the thicker cream and the watery milk.  As I said, I rarely get more than a quarter of a cup of cream per half-gallon of milk.  Those goats are tiny but mighty when it comes to producing fat.

4)    Add cream to your freezer container as you can skim it from milk in the fridge.

As you gather and save cream over the course of a week, a little glacier of cream will build up in your freezer jar.  I like to add only really thick cream, which means a higher yield of butter from the cream I have saved.  Plus, then enough creaminess is left behind in the milk that rest of the household milk-drinkers don’t complain that I have stolen all their fat.

5)    When your jar in the freezer is full, thaw and make butter.

I like my goat butter uncultured, or sweet, but you could add kefir or another culture and let the cream ripen before churning.  The main trouble with churning goat cream, cultured or not, is that it is so delicious I have been known to halt the butter-making process and just eat the bowl full of whipped cream before it turned to butter.  All my goat butter has had a mild and delicious nuttiness, like a temperate-zone equivalent of coconut oil.  Goat butter is white.  You could camouflage it in a Crisco jar.

For those who haven’t made butter before, my technique is to use my ancient KitchenAid mixer. Into the bowl goes the cream I thawed the night before.  I use the whisk attachment on a medium-high speed.  I learned to drape a kitchen towel over the mixer because when the cream turns suddenly to butter, there can be a lot of splashing buttermilk.  The cream usually takes just a few minutes of churning to turn to butter.  Don’t step too far away from the kitchen during this time.  Once the butter starts separating, I turn the mixer down to its lowest setting to gently consolidate the butter crumbs instead of splashing them all over the kitchen counter.  For whatever reason, goat butter has consistently churned faster for me than my cow butter did.  Maybe it’s because of the freezing, which gives a grainy texture that may help the fat globules stick together.

Once the cream has separated into butter and buttermilk, I rinse the butter in cold water, massage in a pinch of fine sea salt to the pound of butter, and press it into a pint jar.  That’s our butter for the week!  I drink the buttermilk myself or give it to the chickens.

A big crusty loaf of cornbread from corn grown in the backyard, and a gleaming spoonful of goat butter—this is bliss.  See what kind of blackberry-transforming alchemy your goats can do.  It helps, of course, to baby talk to them.

A Homesteader’s Guide to Covid-19 Coronavirus: This is Not a Drill
Adam vs. the Post Pounder