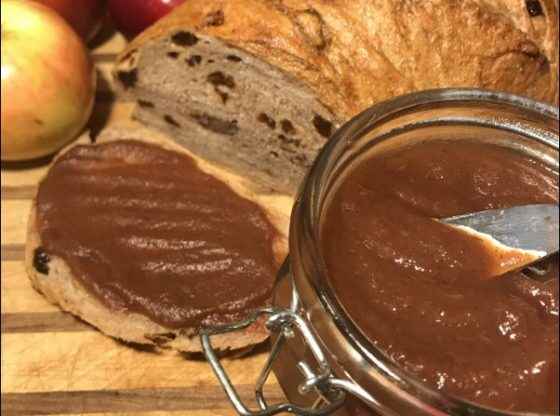 I decided I’d try something I’ve never attempted before and make some fresh apple butter for this week’s recipe. And, folks, I’ve got to tell you, it was one of the easiest things I’ve ever made. It’s not quick, mind you, and I used a slow-cooker, making the process even longer, but it was so worth the wait… and that’s about the hardest part of it, the waiting. I took a trip to a local orchard and told the nice ladies running the store my plan. They pointed me toward a half-bushel bag of Jonathan apple “seconds”. I assumed from the name that these were the undesirables of the orchard, but there was only one in the whole, huge (I’d guess twenty-five-pound) bag that was too bruised to have just eaten raw. I paid only about ten bucks for that half-bushel bag, and ended up (after two batches in my six-quart crockpot) with about six quarts of sweet, spiced, spreadably-smooth apple butter. And I can’t say enough how easy it was! It’s definitely something I’ll add to my fall traditions and I hope you will, too.

Here’s what you’ll need (for one batch in a six-quart slow-cooker):

Fill the slow cooker to the top with sliced apples, making sure the lid still fits snugly. Sprinkle the other ingredients on top and stir a little to spread it around. This isn’t precise or even, so don’t worry about it too much, it will all cook down just fine.

Turn the slow cooker on low and cook for 8-10 hours, stirring occasionally. Once the apples are completely soft and bubbling, blend until smooth with an immersion blender, or in batches in a regular blender or food processor (What you have now is basically applesauce). Once smooth, allow to simmer another 2-3 hours with the lid cracked slightly for steam to vent. It will thicken up over time. Turn it off when it’s your desired consistency and taste for sugar.

That’s it! Store in an airtight container in the fridge or put in canning jars and process in a hot-water bath for longer keeping. Try it on my Cranberry Orange Walnut Bread.

Highland Cattle: A Breed Apart
Housekeeping in 1879, by the Book