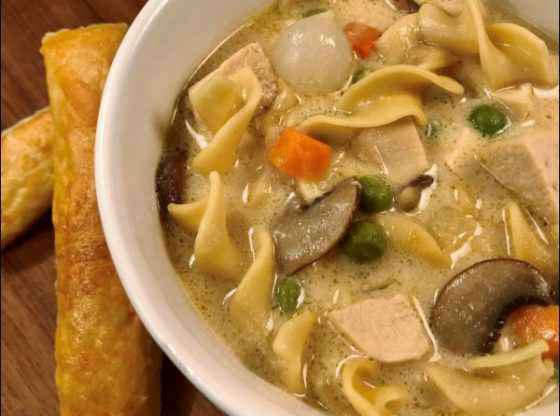 One thing my long-time readers might know about me is how much I love soup.  I love eating soup, making soup, and dreaming up new things to turn into soup.  This Chicken Pot Pie Soup recipe is a perfect example.  My personal experience with pot pies tells me that they often come frozen in a tiny cardboard box or made from scratch in someone’s grandma’s kitchen.  While I’ve never made a pot pie, I have made a handful of fruit pies, and I’ve found they can be pretty temperamental.  The filling oozes out all over the place, or it shrinks down too much leaving you with a deflated pie; the top crust looks beautifully browned, yet the bottom crust is underdone and soggy… those are just a couple of the problems I’ve run into.  I’ve been craving chicken pot pie, but I didn’t want the tiny frozen version and I don’t have access to anyone’s pie-baking grandma; sounds like a soup makeover is a perfect solution.  We’ll even add puff-pastry sticks so we don’t miss that flaky crust.

First, preheat the oven to 350.  Cut the pastry in half and then into 1-inch strips.  Line a baking sheet with parchment or silicone mats, or spray with cooking spray.  Brush the tops with the egg wash and bake for 10-20 minutes, checking every few minutes after 10, until golden brown.  Remove from the oven and set aside to cool.

Meanwhile, in a large skillet, melt a tablespoon of the butter over medium heat.  Add the mushrooms and a pinch of salt.  Let the mushrooms cook for 10 minutes or so until they’ve lost most of their moisture and have shrunken in size.  Remove them from the pan and set aside.

In the same skillet, melt the rest of the butter and add the onion and celery and sauté until soft, 5-10 minutes.  Next, sprinkle in the flour (I use a tiny mesh strainer as a sifter) into the pan and stir until there are no lumps.  Cook about 3-4 minutes, just to cook the rawness out of the flour, but not so much to make a dark roux.  The mixture will be pasty.  Slowly pour in the half & half, stirring as you go, again, making sure you don’t have any lumps.

Now, with a spatula, thoroughly scrape the mixture out into a large pot or Dutch oven.  Turn the heat to medium and stir in the chicken stock (I used a whisk to get rid of any lumps that snuck through).  Bring the pot to a boil, and then reduce to a simmer.  Let it simmer for 20 minutes or so to allow the “gravy” to thicken a bit.