The Secret of Inpangela: Guinea Fowl are Strong Magic for Your Homestead 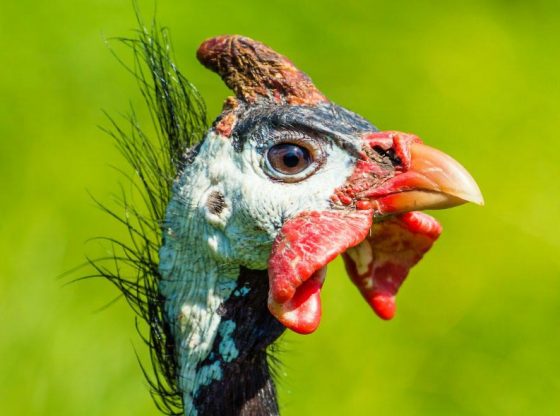 The Secret Magic of Inpangela

Man does not live by egg alone. While we may keep chickens on the homestead for eggs or even meat, we must also consider the spiritual health of our land, our animals, and ourselves. For this, we turn to the little known and less understood Guinea Fowl. This bird has come to us over many thousands of years of tradition without transformation. They bless wherever they stay with protection and fertility.

For hundreds of years, Zulu Queens and Sjangane Chiefs tried to breed the Crested Guinea Fowl with the local chickens in order to make the chickens stronger, more alert, and more drought-tolerant. All of their efforts failed because guinea fowl will never allow themselves to become fully domesticated. Like the cats who carried the spirit of the gods to the Egyptians (and still remain aloof today), guinea fowl exist on a plane of reality that intersects with that of humans but never conforms.

Known in sub-Saharan Africa as inpangela, or, “one who is in a hurry”, the guinea hen is a symbol of industriousness. Inpangela comes from the verb pangela which means, “to wake up in the morning and go to work.” She is alert to every risk and opportunity. She is an early riser, ready for the day ahead.

In the old language of Botswana, Setswana, the name for the guinea fowl is kgaka which indicates a creature who is always exerting an effort. If I say to you in Setswanan, “Gehgaketsi.” it means, “I am running like a guinea fowl making an effort.” There is no word like this for chicken. Only the guinea fowl carries this meaning.

Why do we call them “Guinea Fowl?” It is because they came to Europe from the Guinea coast of Africa, much like we call porcelain from China simply “china”. But, make no mistake, they have come to us from far deeper in the jungle than just the coast. Inpangela lived deep in the jungle for thousands of years. The calls that accompanied (and often frightened) the first European explorers were those of Inpangela. As the Europeans slugged through the jungle the natives would move out of sight being warned and alerted by the ever-vigilant Inpangela.

Natives in both North and South America knew the guinea fowl as well. Guineas came across the ocean on the earliest explorations from the Old World in the 1500s. Once released, they thrived on the new continent. Native American tribes saw them as great protectors. A single feather would bring comfort and protection to a warrior. Everywhere the guinea hen has gone, she has been recognized for her willingness to stay alert, work hard, and confront danger.

What Guinea Fowl Bring to Your Homestead

Before industry, before science, before writing, there was knowledge born from first-hand witnesses of simple cause and effect over generations. Mothers watched their mothers and brought the lessons down to their daughters. In serious and solemn tones they would say, “Inpangela are gifted with powers from the gods to protect our chickens from disease.”

How can this possibly be true? Guineas eat bugs, ticks, parasites, and all manner of sickness-causing creatures. Their magic power for healing is born from their industry and hard work. The mothers did not know this, they only saw the effect and accepted it as true.

After witnessing through clear eyes, the women observed that when a land lost its fertility, the guinea fowl would be the first to move away. Following them, the villagers would find fresh areas to plant their small crops and fresh forests to gather their meat and herbs. Today we cannot just move our homestead to a new area, so we must observe and be like the inpangela: vigilant to keep our land fertile so as to protect our animals from predators and disease.

The guineas are serial monogamists. If given the opportunity they will create a strong pair-bond that can last a lifetime. They are only polygamous if kept in captivity in large numbers. It is very difficult to tell the gender of a guinea; only through careful observation of behaviors, and distinction of the calls from one bird to another, can you know the sex. This is difficult when they are contained like chickens, but fun when they are allowed to live their true purpose in life in the open areas of your homestead.

This is also true of homesteaders. The open space we live in creates peace and stronger relationships with those we love, while cities press people together causing stress, strife, and poor decisions. Guineas thrive in freedom on our homesteads for the same reasons we do.

You may find and eat guinea eggs, or, they incubate the same as chicken eggs if you wish to reproduce them. Whatever you do, I recommend you allow some fowl to exercise their spirit to protect, bring fertility, and create an industrious homestead by letting them run and fly free.  They will roost in your trees or on your rooftops. They will nest on the ground in a quiet area of their own choosing. They will alert you to dangers, chase off snakes, and provide a limitless stream of entertainment.

Provide your guinea with a safe place to which to retreat if they like. Inpangela are hearty birds who can mostly take care of themselves, but like us, they do enjoy easy feed, a comfortable bed away from predators, and a break from the cold winter wind. If given a home they will always stay close to your homestead. Once they get used to their home you can give them a high place to enter and leave the coop. This will allow them to use their natural ability of flight to their advantage and to the disadvantage of predators.

Bring Inpangela Magic to Your Homestead

We mirror that with which we surround ourselves. Guineas are active, always interested in ways to be useful. They rise early, eager to do their duty, happy to fill their role. In a world that often reflects discord, disgruntlement, and a desire to be “anywhere but here”, the guinea reminds us that we can be joyful in our role as we choose to protect, to provide, to enliven those around us… to bring them health and safety. They demonstrate to us how to search out new fertile fields and remind us to keep our own fields fertile and vibrant as well.

The inpangela is magic which comes to us over centuries and thousands of miles. They carry the spirit of the homestead in their heritage and in their daily actions. Consider adding this good magic to your homestead… you will be rewarded for it.

Miracle Guineas: The Book Was Wrong

49 Ways to Save Money on Groceries
Manna From On High: The High-Altitude Homesteader Bakes