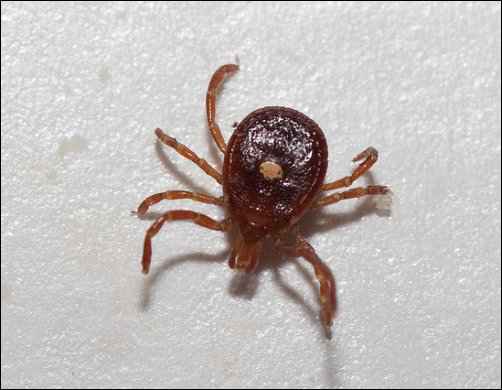 I wish I knew how many thousands of dollars ticks have cost me.

And the worst part is, they weren’t even MY ticks.  I used to be a rural real-estate broker in southern Missouri, you see.

Sometime I ought to tell you about how many people buy a parcel of land, then, when they come to camp on it for the first time, find themselves coated head to toe with ticks.  This seemed especially true of those clients hailing from A Large Western State.

I think that these dear souls, in particular, must immediately decide that living in the forest means being constantly consumed by ticks, and that we poor rubes just don’t know any better.

Well, I have to admit that, when it comes to Not Knowing Any Better on most subjects, the Ozarks can field a team whose world-class naiveté is a match for any region on earth.  However, if there’s anything, ANYTHING Ozarkers know, it’s ticks… and the avoidance of same.

The other day, I happened to pick up a gardening magazine and I stumbled across an article written by a physician regarding protecting oneself from ticks.

This, in itself was not so remarkable, but as I read on, it became apparent that I was holding in my hands a manuscript of potential importance to literary collectors.

Difficult as it may be comprehend, this learned author, who was apparently getting PAID, managed to perpetuate as truth, two out of three of the Most Common Silly Myths About Ticks that are generally held by the tick-feeding public of today.

You can only imagine my elation.  I’d been meaning to write something for our website about ticks for months, but I was looking for an interesting angle so as to avoid making just another dry recitation of tickfact.  What could possibly be more interesting than debunking myth, and who would be a better target for ridicule than a doctor?

I am, of course, ever mindful of the fact that doctors often consort with attorneys, so I don’t intend to mention any names.

Out here in the woods, we don’t know too much about leeches or liposuction or any of those with-it new medical procedures, but gee-golly, do we know something about TICKS! …and I’m just itching to tell you about ’em.

Let’s start out with these Three Common Silly Myths about Ticks:

MYTH No. 1: When visiting the home of the tick, leave as little skin exposed as possible, wearing long sleeved shirts and long pants tucked into your socks.

I love this one.  A few weeks ago, I had the luck to run into a young woman on an river outing.  Meeting this girl was like old times for me because I started out in the real estate business catering primarily to the readers of the original Mother Earth News.  You can imagine then, my sense of deja vu to find standing before me, what appeared to be a perfectly preserved early-70’s-era Hippie Chick.  What was especially neat was that this was during that really hot spell we had back in July and she was wearing, I kid you not… long underwear.  I didn’t learn this because I asked, I assure you, but because over the course of the afternoon, she happened to mention it several times, usually in reference to the fact that she was sweating like a hog in a sauna.

She said it was to avoid ticks.

Had she ever SEEN a tick, I wondered.  I mean, if she, at maybe 5’3″ and 120 lbs.  Could get into her clothes, then why couldn’t someone who was less than a sixteenth of an inch long? It’s a good thing that ticks don’t have any sense of humor, because the laughter out in the woods would be deafening when they see fully grown homo sapiens wandering around in July wearing long sleeves and their pants tucked into their socks.

I told her that the best thing to wear for ticks was nothing.

She looked skeptical and suspicious of my motives.  I just hate how untrusting society has become.

MYTH No. 2: Ticks jump out of trees and land on you.

The same girl (I am NOT making her up) was wearing a sort of a sailor hat.  After I professed interest in her TAS (Tick Avoidance System) she volunteered that the hat was to protect her from the shower of ticks coming out of the trees.

Think about this.  The tick climbs up the tree (which has got to be the approximate equivalent to a human climbing the Washington Monument) then he sits patiently waiting for a victim.  Suddenly, YOU come wandering out of the underbrush fifty feet away.  The tick hastily calculates your mean velocity; your height in relation to his position in the tree; the speed and direction of the prevailing wind.  A hush falls over the forest.  Then, at precisely the correct moment, with a powerful spring of his spindly 1/32-inch legs, Thunder Tick launches himself, in a perfect triple-gainer, out of the tree and into your hair.

I’m disappointed that the doctor got this one right, knowing that ticks make their approach from below rather than above.  Phooey.

MYTH No. 3: Ticks must be removed very carefully.

Luckily for my purposes of ridicule, the doc goes on to tell us that we should never, never, ever remove ticks with our fingers.  Unfortunately, he doesn’t say why, but he does recommend using fine tweezers.

He goes on to say, “Don’t use alcohol, nail polish or petroleum jelly to remove ticks—it just makes them mad.  A provoked tick will attach itself more firmly to it’s host…”

“A provoked tick”—I marvel at the mere suggestion, as ticks in my experience have seemed rather passionless.  Perhaps this is where the term “ticked off” originates.  The Doc recommends you go home and shower after your tick exposure.  Again, he doesn’t exactly say why.  Certainly you’re not going to just WASH OFF any self-respecting tick.  They do this for a living, and they’re damned good at it.  It makes sense though, that if you’re not going to be removing your ticks (maybe you want to show them to your friends when you get home) you’ll want to make certain that they’re as clean as you are.

The article said the doctor was from New Jersey, but is suspect he is originally from A Large Western State.

The other day, I got into a tick discussion on a Usenet group.  Some poor babe was trying to find out how to AVOID ticks, and all the local experts seemed fixated on how to advise her to properly remove them once she’d been “tick-timized”.

My client seemed to favor trying to discourage the attached tick (she got dozens, of course) by burning them with a cigarette lighter.  This appeared to be a very painful solution and a very ineffectual one.  Maybe if you pulled the tick off with your fingers and THEN burned it.

Let’s get to the point here.  How do you spend a great deal of time in the Great Outdoors without being driven to distraction by ticks?

Here’s how ticks do business.  They climb up onto a tall stem of grass or a bush and wait until something warm and juicy, such as yourself, walks by and rubs against them.  When it does, they hop on.

Therefore, the number one best and most effective thing you can do to avoid ticks is to avoid tall grass.  At home, this is best done by mowing the lawn.  In the wild, it’s somewhat more difficult, but there are ways to lessen the impact of your tick-related experience.

Ticks do not immediately sink their choppers into your soft underbelly as might a Doberman Pinscher.  In fact, you might find that they’ll even wander around in your clothes for a few hours before selecting just the right spot from your lush display of anatomy.

That’s just one good reason not to wear a lot of clothes.

When you must walk through tall grass or any area that promises tickfulness, try wearing shorts so you can easily see any ticks that get on you.  Every so often, bend down and look to see if ticks are crawling up your legs.  If they are, simply flick them off and go on your way.

Grizzled old-timers think that anyone who uses insect repellent probably has lace on his shorts too, but a good repellent such as “Off” applied directly to your bare legs in conjunction with this frequent-check-and-flick routine is about as effective as any method you’ll find.  (Besides what’s wrong with lace?)

Nothing, however, is foolproof, so when you do get them, here’s the Noble Savage two-step technique for removing ticks:

1. Grasp the tick between the nails of your thumb and middle finger.

I think part of the reason that so many people may be squeamish about this technique is because, in the process of sucking your very delicious blood, the tick actually embeds his head inside your skin and when you pull him out, chances are the head stays behind.  This can cause more aggravated itching and, I imagine, increase one’s exposure to Lyme Disease.

I agree that you shouldn’t try unguents or fire to try to get the tick to let go.  Ticks very are slow to pick up on a hint, and you’ll just look silly in the process.  If you want to carry tweezers around with you, I guess that would work okay, but the most important thing is to get the tick as quickly as you can after he bites into you.  The longer he’s been ensconced, the more you’ll itch when he’s gone.  I’ve also read that if you screw the tick out counter-clockwise, you’ll remove him with his head intact.  This sounds a little off-the-wall, but I’ve tried it, and it does seem as though they don’t itch quite as much when you do.  Maybe.

You may note that I’ve not made a lot of comment about Lyme Disease.  I have to admit that for several years I suspected that the whole ailment had been invented by Newsweek.  I’m sure I’ve removed ten thousand ticks from my person in this lifetime, and in my experience the itch is the major down-side.  In recent years, however, my father, a confirmed tough-guy from way back, claims to have contracted the disease and if that’s what he said he had, I’ll not argue.  I’d just comment that the odds of NOT getting it are better than one is led to suppose.

In summary, ticks are a fact of life most everywhere there are mammals living outdoors.  Places that have more ticks tend to have fewer muggers.  You need to put things in perspective.

I’m From the Universe and I’m Here to Help