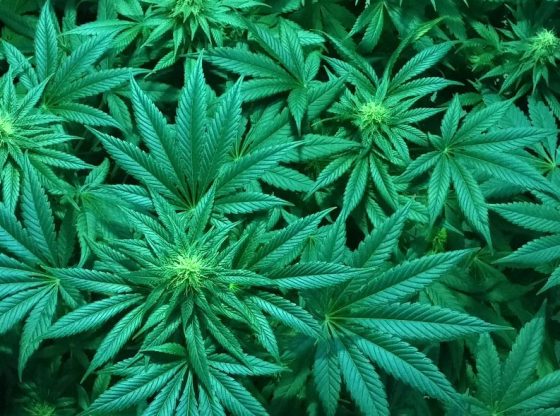 Cannabis hasn’t always been a controversial substance. In fact, it wasn’t until the early twentieth century, around the era of alcohol prohibition, that cannabis was widely perceived as a potentially dangerous substance that needed to be controlled.

Cannabis is indigenous to Central Asia and India and it was originally cultivated for use in textiles. It is easy to cultivate, fast-growing plant with strong fibers which made it attractive for rope, paper, and other textiles. When the psychoactive properties of cannabis were discovered isn’t clear. However, the plant, especially its seeds, was valued for therapeutic and medicinal uses such as rheumatic pain, intestinal constipation, disorders of the female reproductive system, and malaria in China as early as 2700 BC.

It was introduced to the Americas in the 1500s by the Spanish and again, the plant was primarily used for its strong fibers. For example, the U.S.S. Constitution was rigged with more than 120,000 pounds of hemp ropes. The plant’s psychoactive properties weren’t introduced to the west until the mid-19th century. Irish physician Sir William Brooke O’Shaughnessy was one of the people to introduce the cultivar to Britain.

Cannabis went in and out of popularity for the next several decades until the early 1900s when popular opinions formed about the plant vilifying it as an “evil weed.” By 1931, 29 states had made cannabis illegal and in 1937, the United States passed the Marijuana Tax Act that made it unaffordable and effectively illegal. In 1970, the Marijuana Tax Act was repealed and in its place possession of marijuana was criminalized by reclassifying it as a Schedule 1 controlled substance along with heroin, LSD, and ecstasy.

Now, the legalization of marijuana is being reconsidered around the globe. While it is largely still an illegal substance in most parts of the world, several countries and U.S. states no longer criminalize the possession of marijuana, others allow for its medical use and still, others are legalizing it for recreational use.

With changes in marijuana’s legal status, there is a growing interest in the substance and its uses. So, we will start with the basics about cannabis, its uses, an overview of growing it, a glimpse of the legal landscape, and some ideas for how it can be used, including a recipe for making Honey Ginger Cannabread.

So far, I’ve used the word Cannabis to discuss the history of the Cannabis plant family as a whole. Cannabis can be further classified into sativa or indica. Marijuana can be either sativa or indica while hemp is only sativa. Although hemp and marijuana have some similar features, they look very different. Hemp is vine-y and marijuana is bushy. However, the largest difference between the two is the number of cannabinoids each contains. Only Cannabis plants have these unique compounds.

Cannabinoids are the active chemicals in hemp and marijuana that act on the cannabinoid receptors in the body. Without getting too far into chemistry and biology, its enough to know there are two main ingredients in Cannabis – tetrahydrocannabinol (THC) and cannabidiol (CBD) – that have effects on the body.

Hemp is valued for industrial purposes as a strong fiber and high oil content. It contains CBD and only minute amounts of THC. It is primarily used for textiles, papers, biofuels, and cosmetics.  On the other hand, marijuana is abundant in THC. It also contains CBD, but it is largely grown for its THC content.

Both THC and CBD have medicinal and therapeutic uses, but THC also has psychoactive properties. For this reason, marijuana, not hemp, is classified as a Schedule 1 substance. Hemp is generally legal if its THC content is below 0.3 % in the U.S. and 0.2% in some countries.

Some people experience good reactions to THC like pain reduction, euphoria, increased appetite, improvements in anxiety, relaxation, and decreased nausea. Others have bad reactions to THC such as paranoia, memory loss, and poor judgment. Generally, most people will experience diminished reaction and coordination. Although CBD is thought to cause the good reactions of THC and without the psychoactive high, there is little more than anecdotal evidence for those claims.

There are believed to be many medicinal and therapeutic uses for THC. Notably, the FDA has approved two THC containing drugs in pill form – Marinol and Syndros – for treating nausea in patients receiving chemotherapy and stimulating appetite for AIDs patients. Since marijuana has been a Schedule 1 substance for so long, there has been little official clinical research on its medicinal and therapeutic value.

However, it is known the endocannabinoid system is part of many areas of the brain that regulate a variety of body functions including emotions, behavior, pain, memory, motivation, and memory. More clinical research is being done on marijuana and Green Flower has an extensive summary of some of these along with links to published research.

Aside from the high, people are using marijuana for a variety of ailments from chronic pain to mental health issues to insomnia to arthritis to Alzheimer’s.

Marijuana and hemp seem to have different legal statuses around the world and across the United States. Furthermore, the status is rapidly changing all the time. Just last year (2018), Michigan and Vermont joined eight states and The District of Columbia in legalizing recreational marijuana. Meanwhile, only four states still classified marijuana as illegal although several limit medical cannabis to CBD. Wikipedia maintains a marijuana legal status list for countries and Leafly has a list of state statuses.

Keep in mind, regardless of your state’s legalization status, the U.S. government still considers marijuana a Schedule 1 substance.

Even in states where marijuana is legal, there are age restrictions, limits to how much marijuana any person can possess, and limits to how many plants they can grow. Selling marijuana is also relegated to licensed or permitted businesses and each state has different rules. However, if you find yourself with a large crop of cannabis on your homestead, you can freely share it with friends of legal age.

As mentioned, cannabis is easy to cultivate and fast to grow. In the past several decades, a lot of cannabis cultivation was often relegated indoors especially for people growing it for personal use. Before growing cannabis became legal in some states, growers and indoor plant growing business often used tomato plants as a proxy for discussing growing conditions.

That is an excellent starting point. Like tomatoes, cannabis plants prefer warm, but not too hot climate – between 65°F and 85°F. They like lots of midday sun. Cannabis can take 8-20 weeks from germination to flowering stage. The time depends on the variety to refer to seed information for more precise estimates.

They like moist, well-drained soil rich in organic matter and many nutrients. Consider fertilizing throughout the growing season. There are several cannabis specific fertilizers that are designed for maximum production.

There are a few caveats. Purchase sexed, feminized seeds so the male plants don’t have to be weeded out. During the flowering stage, resinous buds develop and only the girls give buds. Unless the plant is an auto-flowering variety, it is sensitive to daylight hours and will only switch from vegetative to flowering when daylight hours fall to 12 or fewer – the fall, that is. Although the TCH concentration is lower for auto-flowering varieties, many beginning growers opt to start with these since they will produce buds regardless of day length.

It is that easy, however, there are several tips and tricks for maximizing the production of a cannabis crop. In addition, some growers prefer to completely control their plants’ environment and they opt to grow indoors using hydroponics and timed grow lights. All of that is outside the scope of this article, but there are extensive resources including this helpful guide from PotGuide.com.

Getting seeds can be a complicated matter since the same rules for selling buds applies to selling seeds.  There are online resources for procuring seeds, but due to marijuana’s federal classification, shipping seeds is still a tricky task, so buyer-be-aware. In some states where growing recreational marijuana at home is approved, equipment suppliers may provide seeds with a minimum purchase.

Cannabis can be consumed in a variety of ways whether it is inhalation, oral consumption, or topical application. The actual chemical concentrated in the flowering bud is THCA which has a carboxyl group attached to it. The key to getting THC psychoactive effects associated with THC as well as some medicinal or therapeutic effects, the THCA needs to be converted to THC through a process called decarboxylation. 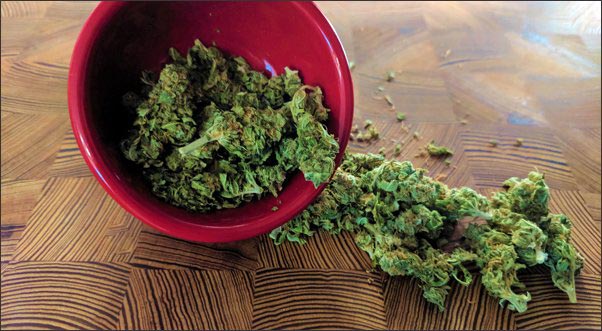 Drying buds does result in some decarboxylation, but what is really needed is higher temperatures. Smoking buds or using a concentrated oil, like those found in vaping cartridges, is hot enough to initiate the reaction. Exposing THCA to 220°F for 30-45 minutes is also sufficient for decarboxylation. Still, others prefer the more sedative and less psychoactive effects of cannabinol (CBN) which can result from the degradation and oxidization that occurs above 300°F. Once the buds are decarboxylized they can be used for edibles, infusions, and topicals.

To increase the surface area and ensure even heating, grind up the buds in a mortar and pestle or spice/herb grinder. Then, one of the easiest ways to decarboxylize the chopped buds is in an oven set to 220°F to 240°F. Bake them for 30-45 minutes. The decarboxylized buds can be used directly. However, some people don’t like the strong herbal flavors and prefer to use the buds for infusing into liquids, honey, or alcohol.

Alternatively, the chopped buds can be stirred into a carrier oil and cooked in a slow cooker. Once the oil reaches 220°F, hold them at that temperature for 30-45 minutes then strain the oil through a fine mesh sieve. The oil can be used in the place of oils for cooking or added to topical recipes like lotions. Butter and coconut oils work great for edibles.

Both the oven and the slow-cooker method have the drawback of producing aromas that are a signature of cannabis. For people wanting to keep the aromas to the minimum, an electric pressure cooker is a great alternative. This video shows a useful two-step method for using a pressure cooker to make cannabutter. Finished cannabutter freezes well.

Keep in mind, while recipes for infused oils provide recommendations for the weight of cannabis to use, the strength of the psychoactive effects will depend on your cannabis. Adjust accordingly and consider the less-is-more approach before gobbling up a tin of brownies.

To get started with edibles, you can certainly use cannabutter in a favorite brownie recipe or box brownie. But to upgrade from the standard “Weed Brownies” try out this Honey Ginger Cannabread for a spicy sweet treat. 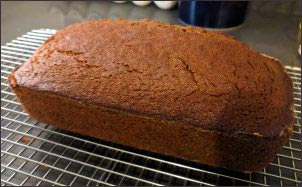