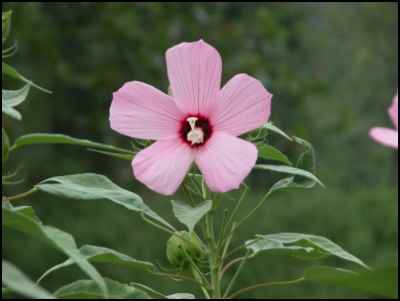 I have a perversion.

When I go for a walk around my place, it may appear that I’m enjoying my time in nature, but the truth is, I admit it, that I’m always thinking about how to “improve” on nature.

Normal folks plant flowerbeds, but perverts such as myself try to make creations that give the illusion of natural groupings. We like to improve on perfection.

That’s how I got started building a group of Rose Mallow, Hibiscus moscheutos, about eight years ago. I had a marshy area that I imagined would look great covered with pink Rose Mallow.

A few miles from here is a collection of a white version that went wild decades ago that now covers an area around an old pond with a couple of acres of blooms in the late summer.

Maybe you’ve seen Rose Mallow growing near you, it’s a native in most of the south and in California, but it’s commonly cultivated all over the east and Midwest. 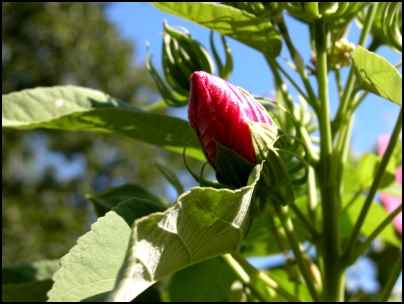 It’s a tough, stalky plant that grows up from a very sturdy root crown. It grows taller than your head and in late summer it provides a multitude of huge tropical-looking blossoms. The blooming always starts about the third of August down here in my little frost-pocket in southern Missouri and it will continue to bloom almost, but not quite, to September.

As I say, I’ve been building a group of Rose Mallow for several years now. They seem to thrive in the marshy, wet ground that we have so much of. I top-dress them with compost about once a year. In the most recent years, I’ve started having enough plants to start dividing root clumps and multiplying the group.

Some of the advice I’ve read suggests that the plants are very sensitive to having their roots disturbed, and these folk recommend propagation by seed or tip cuttings, but all I can say is that I haven’t had any of these problems, and in fact have been pleasantly surprised by how well my specimens have taken to being moved.

Rose Mallow comes out of the ground in shoots after just about everything else is already up. It produces a light-green rather hairy leaf that makes you think more of a weed, but then, always right on schedule, you have those stunning big flowers, six inches or larger, that cover the plant. All through August, the show goes on with fresh blossoms replacing the old ones every day.

There are plenty of different cultivars of Hibiscus moscheutos and you can find color variations from white to deep red usually with a deep red center, hence one of the common names, “Crimson-eyed Rose Mallow”.

For my purposes though, I had a definite mission. 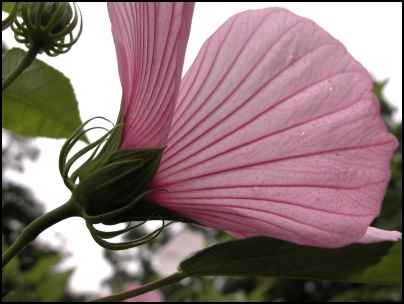 Since I am unabashedly lazy, and want a plant that will live on its own, I wanted to get wild specimens or very nearly so. However, due to the perversity mentioned earlier, I am not content to settle for the plain-Jane white hibiscus that you commonly find growing wild, and I was also not so thrilled by such cultivars as the hybrid “Disco Belle”, a crimson floozy if I’ve ever seen one.

No, I wanted the rarer blossom, the soft pink that occurs infrequently on the periphery of an otherwise white clump of mallow, a native Southern Belle of extraordinary beauty.

Since I’ve always had reason to drive around my state quite a bit, I was aware of two such instances of pink blossoms developing in a white group. Both were about seventy miles from my home… but in different directions.

Should you find yourself in a similar situation, I recommend that you contact the County Collector’s Office and get the address of the landowner so you can write him a nice letter asking permission to dig up one of the twelve million hibiscus plants growing around his abandoned pond.

That, however, isn’t what I did.  What I did was just go there in my pickup with a spading fork, remove one of the pinker specimens and leave as quickly as possible.

That’s been about eight years ago. Since then, one of the specimens has proven to be much more robust, and pinker, than the other, and I suspect this huskier version comes from a cultivated line. It spun off a third clump which had very pale white flowers the first year, but was a deep and satisfying pink thereafter.

Two years ago I made the first root division, which was successful and this past year I’ve done several more, so I’m hoping to see a much larger area in bloom this year than last.

I’ll update this article when I have the photos. 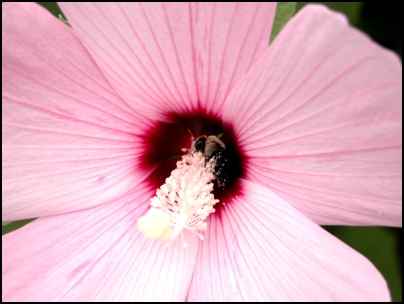 Johnny Appleseed: The Myth and the Man