Homesteading Requires a Keen Edge: Knives on the Homestead 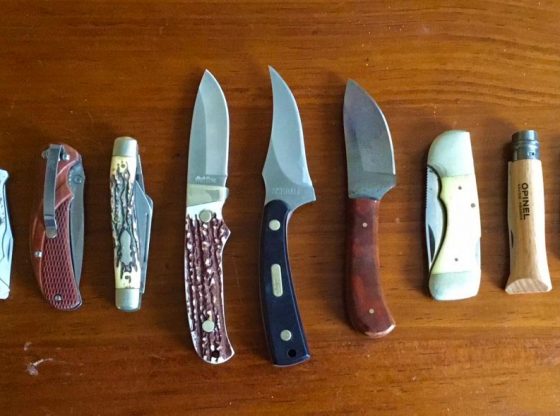 What’s the most oft-used tool on the homestead? Whether cutting vegetables for supper, field dressing wild game, butchering livestock, or freeing a stubborn piece of twine on a bale of straw or knotted string on a bag of feed, the answer to all is the same: a knife.

It’s not often that the same knife is used for all those chores.  Chances are, you reach for a paring knife out of a kitchen drawer while prepping supper, use a sheath knife or pocketknife depending on the size of the game, turn to a butcher knife for processing livestock, and pull out that pocketknife to free that straw or feed.

Whether you rely on all those knives or multi-task with a pocket or sheath knife, the initial statement rings true.  You’ve probably already discovered, or will in your journey of rural living, that a knife is your number one friend… or at least in the top three behind a spouse and maybe a dog.

Let’s consider the lineup of knives on the homestead.

Knives to Keep Close at Hand

If you’ve been living rurally your entire life, or at least for a few years or more, you probably already have a good handle on the types of knives you need to surround yourself with each day. If you’re new to rural life maybe this can be a primer on where to start on what will undoubtedly become a long and varied list.

The advantages of carrying a folding pocket knife are safety, compactness and multiple blade choices. Most pocket knives range from one to three blade options.The handiest tool to have is the one which you can get to right now. To that end, every homesteader or rural resident should keep a pocketknife or small sheath knife within reach at all times.

The most sensible choice is a folding pocketknife. Size and brand are personal preferences, but as with all tools buy the best quality you can afford at the time.  Better quality tools, including knives on the homestead, will not only last longer but will be safer and more enjoyable to use over the years.

Why a folding knife versus a fixed blade?  A folding knife offers safety, compact carry, ease of access, and often more than one blade choice. I have an ever-growing collection of pocket knives.  For church, or other times when I’m wearing dress pants, I carry a small penknife or two-blade folder.  When I’m wearing jeans or hunting pants, I’ll usually carry a slightly larger two- or three-blade folder.

When selecting a folding knife, keep these things in mind:

Two decent alternatives to the pocketknife are a small belt or lanyard sheath- knife.  Everyone has what feels right for them, and carrying a belt sheath-knife has always felt awkward to me.  I’m constantly catching it on the seatbelt in my truck, or on something I brush against while walking.  But a small fixed-blade knife in a belt sheath might be the way for you.  We’re not talking about Special Forces here, or hacking through the jungle with a machete, but just a handy, small knife; a three- to four-inch blade is often the best for everyday tasks.

While I’m not a modern-day survivalist, I did pick up an idea from that movement a few years ago and purchased a small, neck-lanyard sheath-knife which has proven to be very handy.  I bought mine online and was sorely disappointed when it arrived and I found it was only about half as big as I had imagined. But my concern quickly faded when I saw what kind of edge the little fixed blade held, and how utterly compact and out of the way it could be while still being easier to access than my pocketknife.  Now I rarely go in the woods or afield without it hanging around my neck.

I keep it razor-sharp and the molded-plastic sheath holds it secure in the handle-down position.  If I need to slice the string on a bale of hay or slit open a feed sack or the plastic packaging on something I bought, I simply grab it with one hand, draw it downward and out of his sheath, do whatever slicing or dicing is required, quickly snap it back into the case on the lanyard around my neck, and I’m back in business.  And the whole setup easily tucks inside a jacket or shirt to avoid snagging on tree branches or getting caught in moving equipment.

Whether in the pocket, on the belt, or a lanyard around the neck, you’ll quickly discover that a knife that’s handy can be a life- and time-saver.

The Right Knives Around the House

Remember my earlier statement about buying the best quality you can afford at the time?  In my kitchen at home, and at my hunting cabin, I have a small assortment of paring knives bought by my grandparents in the early 1900s when they were starting out life together.  In fact, some of those knives may have been handed down from their parents.  And at least a couple of them have already been handed down to my grown children, meaning four generations have benefitted from a quality kitchen knife.

Some of those knives have been sharpened so much that the blades are down to about a quarter-inch wide.  Grandma prepared three meals a day for a hardworking husband and children on the farm, and oftentimes visitors or other farmers or temporary hired help.  She also used those knives for butchering chickens, hogs and cattle, and as steak knives at the table. And she always wanted them sharp, so she kept a small sharpening stone in a kitchen drawer and wasn’t afraid to use it.  I never knew of her to use a steel or strop to help maintain an edge instead of just the stone, which explains the severely ground down blades.

Grandma’s “go-to” blade was a four-inch paring knife. Of course, by now a couple are down to about two to three inches long.  But they’re still solid, straight, razor-sharp cutters.  All have hickory handles—worn smooth and curved by decades of use and cleaning.

Here’s a tip for scoring some old quality kitchen knives if grandma didn’t leave any behind for you.  Hit the local flea markets, thrift stores, and yard sales, and, even better, estate sales.  I’ve purchased many fine kitchen knives from flea markets and popup sales.

The Right Knives on the Homestead for Butchering

While it’s a move away from the nostalgia of the hickory-handled carbon-steel-bladed knives which make up most of our kitchen arsenal, for butchering I prefer a 6-inch butcher knife or a 4- or 6-inch fillet knife.  I use a professional-grade butcher knife which I bought as a custom set of a knife, steel, and leather case made by a craftsman I met while on a trip in western Montana a few years ago.  Prior to buying this set, I used a relatively inexpensive 4-inch fillet knife.

Early on I thought I needed to use a hunting knife to butcher my wild game and livestock.  That was usually a four- or five-inch drop point.

Then, a few years back, my grown son happened across some fellow hunters who processed a lot of deer each year and they swore by using very flexible fillet knives for working with more precision around bones and joints.  I gave it a try, and ever since, I have used my hunting knife for field dressing and skinning, and a fillet (or similarly-shaped butcher knife) for breaking down the animal into freezer-bound cuts.  The control is exponentially better, meaning less meat left on the bone and a safer and more enjoyable butchering experience.

The Right Knives in the Barn, Workshop, and Elsewhere

Every day, there’s going to be something you will need a knife for while out and about on your property.  Besides having the pocket or sheath knife at hand, I always keep a few more cutting tools in key places.

In my truck, I keep a 4-inch fixed-blade knife in the console.  This one has a neon orange handle, which is great for grabbing and using on the go.  I’m far less likely to leave it laying on a fencepost or the tire of a tractor when it’s a bold color.  It’s also handy to grab to cut baling twine or weed-trimmer string.

The small toolbox I carry in the truck has an old hunting knife stowed inside simply as a backup to the razor-blade utility knife also kept there.  I keep similar utility knives and old fixed-blade backups in all my toolboxes.  I have different boxes for different tasks such as carpentry, plumbing, electrical, and mechanical.

In the barn, I keep another old fixed-blade hunting knife near the door, along with a large pair of scissor-style shears.  I’ve found both to be handy over the years for tending to livestock and the equipment they rely on such as waterers, feeders, and such, and for opening packaging of things I use there, such as traps and bait to keep mice and flies at bay.

A Dull Knife is a Homestead Hazard

I’m quickly becoming the old codger I always hoped I would someday be.  More than once throughout my years, I’ve watched in awe as some old guy—usually wearing bib overalls—worked magic on a pocket or fixed-blade knife using only a small Arkansas stone he carried in his pocket.

I’m proud to say I’m becoming that old man.  I carry a small sharpening stone in my truck’s cup holder, in each of my toolboxes, in my fishing vest, my hunting vest, and oftentimes one in my pocket.  Five decades of living rurally have taught me the importance of a sharp knife at the ready.

And I’m pretty confident in my technique after decades of studying old guys and a fair amount of online research and trial-and-error practice.

For more details about how to sharpen your blades to a razor edge, check out my companion story on knife sharpening on Homestead.org.

If you have no desire to learn the art of sharpening, there are plenty of handy gizmos and gadgets out there that utilize hardened steel, ceramic, or diamond-impregnated rods built into plastic holders for quick sharpening and honing.  Either way you choose, the key is to get your knives sharp and keep them that way.  If you do so, you’ll find them to be some of your best friends on the homestead.

So, let’s review.  The basic cutlery for a well-equipped homestead includes a folding pocketknife or fixed-blade sheath belt- or lanyard-knife to keep within reach at all times; a couple three or four-inch paring knives for the kitchen; a butcher knife or two including a fillet knife for deboning when processing wild game or livestock; and a few assorted fixed-blade or folding knives tucked in toolboxes and handy in each outbuilding.  Add to that a good sharpening stone or two, and maybe a honing steel and leather strop.

Now you’re ready for whatever comes your way on the homestead… at least as far as cutting tools are concerned.

How to Save Money on Taxes by Homesteading
Fantastic Figs from Your Farm: It’s Easier than You Might Think.