Salvage is the Soul of Our Homestead 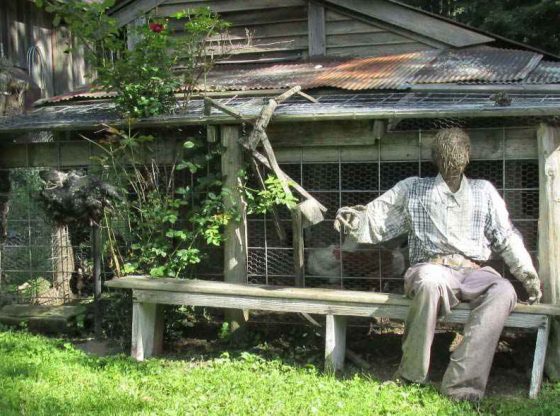 A girl about the age of twelve, sporting a French beret, stands to the side with her face tilted, looking over the fields as I turn my car onto the driveway. She doesn’t move but stands eerily still with only her dress stirring in the breeze.

She is one of Michael’s many creations. “Scarecrows” he calls them, but to me, they are depictions of people, complete with sinuous limbs, brought to life through the bending and twisting of straw onto hard, wooden frames. The girl and other “scarecrows” are carefully arranged on the lawn and oversee gardens of vibrant colors and assorted textures. The scarecrows and gardens serve as mere segues into the creative world of Michael and Linda Melle. 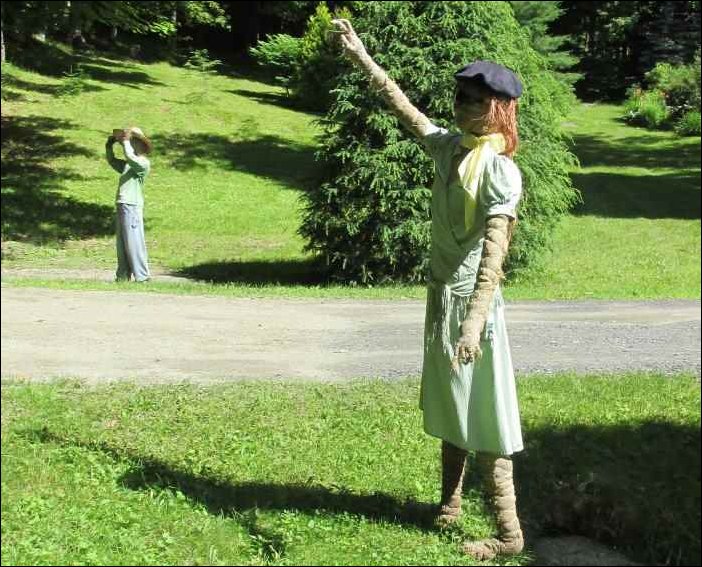 The Melles took “the long road home” when building their sturdy, two-story colonial house. Resting on a hill surrounded by nine acres of gardens, fields, and woods is a simple home with painted brown clapboards and a metal roof. A chicken coop, the residence of vibrant hens providing eggs of different colors, is viewed from the front door. A gray, wooden barn decorated with Michael’s tin art sits alongside the coop. The recent addition of a garden shed with leaded-glass windows is nestled closer to the house. At first glance, the modest appearance of these buildings belies their intricacies and the amazing stories of their birth.

The Melles are homesteaders in the truest sense of the word. Like many other trailblazers, they channeled their vision of a place to call home into the labor of innovation. The roofs, rafter boards, and flooring from various Berkshire buildings are integrated into their sanctuary making it a unique paradise. Their discomfort with debt further fueled, and fuels, their creativity.

Sitting with Linda and Michael in their spacious three-season room, with soft sunlight pouring through windows of sans glass, I am regaled with stories. I am told the windows are from a friend, having been part of a business deal gone sour. As I listen, my eyes settle upon the warm hues of the braided woolen rugs deepened by the light. The rugs, skillfully designed and crafted by Linda, cover the honey-colored hardwood floors. One would never guess these same floorboards were once trampled by teams of basketball players from area schools.  Michael salvaged them from the Pittsfield YMCA’s old basketball court.

Many people decide upon a location to live based on access to work and the quality of school systems, but the love of Forbes Library in Northampton, Massachusetts was the deciding factor for the Melles. The building’s architecture and the books contained within made it a warm and welcoming place for those with eager minds; they needed to be within 15 to 20 miles to be given a card.  Unable to find the right house in the right area, they decided upon the purchase of nine acres of land in Plainfield, marking the start of their adventures.

While living and working in Pittsfield, Linda and Michael took full advantage of weekends to prepare the land for the building of their home. With two children in tow, Linda pitched a tent, prepared meals and tended to the kids while Michael cut trees, removing rocks and stumps to smooth the landscape. The first structure raised was the barn, with the materials procured from an 1898 warehouse titled “Building #2.” 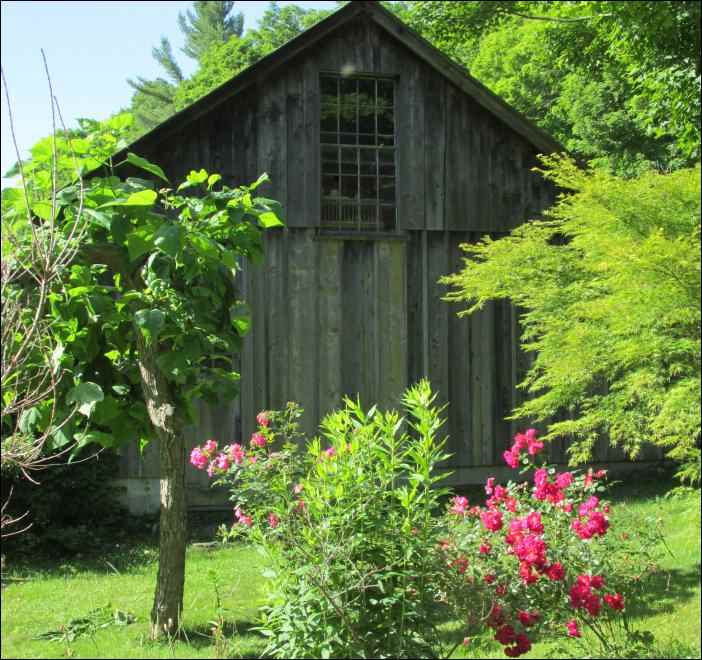 There’s an art to salvaging materials for use in construction. The laws today, as building inspectors will tell you, are not as permissive as they were in the 1980’s. The Melles describe having a solid working relationship with a building inspector as imperative to a project. This advice is as true today as it was forty years ago.

To take apart and remove pieces of Building #2, Michael needed to have a dump permit, insurance, and to set himself up as a commercial business. He christened the business, “Mass Destruction.” The warehouse originally was built from a kit, and its dimensions were 70×30 feet with some fine pieces of siding, timbers, and roof rafters. The salvageable parts resulted in a “new” 30×30-foot barn.

The building’s tapered cut-nails made the demolition much easier. Michael crafted a “gigantic wooden hammer” to use for the project. He hit the building with the hammer — “It would go thud, and the boards would poof. Like one hit and every board would fall off the building.” He went on, “…the timbers were all in perfect shape.”

A tradition began of preparing food to entice friends and family to help with the muscle work. Frames went up and Building #2 was converted into a spacious dry barn. Linda, Michael, and the children traded in their tent for the comfort of four solid walls with a floor during the weekend pilgrimages to the site of their new home.

The harvesting of building materials was done as opportunities presented themselves and not necessarily when the Melles were ready for their use. Before building the barn, Michael salvaged a metal roof for their unbuilt house from a Pittsfield airplane hangar whose base was dangerously decomposing.  Judging by the gauge of the metal, he thinks the roof is pre-1930’s. “You can hit it with a hammer and it won’t make a dent.”

Transporting materials from their original site to the new homestead wasn’t always easy, and the “original” site was not always the first place where the materials had been used. Michael described loading the roofing and beams of the hangar into his homemade wheel-cart after the airport commissioner gave his blessing.  A large gully made it impossible to move his truck closer to the site. After some thought, he added as an aside, “This wasn’t the first use of any of that material.” The airplane hangar’s previous incarnation was that of a factory building.

The hangar roof was eventually secured to the frame of their house. Unsightly areas of rust scattered over its surface before it was painted made it unappealing to the inspector from the bank. Michael remembered him saying, “You can’t have that roof… We’re not paying… You know, this is a nontraditional use of materials.”

Michael was irritated. He knew the inspector had a metal roof of his own that was “exactly the same.” The Melles’ bank loan was small; the model of “pay as you go” was instilled in him from generations of house builders before him.  A supportive board member of the bank interceded, and the roof, as well as the Melles’ loan, remained intact. 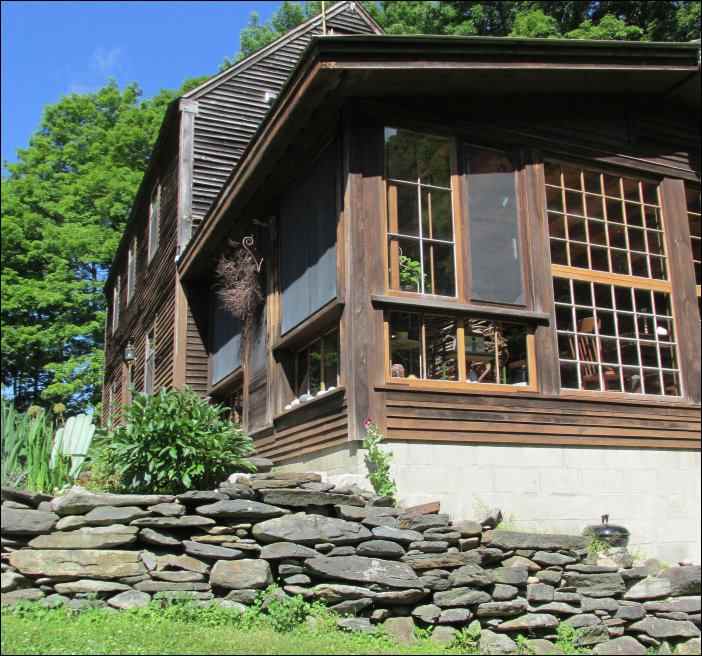 Salvaging material from decaying structures is risky and so it was with the coop roof taken from a Hinsdale barn. Linda encouraged Michael to tell the story…

The collapsing barn had a metal gambrel roof. As with other demolition/salvage projects Michael received permission from the owner and took out the prerequisite insurance before beginning his work. The morning he arrived the roof was damp with dew.

Standing on a sheet of metal at the peak of the roof, he pulled the nails holding it in place, releasing the last nail.  “The thing just starts sliding like a toboggan. I’m backwards.” He spun around and when at the edge, he leaped several feet to avoid landing on the piled 2x4s whose sharp edges poked through like daggers. He hit the lawn and rolled and rolled. He went on, “I don’t know how many rolls…roll, roll, roll… get up. And I don’t believe it, I’m up.”

Linda appeared frightened as if she was back at the site again, “He almost died.” Fortunately, their harrowing adventures were few and far between.

The Melles were still living and breathing the creation of their home eight years after purchasing the land. Michael was a postal worker; he left his workday behind following each shift. The remaining time was spent clearing land, digging the foundation, and gathering resources, with only two of those years spent in active construction. Erik, their youngest child celebrated his seventh birthday shortly after moving into their “new” home. 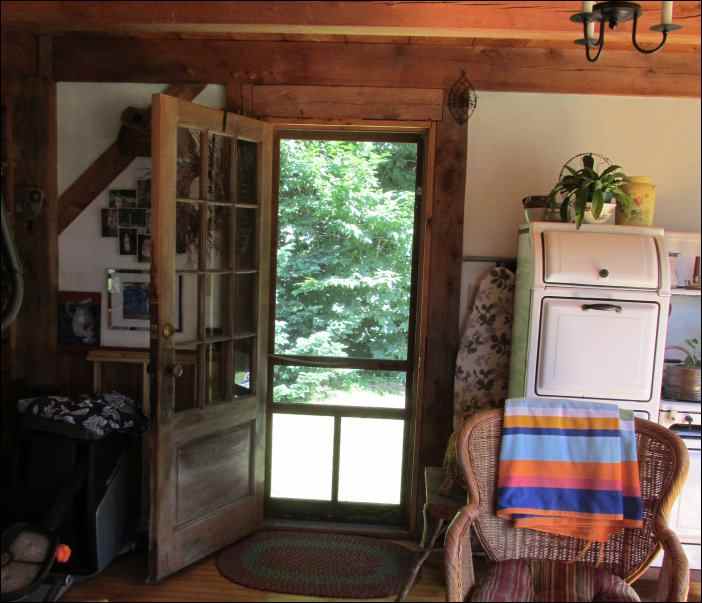 Linda recalled the intensity of raising two small children during the building phase. They had moved from their home in Pittsfield and into her cousin’s house for the next four months. The weekend trips to the land continued with the barn as their base.

She remembers herself saying, “Michael, this is getting old.”

Michael’s father quietly suggested they purchase a trailer to live directly on their land. Heeding his advice, they bought one from another family who had used it for the same purpose. The town hesitated in allowing the makeshift home, but okayed it if it sat on a permanent foundation. Which it did; the foundation consisted of piers.

They moved into the trailer and waited almost a month for electricity. Linda got water from their neighbor, lugging it in five-gallon containers. She developed a keen appreciation for the clear, clean liquid so many of us take for granted. “Not having water to turn on all the time… and having to ration it out.  Running water and clean water that you aren’t afraid to drink—you hear how people worldwide don’t have that. That’s number one, really.”

The luxury of electricity arrived, and with it a working pump and toilet.  No more carrying forty pounds of water to their trailer.

On a Saturday morning in September of 1988, three years after moving into the trailer, Linda had enough of roughing it. Her son and daughter were sharing a small room in the cramped space, and although they both were young, Linda sensed her daughter, Eliza, needed privacy. Sometimes Eliza would quietly take her sleeping bag and steal away to spend the night on the sawdust-covered plywood floor of her soon to be room. It was time to move.

With Michael at work, Linda made her decision for their little family to take up residence in their rough, but new, home. The move surprised him as it presented different challenges for finishing the house.  He had to work around his family and their belongings.

Linda nostalgically recalls, “It was very raw, but we were warm and had a wood stove for heat, back up heat and water, and a toilet… what more could you want?”

Today, across the road from Linda and Michael, is a house showing off its new metal roof. The land was purchased by the Melles as a way of securing their retirement and was later sold to their daughter. Eliza and her husband negotiated updated building codes and used newer materials for their home; nonetheless, Michael and Linda contributed their expertise and experience to the young couple.

Eliza’s house is newer in every regard, but carries forward the Melle tradition of home building; it is a tradition as old as the mountains of northern Italy. Michael’s great-grandfather came from a long line of masons and constructed his own home of handcrafted, hollow, painted concrete bricks—bricks he fashioned at the end of every day until he had enough to build his house. One can only imagine the homes Linda and Michael’s grandchildren may one day create. 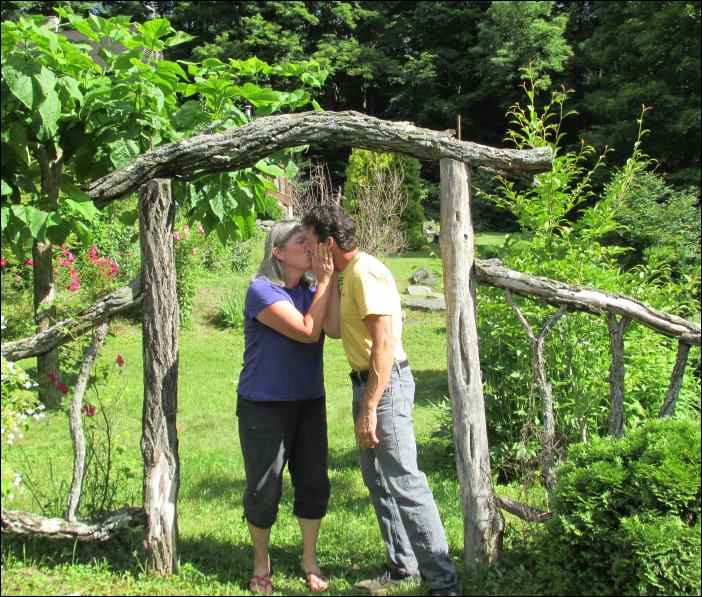 Skinny Cream of Asparagus Soup
Waste Not, Want Not: Repurposing on the Homestead