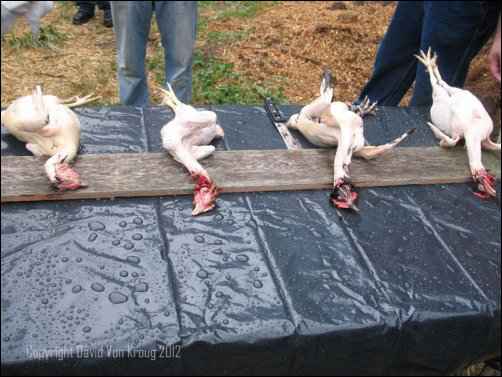 A Portlander guy walks into a butcher shop, tells the man behind the counter he has to kill his beloved chicken, it’s old and sick, but he can’t stand to cause his pet any pain.

He wants to know the best and most bloodless way to dispatch the bird.

“You put it in a plastic bag and leave it in the freezer overnight.  The bird will eventually fall asleep and freeze to death, silently and peacefully.

The chicken owner goes home and proceeds to follow the butcher’s instructions.

He says goodbye to his bird, finally gets it into the bag, and slams the freezer door shut, vowing not to look inside until the next morning.

But once the dawn begins the pet owner hears a startling noise.  He can’t quite identify it.  He goes down to check and hears it coming from his kitchen.

Fearing the worst, he opens the freezer door to a “COCK-A-DOODLE DOO!” from his beloved and very much alive bird, as it sticks its icicle-encrusted beak and head out of the plastic bag.

Thankfully, many urban chicken keepers don’t have to relive that scenario and are now learning how to turn their stocks into food themselves.

“You are taking a life.  Do not forget that.” 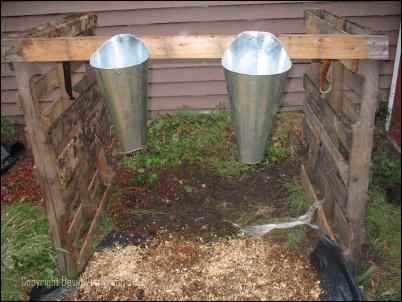 The gray Portland skies start to open up and temps dipped into the 60s even in mid-July as bird master, Chance, inserted the bird upside down into the custom metal cone, held its beak, and drew a clean two cuts across the neck.

The blood did not spray wildly, there was no fountain of gore, just a quick downward gush and steady drip for about a minute and a half.

“And be sure you thank your animal for the life they are giving you,” Chance added.

We are at an urban-farm store on the east side of the Willamette River, just blocks from downtown Portland, Oregon, for the first class on how to kill and clean your city chicken.

Outside, Chance handles the bird carcass by its tied legs, hanging it on one of many hooks on the rebar frame, jammed into the ground over a pile of coop-grade wood chips.

This bird he and his wife, Rois, have brought along is Amelia, one of Rois’  favorite laying hens.  It was only the first of many animals suspended upside down so they could bleed out evenly, allowing for a much easier cleaning of the bird.

The killing cone-bleed-out method’s main purpose is to prevent the animal’s death from being a shock to the system, it is less a violent jolt than it is a quick and almost painless death.

This prevents neurotoxins from being released from the spinal cord into the bloodstream, a fact that many attribute to tougher and more bitter meat on an animal.

In the cone method, the birds calm down and go into an almost trance-like state.  (Razor Family Farms has a good step-by-step site on how to build your own.)

You’ll want them to be solid enough to hold bigger birds, so some sheet metal, aluminum or tailored traffic cones are a good bet. 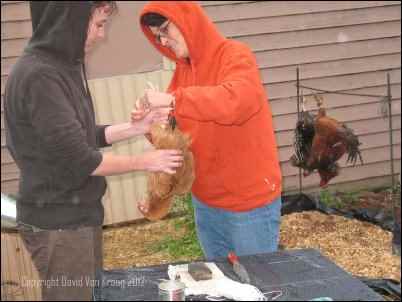 Chance grips the bird’s beak and gives it a slight pull, then he slides his handmade knife against each of the bloodlines and the dark red drips onto a sawdust pile as the watching crowd goes silent.

“Thank you, Amelia,” a voice speaks from the back.

Next up is our first student, Amber.  She un-boxes her hen, they tie the feet together and drop her into the killing cone.

“She won’t hold still enough.”  Amber is struggling to expose the neck for the cut.  After some help from Chance, she runs the blade across the bird’s neck.

It’s sharp enough to slit the skin, but not deep enough for the kill.

“Don’t saw back and forth,” one student suggests.

“It’s just like in the movies,” Chance adds, making the throat-slitting motion with his finger below the chin.

Amber gets the first vein, then the next, and the bird bleeds out, an involuntary post-mortem flap of the wings and “bu-CAWK” as she is carried to the hook frame.

There’s no running around, like the old saying goes.

Pretty soon the students are getting the feel for the kill, bleeding out the birds and beginning the de-feathering process of dunking the chickens in a big vat of boiled water, pulling the tail feathers first, then pulling heaping handfuls into the garbage can until it looks like, well, a bloody rubber chicken.

They are rinsed and dropped into a cooler of ice.

Portland city laws allow for up to three chickens within city limits—no roosters, in this city known for its proximity and love of nature and outdoor recreation.

The urban chickening has been revived in the eco-obsessed 21st century, alongside the Rose City’s vegetarian and vegan restaurant and retail scene.  Nearby cities Forest Grove and Salem, Oregon’s capitol city, are also considering relaxing rules on chickens in the city.

Now there’s even a goat tour, as the barnyard extends to some city rooftops.  The goats are used for milk and cheese, weeding, and companionship.

Yahoo! Green was one of many environmental organizations praising Portland, ranking the Rose City number one. “Portland is also at the forefront of local food movements.  The city has 13 farmers’ market locations and an amazing diversity of fruit, berries, vegetables, and nursery plants grown locally.”

Popular Science added to the chorus: “Half its power comes from renewable sources, a quarter of the workforce commutes by bike, carpool or public transportation, and it has 35 buildings certified by the U.S. Green Building Council.” 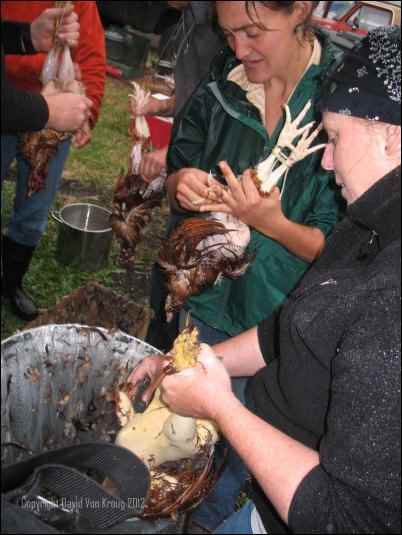 If the eggs came first, people were soon trying to figure out what to do with the chickens, but pulling off a class on how to slaughter the birds in an animal/vegetarian-friendly town like Portland would definitely require some sensibility.

Controversy erupted in 2010 when Reed College senior Gabriel Holt started publicizing a planned class he called “Chokin’ the Chicken” at his home—with a subsequent barbecue to follow.

He hoped to teach the humane slaughter method and have a closer connection to their food as a part of their annual week of alternative education for non-credit courses.

The plan was quickly picked up and disseminated by Portland’s more radical faction Indymedia affiliate, including the group In Defense of Animals.

Holt said he got several threatening e-mails and messages.  The following weekend, Holt’s birds and his housemate’s hens were stolen out of his yard, the birds never to be found.

“It’s not just for eggs—some people, not a lot, but some folks, are getting their hands a little bloody and raising meat chickens.  They figure that they eat chicken so they may as well be able to kill it themselves,” store owner Robert Litt tells me.

As the day progressed, it became clear that these urban farmers were quite comfortable—and even getting better at—the kill.  By the time the birds had been de-feathered, it was just another day on the farm.

The naked, headless carcasses were lined up on Chance’s wooden table, ready to be gutted.  He used a butcher knife and a handmade boning knife. 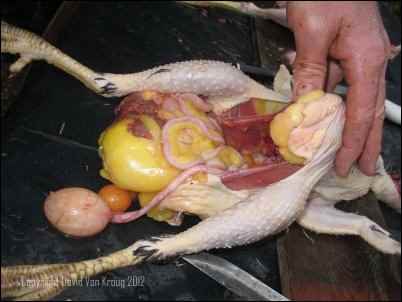 Inside many of the birds are un-hatched eggs—something most here have never seen before and about a close a reminder of the circle of life as one is likely to find.

Chance advises everyone to remove a small gland on the bird’s tail, lest it spill open and spoil the meat.  “It would be like opening up a sweat gland all over your food,” he says.

Chance said he learned by watching Rois’ father slaughter the birds on their Oregon farm.  Their family has been perfecting the urban farm life, in blacksmithing, gardening, canning, recipes, cooking and general homesteading for a few years west of Portland.  Their blog contains running details on all of these things, as well as many links to fellow forgers, farmers and free-living country folk.

Next, the students remove the entrails, keeping the livers, hearts, and gizzards.  Inside the gizzards is the grit the birds have eaten, rocks, and shell fragments.  The lungs, stomach, and intestines go into the gut bucket.  Many keep the feet and necks for soup stock. 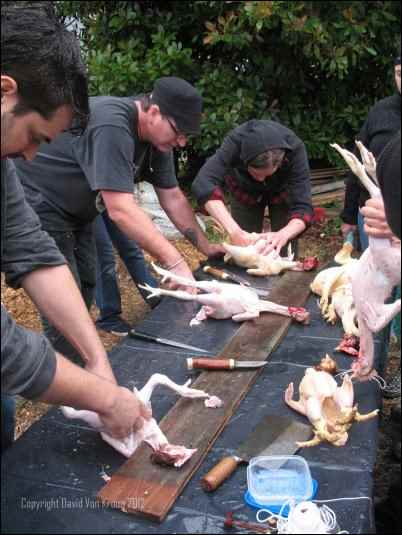 “It’s all about doing things yourself because you can learn to do it right.”

For the urban-farm store, it’s more than technique and skill.  There’s an element of concern for animal well-being that should appeal to even the vegetarian-vegan crowd.

“Because there is really no need for humans to eat chickens or other animals, we see it to be completely unnecessary to kill the animals,” People for the Ethical Treatment of Animals spokesperson Ashley Byrne said.  “I don’t think anyone would kill their dog or cat by bleeding it out.”

That said, Byrne agreed the chickens were getting a better deal than they would at many mass-factory farms.

“It’s not as gruesome as a slaughterhouse, their lives are vastly better than the life of a chicken on a factory farm where they live their lives in darkness,” Bryne added.

According to a group calling itself United Poultry Concerns, the mass kills of the chicken industry shock and traumatize the birds.

Once they have been bound and shocked by an electrical charge, they are hung upside down—similar to the cone method, yet many do not die from the initial throat cut and drown in their own blood.  This, the group says, leads the birds to struggle until death.

I say this not as a specific criticism of the industry—only to draw a comparison.

Oregon poultry producer KooKoolan Farms in Yamhill County say the birds are much more subject to stress and disease in confinement-based farms, leading to a life of stress, before a traumatic death.

The United Poultry Concerns in fact calls for more regulations on the killing of poultry to be made into federal laws—which arguably could make business harder for the small farmer or breeder—but that is a separate topic for another time.

Kookoolan says there has been a 98 percent drop in the number of non-industrial chicken producers in the past 50 years as consumption has increased.  However, the fact that urban chicken killing classes are now starting to sell out could be indicative of a reversal.

Now, many more in Portland are breeding for eggs and even meat.  The Oregon State University extension service is hosting classes on farms around the city on raising meat birds and hosting free-range flocks.  Portland city regulations allow for three birds in a yard—no roosters.  More are allowed for the price of a permit.  The city hosts an annual “Tour de Coops” in the summer for a peek into the city barnyards.

“We’re doing this [class] to be more humane than the alternative,” says Litt.  “What we say to vegetarians is that, through the class, we wanted people to come face to face with the act of killing which should make them more sensitive to animals’ emotions and value.  From there they can make an informed decision for themselves based on the experience.”

For those urban poultry keepers who choose to restock their broods and want to avoid the Reaper altogether, Urban Farm Store farmer and bird expert Pete Porath has turned his farm to a retirement home for old hens.

As recently featured in the New York Times, Porath takes in poultry and fowl that are no longer laying birds to give them a more pastoral existence.  Porath raises chicks, ducks, and turkeys at his property near Estacada and cares for those old hens city dwellers have brought to him.  The “retirees” eat pests, and are used for breeding, compost, yard maintenance, where they are treated as pets the Times reported.

All in the continuing cycle of life on the farm—whether in the city or the country.