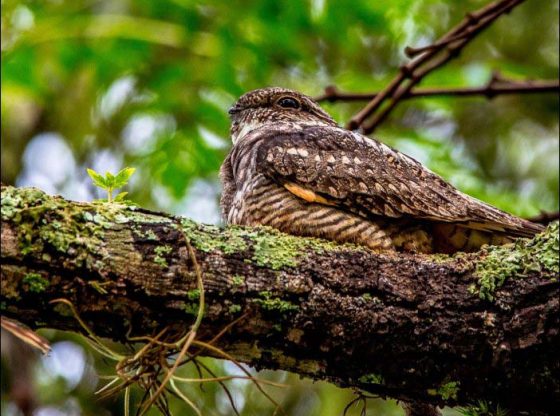 Perhaps not surprisingly, some of the strangest things Out There are things that you don’t even see.  The whippoorwill, or whip-poor-will, is a prime example.  Despite the fact that the whippoorwill’s call is one of the most iconic sounds of rural America, or that the birds are among the best-represented in American culture (alongside the robin and bluebird), most people have never seen one, and can’t begin to tell you what they look like.

They have a large head and a strange short bill creating a flat little face reminiscent of a bulldog or Persian cat (they even have whiskers).  Their legs are short, giving them a movement more like hopping than walking, and their wings are short and rounded.

Even standing still in broad daylight these birds are just plain hard to see as their mottled plumage of blacks, browns, and grays becomes almost invisible on the deciduous forest floor, their natural habitat. 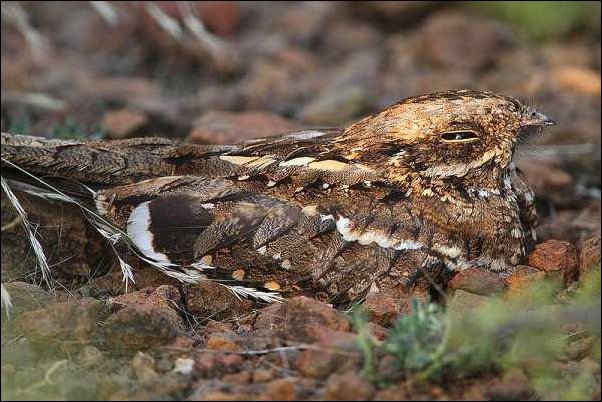 Not only is the whippoorwill a master of camouflage, but she’s also nocturnal, so even if you’ve been hearing that familiar call all of your life, you may never have actually seen the bird in the flesh.

Or perhaps you have.  If you’ve ever been driving along at night and seen a dark blob in the highway ahead that suddenly fluttered away as you approached, chances are, that was a whippoorwill.

The Mohegan Tribe believed that whippoorwills were enchanted little people who moved through the forest at night (a story that’s still hard to disprove to this day) and other Native Americans felt the familiar call of the birds to be a death omen.  This latter belief was adapted by European settlers and it was accepted as fact in the Nineteenth Century, prompting H.P. Lovecraft to later write,

“It is whispered that they linger and flutter around houses where death is approaching, hoping to catch the soul of the departed as it leaves.”

There’s a lot of American folklore invested in the whippoorwill, from Hank Williams’ “So Lonesome I Could Cry“:

He sounds too blue to fly.

The midnight train is whining low,

I’m so lonesome I could cry.”

…to James Thurber’s hilarious short story, The Whip-Poor-Will about a man who is driven berserk by a whippoorwill that roosts outside his bedroom window.  Thurber suggests that the bird isn’t so much an omen of death, as a cause when the protagonist finally murders everyone in his household and commits suicide, all because he can’t get enough sleep due to a whippoorwill roosting outside his bedroom window.

I think these two pieces make a good example of the extremes of appreciation we have for the Eastern Whippoorwill.

Anyone who’s ever heard the beautiful, haunting song of a lone whippoorwill echoing down a country valley will relate to the loneliness Hank Williams wails about, and if you’ve ever had one perch close outside your bedroom window, then you know how loud and infuriating the sound can be, even if it doesn’t quite drive you to slaughter your family.  You may be, as I was, reduced to screaming at the top of your lungs, “will you JUST SHUT UP?” out the bedroom window, but that will only deter them for a few seconds, if at all, and they can go on for hours.

Just in case yours has been a particularly sheltered life, I found this recording for you of a whippoorwill’s call.  In it, you can just hear the part of the call that always piqued my curiosity, that’s the very last note, which sounds like two blocks of wood striking together.  You can’t hear this so well at a distance, but when the bird is close by, it seems quite loud.

Whippoorwills belong to a class of nocturnal birds known alternately as nightjars, or goat-suckers.  The latter stemming from an old belief that they sucked the milk from goats.

Whippoorwills have been known to repeat their call over 400 times without stopping or until someone bludgeons them to death.

Whippoorwills don’t build nests like more conventional birds, they simply lay their eggs on the bare ground, preferring shaded places, or a covering of a few leaves.

Shortly after they’re hatched, whippoorwill chicks begin to move away from each other, scattering among the leaves, and if they don’t, their mother gently pushes them apart, presumably to make them less visible to predators. 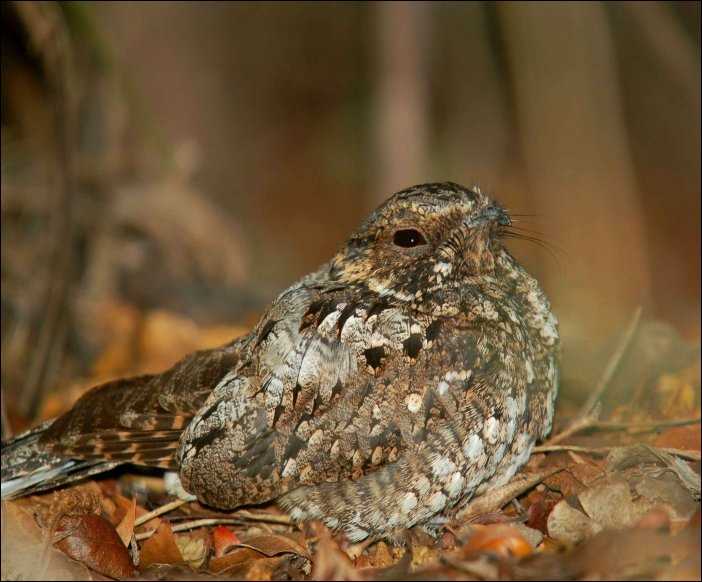 Grown birds have short beaks that open up into cavernous mouths almost as wide as the birds’ whole head.  This benefits them because of the way that they eat and drink.  They feed at night, looking for heavy concentrations of insects such as around a street-light or over the backs of farm animals and fly through the swarms with their mouths open vacuuming in all the yummy mosquitoes, moths, and other flying insects they can hold.  Perhaps even stranger, they drink in the same way, flying over bodies of water while scooping up water in their broad beaks.

The male whippoorwill’s call serves not only to attract females but to establish his territory among other males.  Once he secures a promising date, the male performs a dance for the female which consists of circling her on the ground and touching her with his beak as she nods her head.  During the dance, he repeats what is apparently an effective pick-up line in whippoorwill circles, which sounds like a low, throaty and lascivious “waddle-waddle-waddle?”.  (I inserted the question mark of my own accord, knowing little about the punctuation habits of whippoorwills, but the sound does seem to have the air of a proposition.)  This apparently has the desired effect on the female, and mating commences.

The birds appear to time their nesting such that the moon is always more than half full at the time they are feeding the young.  It’s thought this is to take advantage of the better light while foraging for food and caring for the chicks.