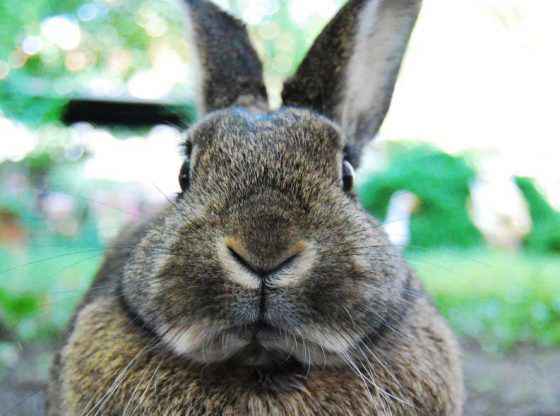 My guy, Larry, wanted to make rabbit stew.  After searching in our area for someone raising meat rabbits, and coming up empty, we checked out ethnic shops in Boston.  Bingo.

We made rabbit stew together.  While it simmered, I kept picturing a cartoon from childhood: Bugs Bunny, bathing in a cauldron, using a carrot as a back brush.  It was tasty, but I kept picturing Bugs Bunny, and cute little bunnies.  After that meal, he stated he wanted to raise meat rabbits.  I said I was on board, but inside I had mixed emotions.

I asked him if he was sure about this rabbit thing.  I mean, he had a pet rabbit as a child, whereas I did not.  He was very sure.

Here’s our tale, embarking on the endeavor of raising meat rabbits.  With me, the entire time hoping we could somehow just keep the bunnies for pets.

I was impatient.  He wanted to wait until the following year and I just stared at him.  The idea of caring for rabbits had become exciting to me.

“Seriously, you expect me to wait a year?”

His response?  Piercing blue eyes staring me down.

“We’re getting everything set up first.  I still have to build—-”

And then his voice faded.  I was already scrolling my cell phone looking for rabbits for sale.  This may sound rude, or downright disrespectful to some, but, for me, it was uncontrollable.

Within a week, I had found rabbits.  They were a mile from our house, and they were under our budget.  Arrangements were made to pick them up that week.

On the day of the deal, we drove to the small farm.  There were assorted animals roaming everywhere.  Except for a rambunctious large breed puppy, all the critters ignored us while they pecked and foraged.

After being greeted by the female proprietor, we were led to the rabbit area.  Cages stacked upon cages was not what I expected.

She pointed to where several huge Flemish does were lounging in a corral.  She explained that she had removed their offspring and put them in cages by sex. 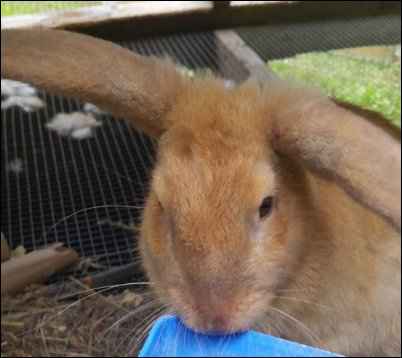 The other thing I did not expect was the variety of colors.  They were not all white; they varied from blonde, to multi-colored, to jet black.

I picked a female bunny who came right over to me.  She was blonde and totally adorable.  Larry picked a grey/blue male, who, while not as outgoing, was husky.  They were smaller than I would have thought at that age, but the farm lady assured us they would get very big.

When we got home, the bunnies were kept in new cages in our spare room, often used for brooding chicks, ducklings, and turkey poults.

I named the doe Sophie Mae.  He named the buck Smokey Joe.

Larry purchased four rabbit cages before we picked the rabbits up.  His plan was to build a wide shelf in the small barn for them.  Out of the wind, out of the way, and utilizing an existing structure seemed logical.  But to me, the cages seemed too small.

“But the cages seem so small.”

Later that day, he drew designs of a spacious, new rabbit hutch.  I squealed with delight.

The rabbits would have to use the cages until it was built, which would not be for a month or so.  I couldn’t imagine them in small cages that long, so I scoured online to find deals on building material.

To my amazement, the next morning, I found an opportunity right in our town: the demolition site of a former car dealership.  They were giving away the building materials for free!  That morning was spent driving back and forth from home and the site, loading and unloading the booty.

After the salvageable materials were sorted into piles, we had enough wood for the rabbit hutch and many future projects.  I had been recycling materials for a long time, but Larry was new to the idea.  He was impressed.

Within a week, Larry had the hutch built.  I was shocked at the unveiling.

“Six adults could sit in there and have a picnic!”

“Why would they do that?” he asked.

Larry winked and went to fetch his tractor.  The hutch was so unwieldy, it tilted dangerously.  I held my breath, certain it would fall at least a dozen times.

We had already chosen a spot for it, but as soon as he neared it, we could both tell it was more uneven than we thought.  The hutch tilted to the point that it hit the ground on one end.

We found a different spot.  The problem was the fence next to it, and a boulder in the way.  No problem (we said with a groan).  Take down one side of the fence.  Move the boulder.  Fill the boulder hole.  Move the hutch into place.  Rehang the fence. 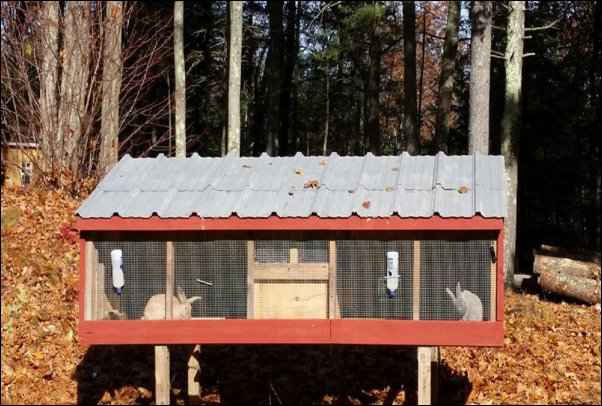 Once in place (hours later than expected), I could admire the hutch.  It was divided into two compartments; his and hers.  Each side had large doors, a nesting box, a water bottle mounted to the meshed front, and feed dish secured to the door.

I asked him if he could maybe build another hutch for future babies.  He groaned and walked away.  Probably not an appropriate time to mention building anything else.

Breeding our Meat Rabbits (aka The Jilted Buck)

A week later, Larry placed Sophie on Smokey’s side.  He pulled up a chair, with the dog and a flock of heritage turkeys, and watched.  And waited.

When I observed him remove Sophie Mae, I joined him.

“So, did they do it?” I asked (or something equally eloquent).

He shook his head.

“Maybe it’s just too hot,” I added.  Kind of anti-climactic (pun-intended), but there was a heatwave happening.

The next time, I joined the audience.  It wasn’t just that they didn’t do it. Sophie Mae wouldn’t let him.  I got dizzy watching them run in circles, him hot on her tail.  Finally, when she turned on him and looked to get nasty, Larry intervened and scooped her up.

I nodded.  Sophie Mae wanted nothing to do with poor ole Smokey Joe.

Back on her own side, Sophie Mae was content rearranging the straw in her house, eating, and sleeping.  I noticed hair fluff in her sleeping box.  I figured she was shedding.

From the moment we brought the rabbits home, we had them on one of the best pellet feed, and alfalfa available in our area.  It was expensive for us, but Larry wanted only the best for them.  In addition to the high-end pellets, and alfalfa, they were given an assortment of homegrown berries, vegetables, and greens.  Water bottles were filled almost daily in the hot weather. 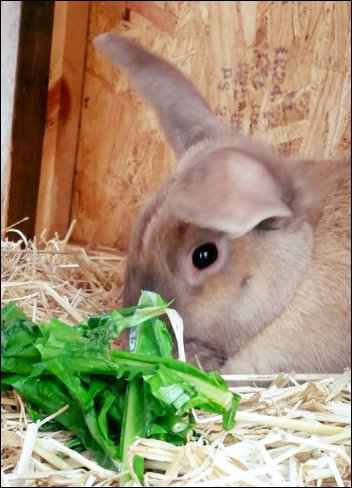 Due to work schedules, the next breeding attempt was put off for over a week.  That morning, Larry came to find me.

“Have you seen Sophie Mae lately?” he asked.

His face was unreadable.  My heart dropped.

He grasped my hand and led me to the hutch.  “Look in her house.”

When I opened the door, I expected to find a dead rabbit.  What I saw was as far from dead rabbit as possible.   Sophie Mae had given birth to a pile of wriggling babies.

We did the math.  It wasn’t complicated.  Seeing as the rabbit gestation period was approximately 31 days, and we only had her three weeks, Sophie Mae was pregnant when we picked her up.

That explained her jilting Smokey.  Sophie Mae was already pregnant.  Now she was a mama.  I tried not to get too excited.  The babies were intended for meat.  Yet still, the wriggling babies gave me a rush.  Sophie Mae gave us her first batch of meat rabbits, albeit with no help from us.  It still felt like an accomplishment. 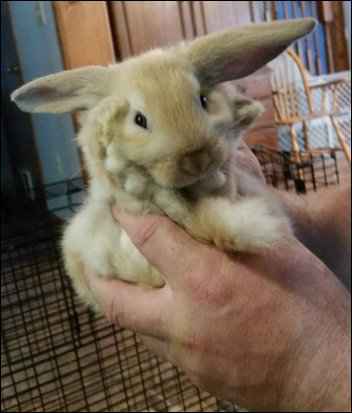 As Sophie’s seven babies grew, we noticed something interesting: neither she nor Smokey grew much at all.

Smokey got a tad bit larger, but he wasn’t filling out as a Flemish Giant should.  We investigated the possibility of worms, health issues, feed issues, etc.

After trying everything, and finally contacting the seller, we concluded that the rabbits were not the kind of mix that makes good meat rabbits.  We were told that they had Flemish blood, but it obviously wasn’t enough.

Once we processed the information—the only thing we would be processing for a while—we discussed options.  I was already attached to Sophie Mae and Smokey Joe, and despite Larry not planning on it, he was too.

While we did not get the batch of meat rabbits we had planned, we made many little girls happy when we rehomed the babies.  Sophie Mae and Smokey Joe continued living with us; their breeding days over before they even started.  They lived in their rabbit townhouse and had access to our fenced-in gardens when not in use.  They still became contributing members of our homestead, as rabbit poo makes great fertilizer.  They were our pets until their deaths.

They are buried behind the herb garden, along with other special pets.

So, while I still have not cooked, nor even tasted, rabbit stew since that first time, I can honestly say I don’t care. We had something better. Two of the best pets we ever had. 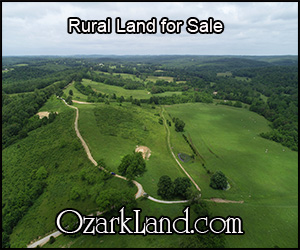